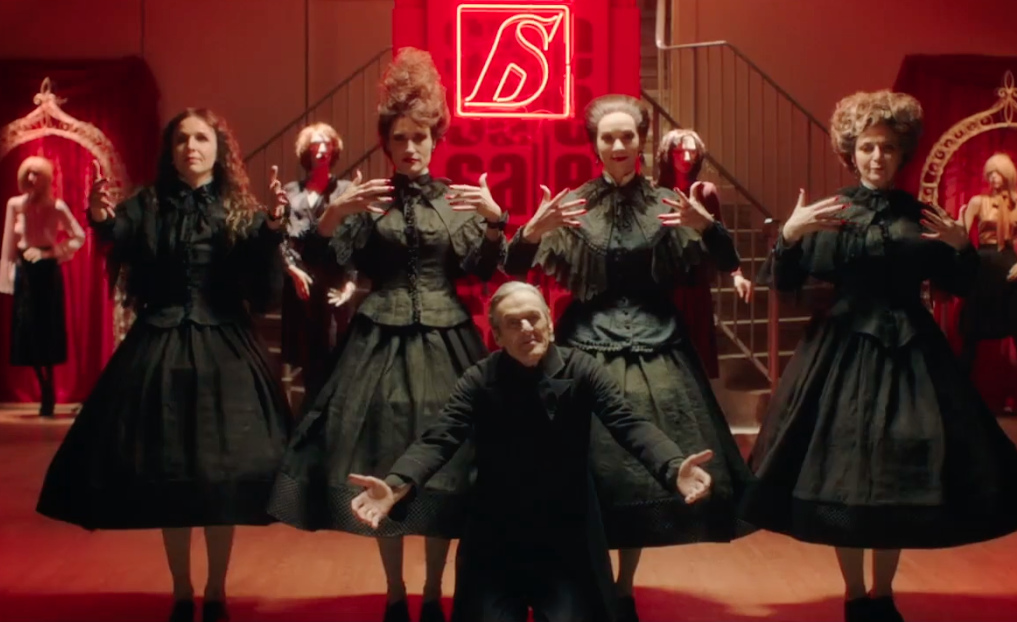 Our obsession with shopping and consumerism is going to be the death of us all — at least, director Peter Strickland seems to think so. The constantly increasing Black Friday crowds and coupon-clipping masses will rue the day they bought that really nice pair of pants at such a great price. Or in the case of Strickland’s latest cocktail of absurdity and horror, a beautiful red dress. In Fabric is a phantasmagoric allegory for our growing obsession with buying into our wants, and losing our souls in the process — and it’s about as weirdly fantastic as it sounds.

Though Strickland may refute that he consciously went for evoking giallo films when making In Fabric (which he did at a Q&A that took place at the midnight screening of the Toronto International Film Festival), it’s difficult not to see the influence. While there isn’t much here in terms of plotting — a red dress makes its way to different owners, affecting their lives in different, negative ways — Strickland focuses more on illuminating the characters’ lives while they have this haunted outfit.

The only real connection between stories is the department store that sells the dress, filled with bald women wearing wigs and saying everything in as complicated and absurd of a way as possible. They move through the interior of the building using dumbwaiters and are managed by a creepy old man who is a professional at customer service. The same model can be found throughout an in-store catalogue that showcases all the latest fashions; it’s an eerily intricate nightmare of normality. The women all essentially cast spells on their customers to get them to buy something, except the spells are just really flattering comments and exceptional customer service. Strickland strikes right at the heart of consumerism with his weird fixation on the ways we’re lulled into parting with our money.

Standing out is the way that the rich atmosphere is presented. In Fabric blends a deadly cocktail of sensuality and dread in every frame, from a red dress lighting up an entire room with its bright colors, to images of its smooth texture overlapping over morbid imagery; every moment in Strickland’s fourth feature is a delight. It’s not necessarily style over substance, but one of the many ways In Fabric falters is how indebted to its editing and visuals it becomes, especially by the second half. Berberian Sound Studio also fell into the same trappings, but where that was used for narrative purposes, In Fabric utilizes it solely for a more textured atmosphere. This lends it a strong voice, but one that drags on too long.

The question that many will wonder as the movie progresses: is this is horror or comedy? The truth is, In Fabric falls more on the comedic side of things. It’s not exactly a scary movie, but it evokes a lot of haunting imagery. Strickland has always written from a more humorous point of view, with maybe the exception being his debut film, Katalin Varga, but this marks the first film of his to just lean into the laughs. It’s absurd and preposterous, but grounded in something we can all relate to in some manner — either the customer service side of things or being swindled into buying something we don’t need.

The appropriately campy performance from Fatma Mohamed as a saleswoman who manages to convince different people to purchase the possessed red dress is one of the greatest delights of In Fabric. On top of that are some of the weirder concepts that the film latches onto and decides to explore — like the semantics of washing machine repair. The monotonous descriptions of washing machines in disarray, and subsequently what parts and procedures are needed to fix them, offers a glimpse at how monotony can be hypnotic.

There’s an allure to everything here, as even its smallest jokes feel representative of some larger conversation about the items we purchase and the meaning (or lack thereof) that we attach to them. Peter Strickland exists within a very unique form of cinema. Here he’s at his most reverential for the medium but also posits his most ambitious and relevant statements. There may not be more than just a simple self-awareness to the act of consumerism, but Strickland at least offers an entertaining satire of an industry we all submerge ourselves into for the smallest deal.

Editor’s Note. This article was originally published on September 17, 2018, as part of our coverage of the Toronto International Film Festival.

‘Greener Grass’ Is a Pain in The Ass

‘The Painted Bird’ is An Incredibly Grim Portrait of Anti-Semitism