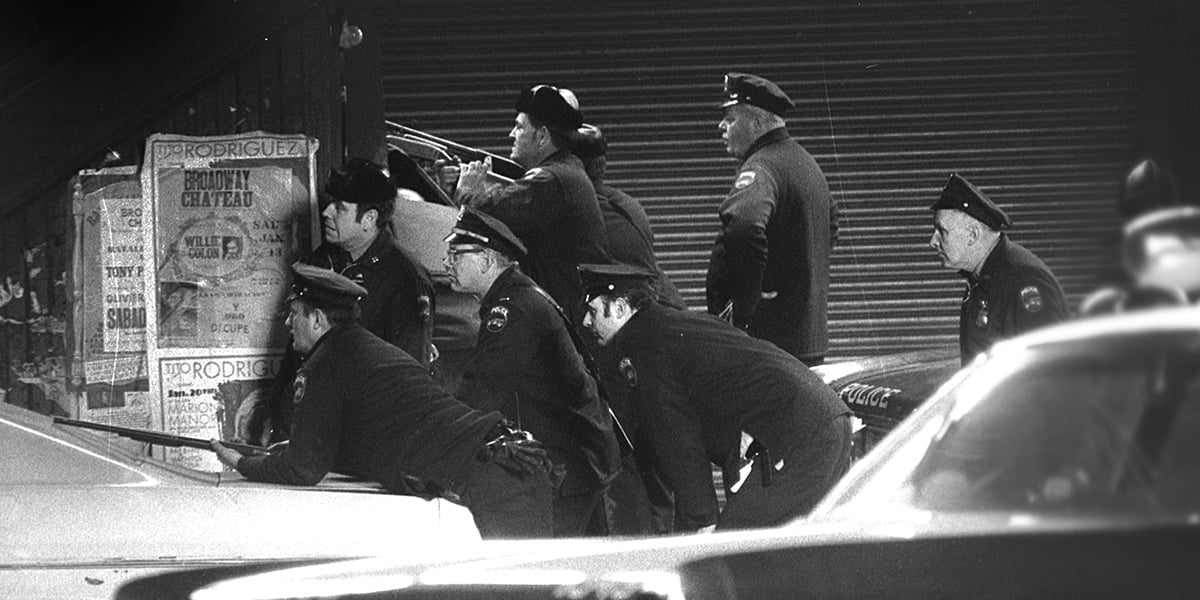 A film about a hostage standoff in New York City in the ’70s can only recall Dog Day Afternoon, as well as the great documentary- The Dog– that told the story of the real-life subject behind Sidney Lumet’s fiction film.

Hold Your Fire, a documentary at this year’s Toronto International Film Festival, is about another such incident,  the Williamsburg hostage situation of 1973. That was when a group of Black Muslims sought to steal guns from a Brooklyn sporting good store — in order to protect themselves against a rival group associated with the Nation of Islam — leading to a days-long standoff (the Dog Day Afternoon standoff, the year before, had just lasted one day). There was gunfire, leading to the death of NYPD officer Stephen Gilroy, but the standoff ended without any further loss of life.

It’s a story that’s somewhat receded from public memory in the ensuing 50 years or so, I’d imagine because Sidney Lumet never made a movie about it at the time. But it ended up a significant case, because it changed the way police, in New York and elsewhere, deal with hostage negotiations.

The police utilized the expertise of Harvey Schlossberg, an NYPD officer who had a doctorate in psychology, and it ended up developing the framework for the modern practice of hostage negotiation. The standoff took place shortly after the Attica uprising — also the subject of a TIFF doc — when police and politicians were looking for ways to ease tensions.

Schlossberg died earlier this year, but not before sitting for interviews for the documentary. Also, no longer with us is one of the robbers, who we learned died decades later- days after receiving parole.

The film from director Stefan Forbes (Boogie Man: The Lee Atwater Story) uses plenty of archival footage from 1973, while also interviewing most of the living people involved, from Schlossberg to the lead robber, to several of the other police officers involved in the standoff. It’s a revealing look at an undeservedly forgotten story- and it raises many issues that are still the subjects of bitter disagreements about crime, race, and policing today.

It’s very clear, from the interviews, that there were disagreements about police tactics to end the 1973 standoff and other standoffs like it. There’s the Schlossberg approach, of peaceful negotiation, and there was the approach favored by a coterie of older retired NYPD cops, who are interviewed on camera and say, well, a lot of the worst things they could possibly say.

Racial prejudice is excused, while racial segregation is defended. We hear phrases such as  “I know for a fact that cops aren’t racist- but there was this impression that cops were going to brutalize Blacks” and “yea, we had the slavery- but think about how great America is!” These guys still seem bitter, decades later, that the situation didn’t end with them kicking ass. It shows, in other words, that the conventional viewpoints of the guys who walked the beat for the NYPD almost 50 years ago, and those of Cop Facebook in 2021, aren’t all that different. On the other hand, there’s Schlossberg, an intellectual who one character describes as “the consummate Jew.”

It’s unclear when Hold Your Fire might find its way to general audiences, but when it does it’s worth a look.