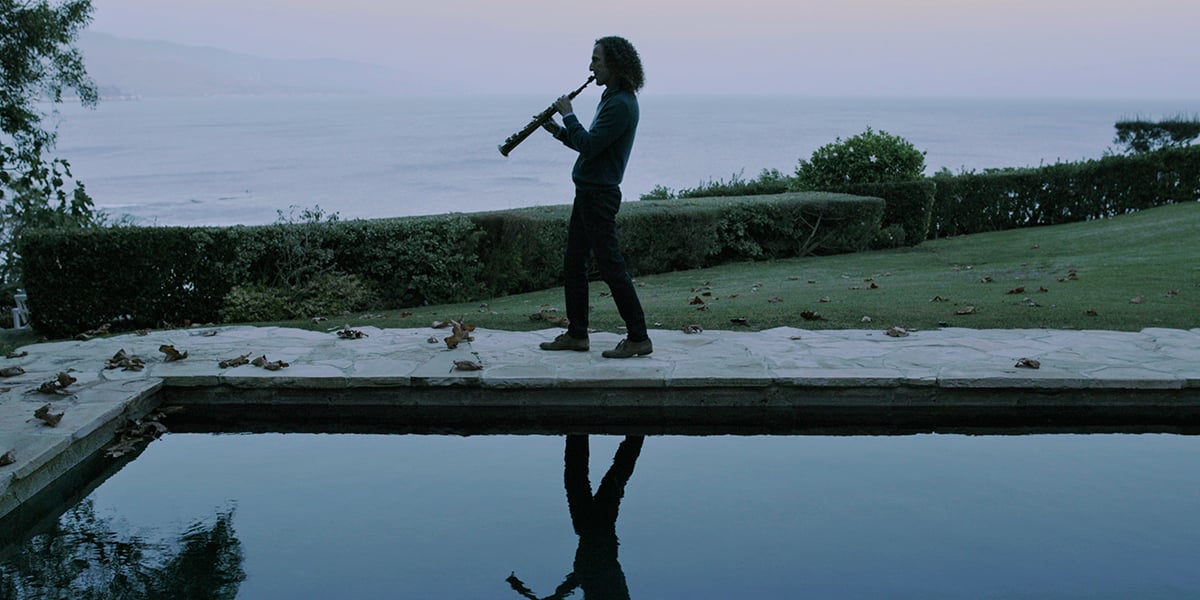 Early in the new documentary Listening to Kenny G, which debuts this week at the Toronto International Film Festival, director Penny Lane asks the famous sax player “What do you love about music,” which is, of course, the same question the boy journalist asked Russell Hammond at the end of Almost Famous. But while Hammond answered “everything,” Kenny’s response to that prompt is “I don’t know if I love music that much.”

That seems like the sort of answer that would vindicate everything that Kenny G’s many, many critics have been saying about him for the better part of 40 years. But for those who love him, it’s just more noise, drowned out by long runs of high-pitched notes from a tenor saxophone.

Kenny Gorelick, the saxophonist known as Kenny G, has been the most prominent figure in American jazz music since the early 1980s, and is the best-selling instrumental performer in music history, selling over 75 million records. He has a sizable, multi-generational fan base of those who have gone to his concerts, listened to him on smooth jazz radio stations and the Weather Channel, and even walked down the aisle at their weddings to his music.

At the same time, Kenny G has long been a widely despised cultural figure, a frequent pop culture punchline, and a man whose work is especially loathed by music critics and serious jazz musicians. These are people who see jazz as a great, sacred American art form, and the music that Kenny plays as a gross, sustained betrayal of that.

Listening to Kenny G, which if not for Summer of Soul would be the best music documentary of the year, is a riotously entertaining examination of that peculiar conundrum, one that’s scrupulously fair to both sides of the argument, and that I could see appealing to those who love and hate the performer. And the tension between those things, somehow, is just magic.

Director Penny Lane would seem a counterintuitive choice for this material. Her last film, Hail Satan?, was about the Satanic Temple, while her earlier docs included Nuts, the story of a quack doctor who attempted to use goat testicle transplantation to cure impotence. But she proves just right for an examination of the Kenny G phenomenon.

Lane’s film shows that the Great Kenny G Debate is, like so much else in American life, an example of the Elite/Normie divide. Kenny G is like Michael Bay, and like James Corden, and even (yes) like Donald Trump. He’s nearly universally loathed and dismissed by the educated, snobby elite, who not only dislike him but can’t imagine anyone they know feeling otherwise. But at the same time, people they don’t know embrace him, in huge numbers.

My takeaway from the film, as someone who is no fan of Kenny but kind of ironically fascinated by the loathing directed at him, is that Kenny G the person is much more interesting than I thought but also, in many ways, kind of loathsome.

There’s some fascinating biographical stuff I had no idea about. The 65-year-old Gorelick, a Seattle native, is a scratch golfer and pilot, and he’s absolutely huge in China. He was also an early investor in Starbucks, which may very well have earned him more money over the years than his hugely lucrative music career. He’s emerged in recent years as a social media success and was even hired by Kanye West to serenade Kim Kardashian by sax on Valentine’s Day in 2019 (the two announced their divorce, just after Valentine’s Day in 2021.)

On the other hand, nothing in the film convinced me that Kenny G is any better of a musician than I thought he was. We’re shown how he puts together his music, which is basically saxophone autotuning.

And even worse, it’s surprising just how not introspective he is. When Kenny is asked by Lane how he feels, as a white guy, getting rich and famous off a musical form historically associated with Black musicians, he implies that the question had never occurred to him before that moment. And somewhat hilariously, he confesses that he’s long aspired to compose film music, something that, 75 million records sold or not, he’s never been asked to do.

Of course, another great thing about the film is the vitriol directed his way. We see YouTube videos of Kenny haters shooting guns at his records, and in one case microwaving them. And then there are the critics, who were clearly encouraged to not hold back while evaluating Kenny’s music.

“I’m sure I’ve heard a lot of Kenny G while waiting for something,” like a dentist or a bank, one critic says. Another calls his songs “a corporate attempt to soothe my nerves.”

The most famous attack on Kenny G though, even beyond those carried out by South Park and Wayne’s World 2, is the one from Pat Metheny, the famous jazz guitarist, who launched a jihad against Kenny about 20 years ago. He famously denounced Kenny G’s “lame-ass, jive, pseudo bluesy, out-of-tune, noodling, wimped out, fucked up playing,” and went nuclear after the G-man partook in the ’90s fad of modern musicians playing along with old records by deceased performers. Metheny went on to denounce Kenny’s “duet” with Louis Armstrong as “musical necrophilia.”

Metheny doesn’t appear in the documentary, although some Kenny critics are even given an opportunity to read aloud from Metheny’s screed. And Gorelick later acknowledges that for his next album, he’s planning to once again duet with a deceased jazz performer.

Listening to Kenny G is part of HBO and Bill Simmons’ Music Box documentary series, which began last month with the Woodstock ’99 doc; it’s set to debut on HBO and HBO Max later this fall. I highly recommend watching it whenever it appears, no matter which side of the Kenny Divide you’re on.