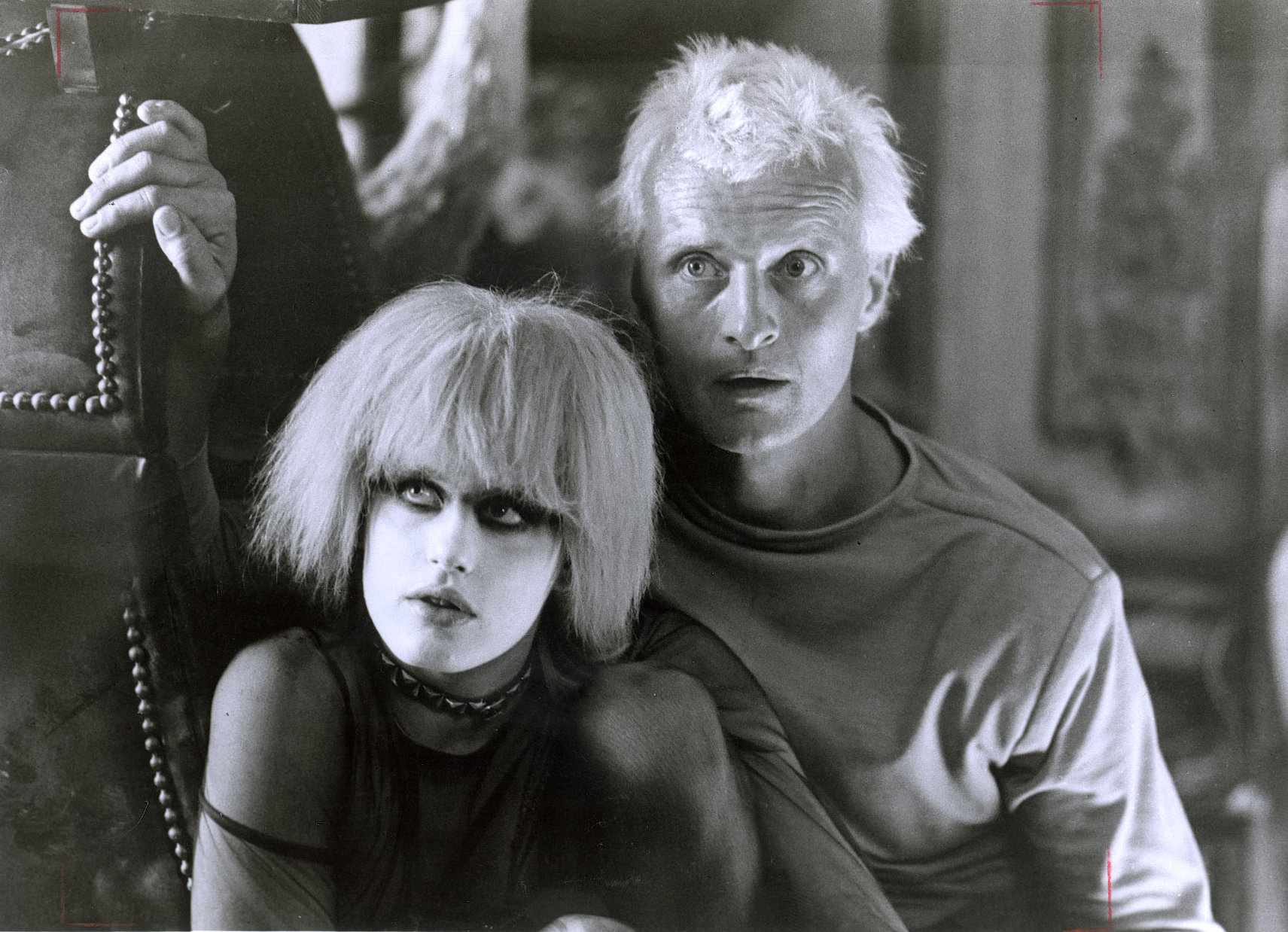 All art is derivative, and Blade Runner is no exception. Art inspires and is inspired, linking the past and present. The human essence is a collective, cumulative, ongoing rite of passage. We define ourselves by our experiences; who we are today is the result of who we’ve been. But humans don’t exist in a vacuum. Our lives overlap and intersect, causing us to challenge the reality we’ve developed. Blade Runner asked the question “What does it mean to be human?” Here we are, thirty-five years later — we haven’t found the answer, but the world of Blade Runner is still looking.

Blade Runner began as the film adaptation of Phillip K Dick’s novel, Do Androids Dream of Electric Sheep? However, it can trace its origins further back to World War II. When he was doing research at UC Berkley, Dick came across the diary of a Nazi officer working in a concentration camp. The officer’s writings describe their horrifying conditions, “the screams of children keeping [him] awake at night.” Dick wanted to explore what could drive humans to act so inhumanely, or rather, robotically. Hampton Fancher, one of the writers for Blade Runner, describes this period of Dick’s life as the origins of his cynical worldview. Fancher would hone in on those moralistic, interpersonal struggles as he drafted the original script for the movie back in 1980. However, these characters still needed a physical space to inhabit.

“It wasn’t until Ridley [Scott] came in that it became an exterior film, a film that had a world. It was […] in hotel rooms, it was in basements, it was a […] 9 million dollar movie that was all about interpersonal relationships.” (Hampton Fancher, On the Edge of ‘Blade Runner’)

Ridley Scott is a controversial figure. He has a history of strained working relationships, high expectations, and an almost militant perfectionism. In spite of all that, Scott’s importance as a director cannot be understated. His vision for the bleak world of Blade Runner conveys the internal struggles of Fancher’s screenplay onto the external struggles of the universe it takes place. Inspired by the French comic anthology, Métal Hurlant, Scott envisioned an urban jungle of towering metal, rain-sodden streets, and neon lights glimmering through the mist. The strength of this vision would more than prove the test of time.

Over the next two years, Scott assembled his production team and cast, setting to work at constructing a dismal, worn, technological future. Unfortunately for his cast and crew, Scott’s near-tyrannical control over the visuals and script meant that they were at his beck and call; Scott worked as an art director, not an actor’s director. For someone like Rutger Hauer, who thrived on freedom, this was a fantastic working environment. For others who were used to more hands-on directors, like Harrison Ford, Scott’s aloofness was difficult to work with. Ford is reported to have spent much of his time in his trailer, only leaving when Scott needed him to shoot a scene. This was one in a gamut of issues on-set, from a lack of communication with the actors to a culture-clashing T-shirt war. In spite of tensions running high, in spite of executives firing Scott and his producer, and in spite of the visual effects running costs over budget, work persisted. On June 25, 1982, Blade Runner released to the public.

Blade Runner‘s initial critical reception and financial returns were lukewarm. It would gain a cult following thanks to the burgeoning VHS market but otherwise flew under the radar until 1990. The original cut of the movie featured half-hearted narration by Harrison Ford, added at the last minute in order to address concerns that the audience would be confused. In May of 1990, a copy of Ridley’s original cut (sans narration) accidentally screened in Los Angeles to surprising effect; Blade Runner could finally be seen the way Scott had envisioned. The dark, cyber techno cynicism of Los Angeles breathed life into the next several generations of video games, anime, and countless more media.

A World That is Familiar, Yet Foreign

In the thirty-five years since Blade Runner‘s release, its effect on the world of sci-fi and cyberpunk is undeniable. Titles like Neuromancer, Ghost in the Shell, and Deus Ex owe much of their inspiration to the 1982 cult classic. Denis Villeneuve, the director of the sequel, cites the movie as one of his primary inspirations to pursue filmmaking and sci-fi. His respect for the original drove him to expand the boundaries in order to find his own story.

Blade Runner 2049 uses the world of its predecessor to develop the foundations for a world that is familiar, yet foreign. The original brought up the notion that artificial beings can, in fact, be human; 2049 takes it a step further and asks what it means to exist as a human. If someone is constructed as a slave, is that their only purpose? Who defines what that purpose is? Denis Villeneuve, 2049’s director, addresses this crisis of existentialism and determines that no one but ourselves can decide what we do.

Denis Villeneuve suffuses Blade Runner 2049 with his unique talent for empathetic direction and fostering collaboration. In a far cry from Ridley Scott’s directing methods, Villeneuve has a reputation for relying on his cast and production team to lend their voices and talent towards the project. In designing the visuals for 2049, he worked closely with Roger Deakins to craft the visual experience. Villeneuve placed heavy emphasis on creating a sense of intimate reality that the characters would inhabit, and his work ethic extends to in front of the cameras as well as behind it (Amy Adams, working with Villeneuve on Arrival, came onto that project after he emphasized that “it was the mother-daughter relationship that lay at the film’s heart.”), placing large amounts of trust in his peers and their ability to understand his vision. While Ridley Scott makes use of his artistic laser-focus to develop the final product, Villeneuve creates the environment for his films to rise organically.

One of Denis Villeneuve’s primary concerns heading into 2049 was the status that the original had garnered over the years. His initial response to hearing about a sequel was “Wow, what an insane, strong, beautiful, great bad idea.” But it was with that mindset that he approached 2049; once he accepted that he wasn’t trying to live up to the original, but instead make his own movie, he was free.

“When I’m working with someone else’s story, I always try to find an intimate way to get into the story, I have to create an intimate link. And one of them, it’s going to sound trivial for you but it was huge for me aesthetically. It was the climate and the screenplay was different than the first movie, it was more like there was the idea that there will be snow, winter will be present. As a Canadian, there’s one thing I know about, that I can deal with, and it has a strong influence and strong impact on the light, on the atmosphere. […] To approach Ridley’s universe through the lens of something that is so familiar to me, it helped me to define what I will keep from the first movie, and what I will enhance, and what I will create different to make it my own.” (Denis Villeneuve, Denis Villeneuve: “Blade Runner 2049” | Talks at Google)

Two Sides of the Same Coin

The original Blade Runner has stronger ties to the neo-noir aspect: a haggard cop called back into duty falls for the sharp, seductive woman; he runs through the grimy, misty city streets, and gets his hands dirty to catch a perp, learning there’s more to the case than he initially thought. The characters in the 1982 film act more as vehicles to address the lofty question of “What does it mean to be human?” That’s not to say that the characters in Blade Runner lack depth — far from it. Rather, Ridley Scott chose to construct the narrative around strong themes and a visually dynamic world.

2049 takes a different approach and frames the story from the perspective of Officer K, played by Ryan Gosling, allowing Denis Villeneuve’s strong sense of empathy and emotion to tell a more personal story. In the original, you never truly get a sense of who Deckard, Rachael, or the replicants are; they (mostly) have strong motivations, certainly, but they never follow a narrative arc. 2049 follows Officer K as he discovers what his purpose is. Multiple conflicting emotions and motivations drive him, further exemplifying how complex and human he is.

“Working with Denis, it was very clear from the beginning that he had a kind of thousand-yard stare. He was looking at something on the horizon that we couldn’t quite see, but he saw it. He was a fan of the original film, but he never seemed intimidated by this process. He turned his admiration into inspiration, and he inspired that in all of us.” – Ryan Gosling on working with Denis Villeneuve

The movie doesn’t explore what it means to be human; instead, it explores what it means to be human in a cold, callous world. K at the end of the movie is a different character than K at the beginning of the movie. One of the key themes behind 2049 is this existential notion of free will; how do you define your reality? It’s a slower-paced movie that delves into the individual aspect of humanity rather than the abstract philosophical side of it. The audience follows K’s journey of self-doubt, love, and identity as he struggles with his purpose in the greater scheme of things.

Scott did the heavy lifting of creating a worn future rich with detail and conflict. Thirty-five years later, Villeneuve has stepped into this world and given it context through the lens of humanity. The questions that 2049 asks are (debatably) not as grand or lofty as the original; it operates on the assumption that yes, replicants are just as human as humans. With that notion firmly established, it delves deeper into the personal aspects of replicants within society. This dirty, dystopian, cybertechnic future built in 1982 acts as the springboard for any number of stories to jump off of. Hopefully, Denis Villeneuve’s story is the first of many that will dive into this world.

For further reading on Blade Runner: 2049, check out Patrick Murphy’s review of the movie.