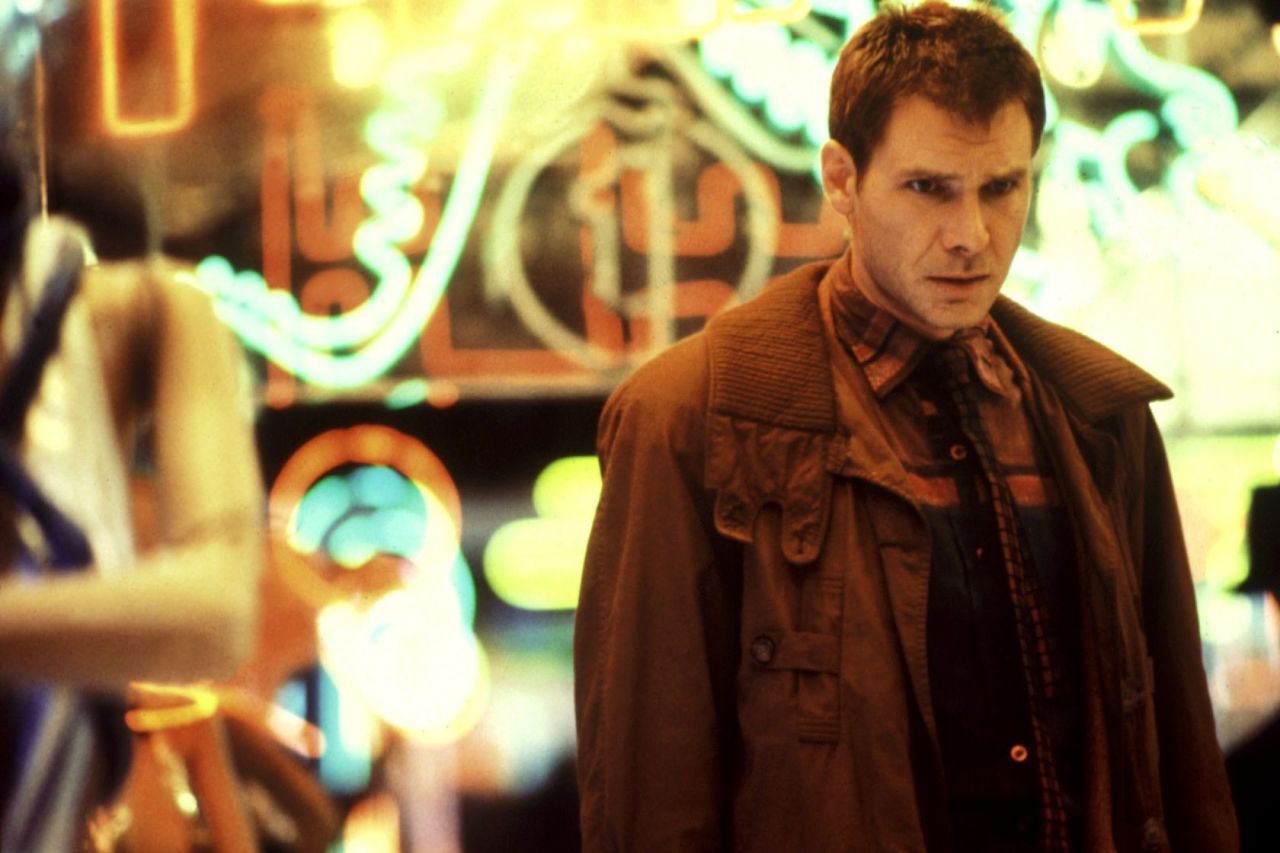 Rarely does a film owe its cultural significance and ultimate legacy to a vibe, a cinematic aura that not only radiates across its storied runtime but one that has transcended onto the palette of other seminal works. Ridley Scott’s Blade Runner was released in June of 1982, and it transformed the visual language of sci-fi, cementing an all-new look, atmosphere, and world in its creation of the cyberpunk style. All the while being a box-office flop.

In the decade preceding Blade Runner, the predominant sci-fi look was defined by either baroque adventures that featured highly ornate productions or minimalist dystopias that were blanketed in uniform hues. The former’s peak is undoubtedly felt in the gargantuan impact of Star Wars and its operatic traversal of lush planets, while the latter was defined by the stark negative spaces its characters inhabited, as seen in George Lucas’ THX 1138 and Stanley Kubrick’s A Clockwork Orange.

Ridley Scott and industrial designer, Syd Mead, combined these two approaches. Fusing them together to generate an environment that tapped into a melancholic beauty. Its dystopic future was submerged in a vibrant neon world that both enticed and repelled. The film’s Los Angeles is the perfect distillation of future technological dependency and an impending “Asianization” of western culture. Scott and company embraced the surfeit of neon that enveloped the commercial districts of Asian cities like Hong Kong and Tokyo during the ‘70s and ‘80s by making its retro-futurism a key aspect of the film’s ethereal and timeless landscape.

While this form of urban design has become widely accepted and celebrated, it was first solidified by Blade Runner. Moreover, it’s hard to deny the cultural impact Asian cinema, music, and fashion have since had, making this vision of an eastern America more resonant now than ever before.

The visual flair of Blade Runner’s cyberpunk aesthetic has unquestionably seeped into the annals of popular culture, as its philosophical quandaries concerning artificial intelligence have ushered in a generation of filmmakers defined by a penchant for stark futurism. Oshii’s Ghost in The Shell, Besson’s Fifth Element, and the Wachowskis’ Matrix have all used the film as a visual criterion. It’s hard to watch any sci-fi film and not only see but feel the remnants of Blade Runner’s cinematic design. It’s as if the genre can be split into two periods, one before and one after its monumental release.

Any discussion of Blade Runner and its infectious ambiance would be incomplete without touching on its majestic soundscape. Vangelis (who recently passed away) perfectly mirrors the film-noir and neon-drenched future envisioned by Scott. At once it’s both intimate and all-encompassing, as its combination of classic composition and future synthesizers imbue the film with jazzy undertones that capture the loneliness of living in this glossy, yet superficial metropolis. As the film delves deeper into the city’s seedy underbelly, electronic notes begin to permeate the film, lending an utter tangibility to its world. Even as the film reaches its philosophical and emotional climax, sweeping synths envelop the senses, submerging the viewer deeper into its urban decay. Vangelis has truly crafted the perfect film score.

Despite its visionary impact on the industry, the film was a box office disappointment, raking in only $41 million on a $30 million budget. June of 1982 was a landmark month for movie theatres with E.T. the Extra-Terrestrial, Star Trek II: The Wrath of Khan, and Poltergeist dominating the box office. Their overarching success unsurprisingly left little room for the film to prosper. Besides, the optimism of Reagan’s early years in office made the sentimentality of offerings like E.T more appealing than the cynical vision of America put forward by Blade Runner. Only after the rise of home video would the film obtain its legendary status and the existence of a sequel, 35 years later, affirms the film’s cult status and visionary influence.

The film’s production was also not without complication, as the studio demanded changes to the final edit, such as forcing Harrison Ford to record a voice-over narration without Scott’s input. The voice-over was so awful, that many assumed Ford had deliberately phoned in the delivery in the hopes the studio wouldn’t use it. The film’s original theatrical cut fell short of Scott’s vision, and it resulted in various other versions being produced. The 1992 director’s cut finally omitted the voice-over and “happy” ending, while the 2007 “final cut” refined these changes to become the more definitive and cerebral version.

Even with its tumultuous production history, the inferior versions still boast the very best of what the film had to offer: Its chillingly beautiful dystopia engulfs the senses, its androids called “Replicants” were simultaneously terrifying and sympathetic, and Rick Deckard’s charismatic detective absorbingly hunted them down.

Blade Runner is the perfect storm of classic storytelling, bold ideas, and lavish visuals. Its lived-in world feels truly authentic, even though it has never existed. In a late scene, Roy Batty, the leader of a rebellious group of androids, meets his creator and demands “more life”. While the film never gave it to Batty, it did give life to a modern vision of sci-fi that will undeniably remain the standard for years to come.

The Man From Toronto is Stale, Humorless Fluff