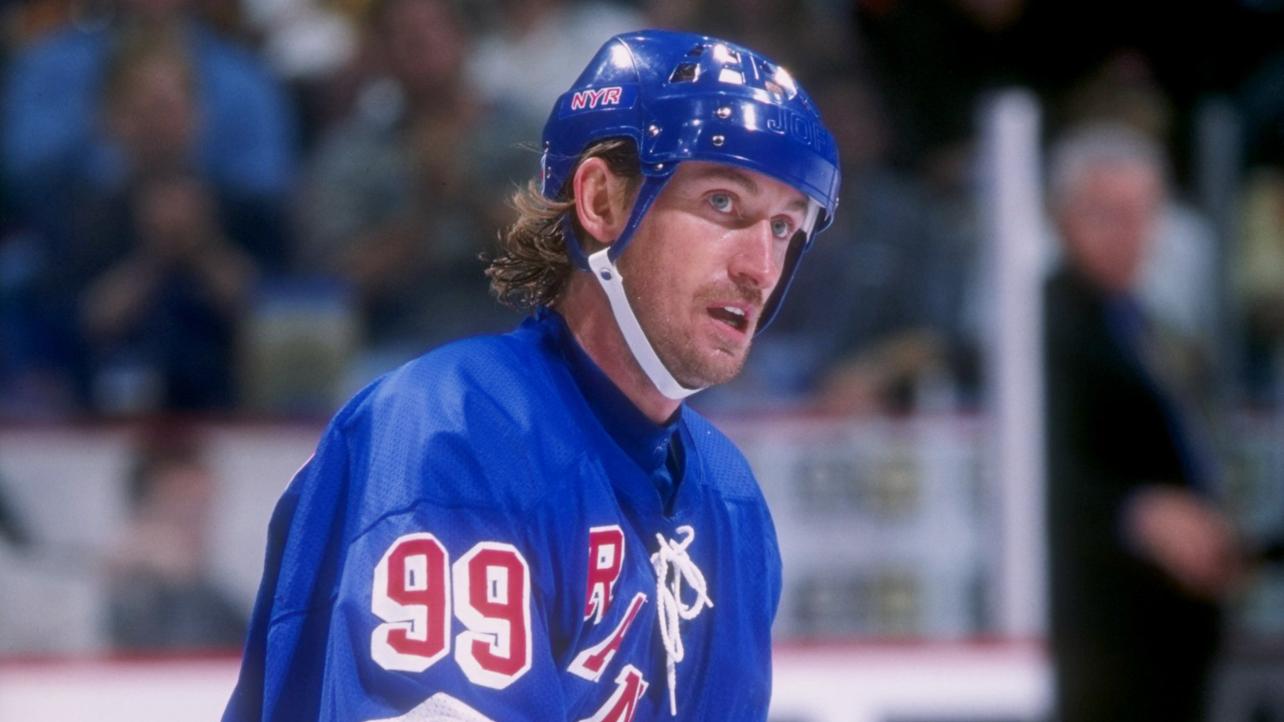 Number 99. The Great One. Wayne Gretzky.

On December 1st, 1996, the Brantford Ontario native, then aged 35, was playing on his fourth team overall and third different one in three successive seasons. The New York Rangers acquired the Great One during the summer offseason after a one-year stint in St. Louis under coach Mike Keenan ended poorly. By then he had already surpassed another icon, Gordie Howe, as the all-time leading goal scorer, and attained 2,000 points all-time. But what else could he do? Why not go for 3,000 points overall (regular season and playoffs combined)?

To put his accomplishments into context, consider the following. He’s a multi-time Stanley Cup champion (4), Art Ross Trophy winner (10 times as regular season points leader), Conn Smythe Trophy winner (2 times as the Most Valuable Player in the playoffs), Hart Memorial Trophy winner (9 times for Most Valuable Player in the regular season), and Lady Byng Memorial Trophy winner (5 times as the player demonstrating good sportsmanship). Simply put, there have been few if any other players like Gretzky in the history of the National Hockey League (NHL). He is, essentially, in a league of his own. Case in point: from 1983 through 1986 he tallied 200 points in three consecutive seasons. Outrageous.

There exist several compelling aspects and storylines to watching an aging professional athlete play out their final seasons. Witnessing greatness in the twilight of its existence has a romantic, bittersweet air about it. Those players will show flashes of the unparalleled brilliance they once displayed at every opportunity, prompting admirers to utter “Hey, they’ve still got it!” In the case of the untouchable legends, it can also be a case of seeing what new record or plateau they can shatter.

For the 1996-1997 campaign, number 99 rejoined forces with Mark Messier, a favourite teammate of his from the glory days of the 80s when they both suited for the Edmonton Oilers. A quirk of fate made it so that while the Great One’s Stanley Cup tally remained at 4, Messier won a 5th Cup with the Oilers after Gretzky departed. He subsequently led the Rangers to a Cup in the 1993-1994 season for his 6th. Ironically that most recent championship run with the Rangers was accomplished under coach Mike Keenan just before the controversial personality left to coach the Blues.

New York, now under the guidance of Colin Campbell, was a decent if unspectacular team. Gretzky and Messier weren’t getting any younger even though they still played at a top level. While the roster featured other veterans like Brian Leech and Adam Graves, it was telling that the two former Oilers were the ones who ultimately led the team in points, Gretzky finishing with 97 and Messier 84.

The stage was set for December 1st, 1996, when the Montreal Canadiens visited Madison Square Garden. Gretzky wasn’t performing quite as he used to as far as goals were concerned, but as a playmaker and assist man he was just as essential as ever to his team’s success. That season alone he netted 25 goals and added an impressive 72 assists in 82 games. A far cry from his god-like tallies in the 1980s and early 1990s, but no one would argue that he wasn’t a key component to how well the Rangers would perform that year.

Neither New York nor Montreal was having seasons to write home about. For all the hubbub surrounding Gretzky’s arrival in the Big Apple, at puck drop the squad had only amassed 9 wins against 13 defeats and 4 draws (back when regular games could conclude in a tie). The visiting Habs were still experiencing a post-Patrick Roy hangover. The previous campaign saw them finish 6th in the East and, incidentally, fall to the Rangers (pre-Gretzky) in the first round of the playoffs. They were 10-12-4 at the start of the game.

A Rout and Record

At the risk of bursting the bubble of excitement, the match’s result was never in doubt. After Montreal opened the scoring thanks to forward Mark Recchi’s 13th of the season, the Rangers pestered Montreal netminder Jocelyn Thibault for a whopping 46 shots on goal. New York pulled even 1-1 through Sergei Nemchinov, and from then the home side found its stride.

Sitting on 2,998 regular season and playoff total points, Gretzky’s next came on an assist to Luc Robitaille’s goal in the 2nd period that increased the lead to 3-1. Then, in the third period of a game the Rangers controlled, the Great One set a new record. His 10th goal of the season made it 5-2 and, more importantly, meant he became the only player in NHL to amass 3,000 total points in both the regular season and playoffs. No other player has ever done so.

Heck, no other player has reached 2,000 points in the regular season alone! His closest modern-day competitors are Sidney Crosby (1,440) and Alexander Ovechkin (1,433), and both are closer to the end of their careers than they are to the start.

Wayne Gretzky spent the final three years of his illustrious career wearing Rangers colours. He never won another Stanley Cup. In the 1996-1997 campaign that saw him shatter the 3,000-point ceiling, New York finished with a decent 38-34-10 record, good for 4th in the Atlantic division. Gretzky mustered some old-time post-season magic, leading his team to the Eastern Conference Finals where they ultimately kneeled before the Philadelphia Flyers 4 games to 1. His playoff statistics were quite good in fact, scoring 10 ten times and assisting on another 10 of his teammates’ goals.

Wayne Gretzky would retire at the end of the 1998-1999 NHL season. Even then, at 38 years old and playing on a sputtering squad, he tallied a solid 62 points in 70 games. Few of his major accomplishments will be equalled. He broke so many records and hit so many vertiginous plateaus, there’s a reason why this 3,000thpoint is highlighted despite that regular season and playoffs statistics are very rarely intertwined. He had basically done everything else.