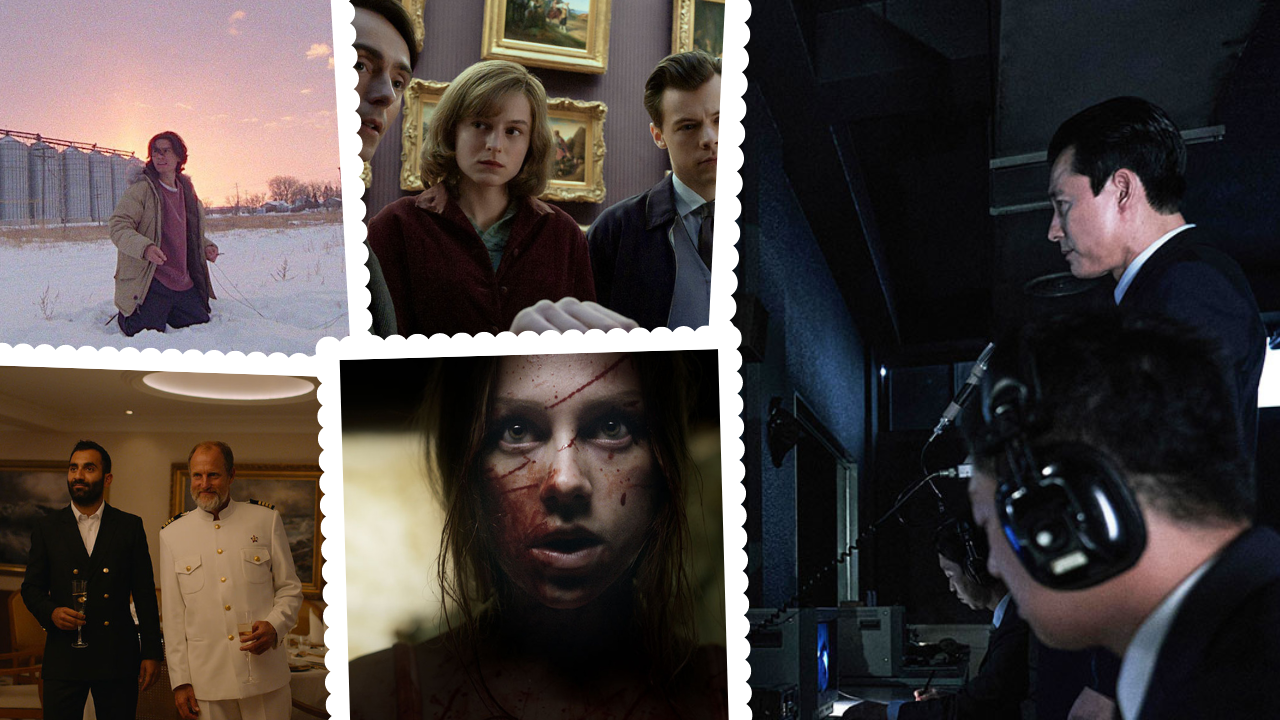 Our Most Anticipated TIFF 2022 Movies

The 47th edition of the Toronto International Film Festival might be the most promising yet. After a couple of years of lockdown and uncertainty regarding the future of in-person screenings, Toronto’s prestigious festival is gearing up to make a significant return with some of the splashiest films of the Fall circuit. With roughly 200 films making their International, North American, or World Premiere, including films from prolific directors like Steven Spielberg, Darren Aronofsky, Park Chan-wook, and so many more, the line-up for this year’s festival is one of its most exciting in recent years.

This year, the festival will feature a small selection of films available to view at home, including the latest from Werner Herzog and John Hyams, allowing audiences from around Canada to still get a taste of the festival experience. However, this year sees three of Tilt Magazine’s writers heading to Toronto to cover the festival in-person and explore this year’s most promising films primed to set up the fall and holiday film season. Below you’ll find a helpful guide to what films we’re looking forward to the most:

The bulk of Steven Spielberg’s movies are about childhood, in one way or another, but The Fablemans is officially about that, even more than most. Spielberg’s first-ever TIFF debut, the film tells the story of a young boy who aspires to be a filmmaker. He’s played by Gabriel LaBelle and joined in the cast by Seth Rogen, Michelle Williams, Paul Dano, Julia Butters, and, yes, David Lynch. (Stephen Silver)

Glass Onion: A Knives Out Mystery

The original Knives Out played at TIFF in 2019 and was one of that year’s most liked films. Now, the sequel, made for Netflix, is coming to Toronto as well, with Daniel Craig’s Benoit Blanc joined by an otherwise new cast that includes Edward Norton, Kathryn Hahn, Janelle Monae, and Leslie Odom, Jr. Writer/director Rian Johnson, of course, returns. (Stephen Silver)

Whether it’s about Robert Evans, Kurt Cobain, or the day of the O.J. Simpson chase, documentary filmmaker Brett Morgen is great at assembling footage. Now, he brings that sensibility to David Bowie, for a documentary about the late rock star that is authorized by Bowie’s estate. The film comes out in theaters not long after the festival. (Stephen Silver)

Judd Apatow is listed as a producer of this TIFF-premiering comedy, which is clearly meant to recall the combination of raunch and heart from Apatow’s studio pictures in the 2010s. Except, you know, gay. Billy Eichner, who co-wrote the film with director Nicolas Stoller, is the star as a single gay man out for love and much more. (Stephen Silver)

Darren Aronofsky is no stranger to piercing and expertly crafted character dramas, look no further than Black Swan and The Wrestler. But his latest outing, The Whale (adapted from a stage play by Samuel D. Hunter), has a unique ace up its sleeve-a 600-lbs Brendan Fraser who looks equally repulsive and endearing. In what’s shaping up to be a career-defining performance, Fraser is starring as a reclusive English professor who is trying to reconnect with his estranged daughter (Sadie Sink, The beloved “Sam” from Stranger Things). (Prabhjot Bains)

With Triangle of Sadness Swedish satirist, auteur, and cinematic provocateur, Ruben Östlund, joins a rare collective of two-time Palme D’or winners. Garnering widespread acclaim from modern classics like Force Majeure and The Square, his latest offering may possibly be his most confrontational and biting satire yet. This time he takes aim at the idle 1%, exploring the hypocrisy, greed, and unquenchable thirst for power their lofty lives revel in. It’s Bunuel by way of Godard, and it truly seems like no one will be spared from Östlund’s incendiary sights. (Prabhjot Bains)

Is My Policeman the film that will establish Harry Styles as a serious actor? That remains to be seen, but with its ensemble set to receive the TIFF Tribute Award for Performance, it might very well be. Set in 1950s Britain, Styles stars as a policeman Tom who perfectly fits into the mold of what’s expected of him, especially when he sparks a romance with schoolteacher Marion (Emma Corrin). Yet, once the two meet Patrick, a museum curator, Tom begins to explore a new side of his sexual identity, cementing a love triangle that will irrevocably change their lives forever.  Michael Grandage’s film will not only scratch an itch for die-hard Styles fans but for those clamoring for a beautiful and reflective romance. (Prabhjot Bains)

The directorial debut by South Korean actor Lee Jung-jae has all the pedigree behind it to be another standout action film from the country that has seen huge international success thanks to recent exports like Parasite and Squid Game. In fact, Lee’s starring role in the latter will likely pique the curiosity of many who only know the actor from the popular Netflix series. However, the popular actor has been in many acclaimed films from The Thieves to New World to The Housemaid, and his new film sees him star alongside Jung Woo-sung (who also has his directorial debut appearing at TIFF this year with A Man of Reason) – another actor whose credits are no slouch, including the wildly entertaining The Good The Bad The Weird.

Hunt already has a plot that echoes some of Lee’s best films with its emphasis on double agents and moles. Promising a character-driven action film set in the 1980s after a failed assassination attempt on the South Korean President, it’s the backdrop of tensions between North and South Korea and the suspicions that no one is who they seem that presents Lee’s film as a powder keg ready to explode. Action-heavy set pieces strung throughout a game of cat-and-mouse only further the tension and adrenaline-fuelled chaos awaiting audiences.

Where Hunt promises to be polished to a tee is in the crew behind it. Lee Mo-gae, whose recent credits include the tense disaster film Emergency Declaration, will be lensing Lee’s film. His work on some of Kim Jee-woon’s films such as I Saw the Devil and The Good The Bad The Weird are remarkable enough that on top of recent films, he’s very clearly able to shoot kinetic action. Aided by editing from Kim Sang-bum (a Park Chan-wook regular), there’s no denying that Hunt will undoubtedly be one of the best-looking films of the year. Lee’s very clearly wrangled as much talent as he could behind and in front of the camera to ensure that even if his debut is not the best, it’s certainly going to be a rush. (Christopher Cross)

How to Blow up a Pipeline

Andreas Malm’s 2021 non-fiction novel, How to Blow up a Pipeline: Learning to Fight in a World on Fire is an incendiary work that posits the only effective means of solving climate change is through sabotage. Accepting a fatalist attitude or merely protesting through pacifist methods is not enough to make a significant change. Those familiar with the environmental activism at the heart of Paul Schrader’s First Reformed (another TIFF Official Selection) seem primed to engage with Daniel Goldhaber’s loosely inspired take on Malm’s novel, simply titled How to Blow up a Pipeline. Premiering in TIFF’s Platform selection, which is its own little competition within TIFF’s line-up, Goldhaber follows up his critically acclaimed 2018 feature debut, Cam, and seems set to be a fascinating follow-up film.

Centered around a climate activist who finds herself angrier than ever after the death of her mother from a heat wave, she very quickly shifts from non-violent protest to sabotage and destruction to finally make a dent in the fight for climate change. Securing a crew of individuals, each affected by the climate crisis in their own way, How to Blow Up a Pipeline follows the group as they attempt to destroy a West Texas pipeline. With a promising ensemble of young actors who have been quickly on the rise, as well as returning crew members from his 2018 film, Goldhaber has got himself a crew more than ready to pull off making an excellent sophomore feature.

A haunted apartment complex. Cosmic horror. The mafia. From the director of Sleep Tight and Rec comes a movie that feels specifically written for a Midnight Madness crowd. Those unfamiliar with Jaume Balagueró’s work will be in for a treat as the director usually finds himself mining depravity for all its worth and Venus sounds like no exception. Set in the outskirts of Madrid and following a go-go dancer who comes into contact with a bag of designer drugs owned by the Mafia that runs the club she works at, Balagueró’s latest promises to be grimy and bloody as it navigates the fringes of society.

It’s where the go-go dancer ends up hiding away from the Mafia that leans truly demented as Venus finds itself inspired by the short story, “The Dreams in the Witch House”, written by H.P. Lovecraft. A run-down apartment building called “The Venus” plays home to sinister forces that invade the tenants’ dreams turning their living arrangements into a living nightmare. While Lovecraft adaptations can be very hit-or-miss, it’s promising to see a director who doesn’t tend to lean cosmic go into that realm. Especially a director who isn’t prone to flinching at madness. The TIFF write-up from Midnight Madness programmer Peter Kuplowsky promises that Venus “piles on the blood and bombshells like a double bill of Demons 2 and The Sentinel”. It’s hard not to see that being true here, especially given Rec’s single-location setting being mined for all its worth and Sleep Tight being the twisty thriller that it is. If Venus doesn’t quite live up to the pedigree of Balagueró’s previous films, it most certainly won’t be from a lack of trying. At the very least, it’s got nightmare fuel written all over it. (Christopher Cross)