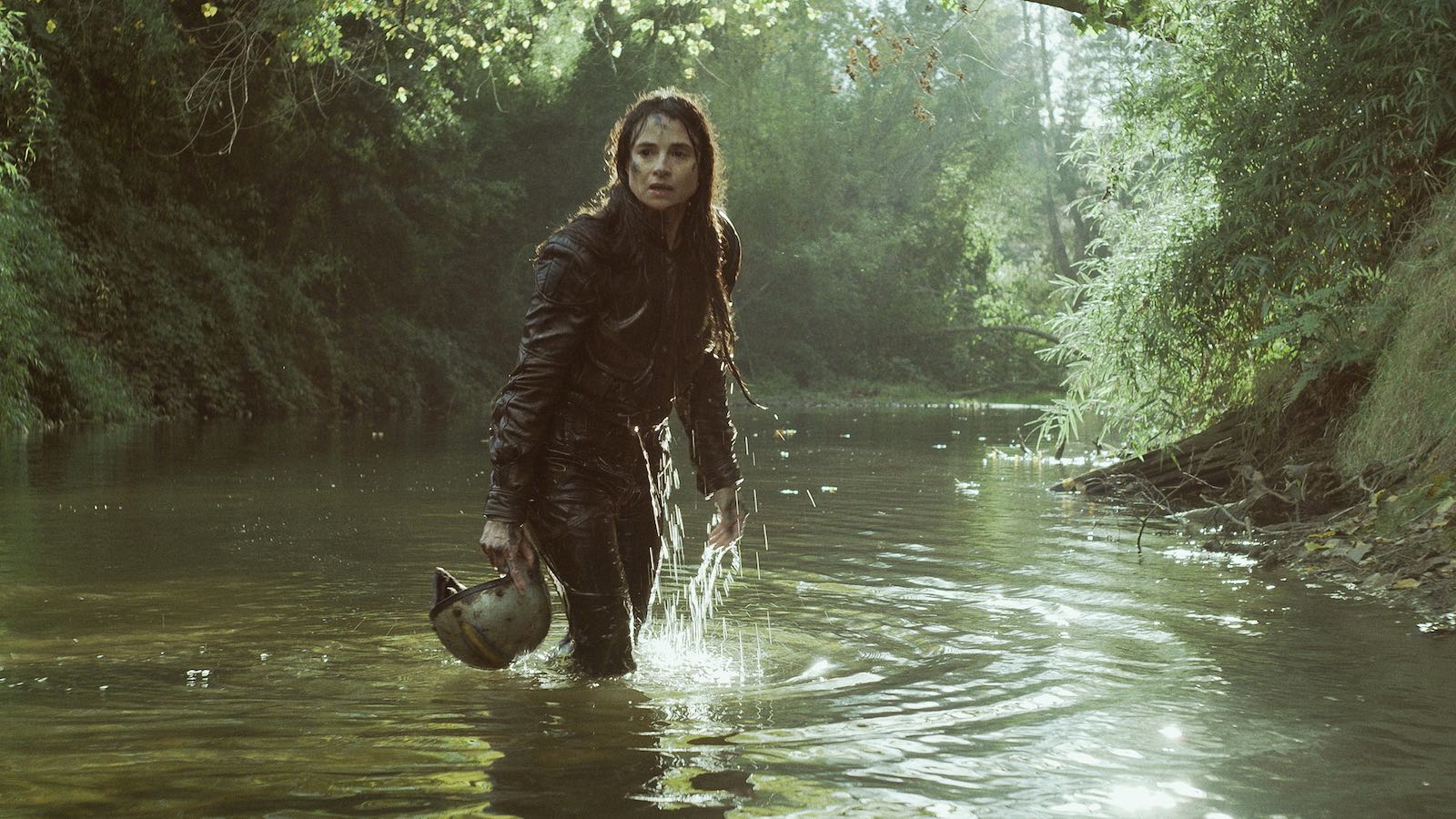 Chilean filmmaker Francisca Alegria makes her feature-length debut with the obtuse The Cow Who Sang a Song Into the Future. Given the title, some may be led to believe the movie is a comedy. It isn’t. Not entirely. Not all the time. Sometimes. Other times it’s an inter-generational family drama, an ecological message film, a ghost story, a tale about queer identity, an art-house project, and a science-fiction yarn. That’s an impressive list of ingredients to pack into a movie that runs under 2 hours. Does it all work? It’s hard to say. Not as much as it should? It’s quite the puzzle.

Cow begins with the camera slowly drifting above a river somewhere in Chile while soft, echoey vocals chant a wistful song about the past, the present, the future, and death. In a certain shot it looks the fish are singing, although it is revealed that the poor water quality is killing them off. As the river’s inhabitants move from this life to the next, a human emerges from the next life back to ours. Magdalena (Mia Maestro) who drowned many years ago in the same river, emerges from the water, still looking young and wearing the biker gear she wore on the day she committed suicide. Mute, she drifts through the modern world until ultimately reconvening with her bewildered family. Old wounds are re-opened, especially with her now grown-up daughter Cecilia (Leonor Varela) and her husband Enrique (Alfred Castro).

A whole lot more happens than what is described in the above plot synopsis. If we tried fitting everything in, the entire review would be a description of what transpires. Therein lies the single largest issue with Francisca Alegria’s movie. There are many interesting ideas but it’s overstuffed. Had the film been a strange fable about how the water’s pollution is bringing back the dead, that would be neat. Had it been about a family ghost coming back to offer her loved ones a final opportunity at reconciliation, that would be fine. Maybe about how a ghoul assists a family unit hampered by strained relationships (Cecilia struggles to reconcile with her son’s new identity as a woman), would be interesting. Heck, if the plot was how a friendly specter haunts a dairy farm, there would be a unique, silly hook.

Alegria puts all of that into The Cow Who Sang a Song Into the Future. Even the title can’t help itself from overdoing it. And Magdalena putters off for a bit to hook up with a biker gang, and a nearby pulp factory is tarnishing the quality of the local river, and the dairy farm is struggling to survive. It just goes on and on and on. At the risk of sounding blunt, it feels like a first-time feature-length director struggling to trim the fat off their script. After a series of shorts, they decide to make their big movie debut but can’t help themselves from injecting every idea that sparks in their mind.

What results is a series of tangentially related episodes, some of which are compelling, others less so. There even is a stretch during which Magdalena is offscreen and the family members go about their struggles as if there the re-emergence of a dead person hasn’t happened. Is it intentional on the director’s part? Is there so much plot that in the filming and editing process some of the overall tone was temporarily lost? The most unfortunate symptom of films like this exhibit is that when they try to be about everything, they end up being about nothing. Yes, the general counterpoint can be that Cow is about everything the filmmaker wants it to be. That doesn’t mean it’s the best way to tell a story.

It isn’t even as if the movie is outright poor. Mia Maestro plays an incredibly weird role that brings with it a plethora of challenges. Her mute Magdalena mostly knows her way about and recognizes the places and people she sees, but there is constantly something that feels off about her persona. She’s aloof, distant. She is clearly not of this world. Some of the dialogue is charged with wit and cleverness. There is an elderly housekeeper where the family is staying and her initial reactions to seeing Magdalena for the first time in years are brilliant for their existentialist comedy.

The film also looks very accomplished. Cinematographer Inti Briones does wonders with everything he has to work with. Whether it’s shooting fish underwater, a dirtied Magdalena confusingly roaming a country road at dusk, a rain-drenched farm, or cows getting lost in the nearby forest at night. All his flourishes help evoke the film’s overall oddity. The variety of visuals and the lighting certainly make Cows a very pretty film to look at.

Earlier in the festival we described a movie as being what a country’s film board would nominate for Best Foreign Language Film at the Oscars. This time it could be argued that Alegria’s effort is the kind of movie that would play in strictly art house theatres. Perhaps a museum that features a multimedia wing. People can stop and wonder “Do the singing cows represent Magdalena or the other way around?” Or both. Or any other question people can come up with. And that’s perfectly fine. Fantasia lasts 3 weeks. Not every film is going to be a crowd pleaser. Not every film has to be one.