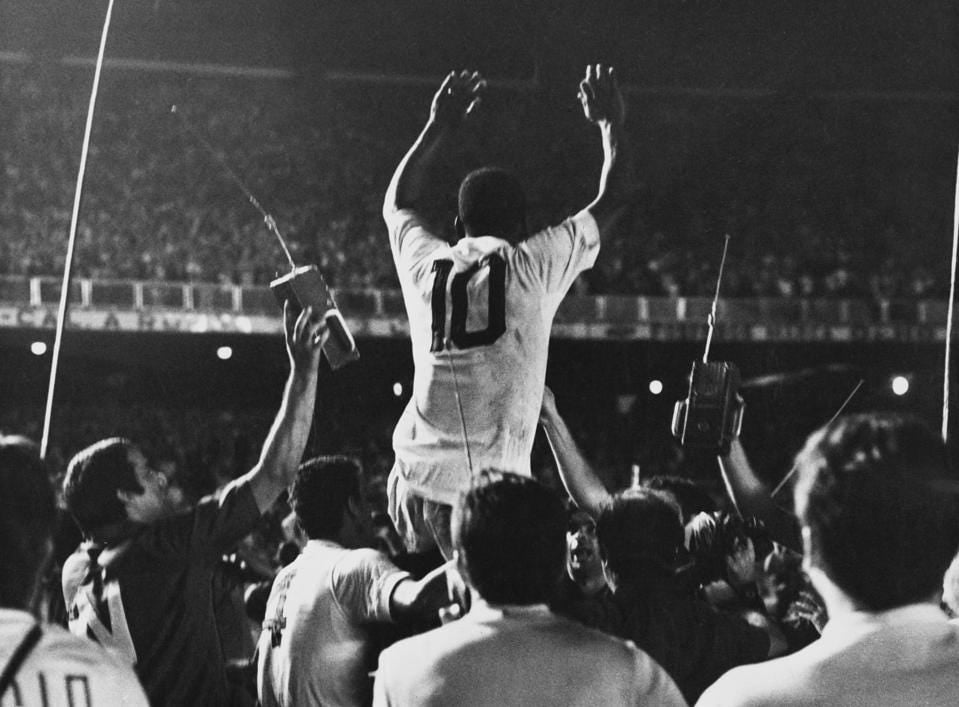 A Look Back at Pele’s Historic 1000th Goal

As the World Cup roars to life in Qatar, it’s worth remembering one of the absolute legends that helped bring what he often called “the beautiful game” to this point. On Nov. 19, 1969, Pele scored his 1,000th professional goal on a penalty kick against Vasco da Gama. Despite him being a player for the opposing Santos Football Club, a crowd of more than 80,000 people in Rio de Janeiro’s Marcana Stadium cheered the achievement. Many were in attendance to see the history unfold to begin with.

Vasco tried their best to keep history from happening against them, a defender even heading a ball past his own keeper to stop Pele from getting the goal. But a controversial penalty gave him the opportunity. He has since joked that in today’s environment, the penalty wouldn’t have been called. Edgardo “Gato” Andrada had postponed the celebration multiple times that day, including a spectacular save that saw him diving backward.

Andrada nearly stopped Pele on the 1,000th goal, correctly guessing the corner aimed for and heaving himself at the ball with everything he had left. But it found the back of the net and bedlam ensued. Pele found the ball, held it up, and kissed it repeatedly, emotionally thanking soccer for all the gifts it has given him. He later admitted that at 999 goals, he stopped shooting in a contest three days earlier so goal number 1,000 could come in an official game on a big stage.

From an early age, there was almost nothing Pele couldn’t do on the pitch. The striker possessed a prescient ability to know where his opponents or teammates would be, enabling him to make superstar plays or set up others as the situation demanded. He was able to strike with either foot, making defending against him a nightmare.

In 1958 at just 17, he led the Brazilian squad to the World Cup, the youngest player ever to win one. He scored two goals in the final against Sweden. It was the first of three, another feat no one else had achieved before, and finished with 12 goals in 14 career World Cup games. After the third win, Brazil was allowed to keep the Jules Rimet trophy permanently, a stipulation Rimet himself had put in place in 1930.

As a youngster his family couldn’t afford a soccer ball, so he used anything from grapefruits to socks stuffed with paper until he got his first real ball at six years old. The star never forgot his humble beginnings. After his 1,000th goal, he used this spotlight, as he did many others, to shine a light on the less fortunate.

“I don’t need a party to celebrate this,” he said after the milestone. “For me, it is much more important to help poor children and those in need, I’m thinking above all of the kind of Christmas they’re going to spend.”

Pele was the most popular and well-paid athlete of his time. After announcing his retirement in 1974, he was lured back with a lucrative offer to play for the New York Cosmos and help grow the game in the United States. He would retire again in 1977 after leading the Cosmos to the league championship. Though past his prime, he still brought a rock star quality, increased awareness of the sport and paved the way for other international legends to play in the United States. After Pele arrived in America, stars such as George Best, Eusebio, and Gordon Banks played in the North American Soccer League.

His larger-than-life celebrity routinely surpassed the game itself. On a 1967 trip to Nigeria, there was a 48-hour ceasefire of the nation’s civil war so people could watch the legend ply his craft. Yup, you read that right. They stopped a whole civil war for two straight days so everybody could watch this man play soccer. Calling him the GOAT doesn’t begin to describe it.

Among his honors were Athlete of the Century from French publication L’Equipe, the same award from the International Olympic Committee, and one of the 100 Most Important People of the 20th Century by Time Magazine. Since his retirement, he has continued to be an ambassador for the game and for the causes he holds dear. In June, he wrote an open letter to Russian President Vladmir Putin asking him to end the unjust invasion of Ukraine.

As an Afro-Brazilian, Pele was one of the first Black global superstars. Before the 1960s, any discussion of the world’s best players would be mostly White players. When Pele scored in the 1958 World Cup final, he was the first Black player to do so. He was the first Black man on the cover of Life Magazine, an honor unheard of in a country where racial segregation was still a way of life for millions of people.