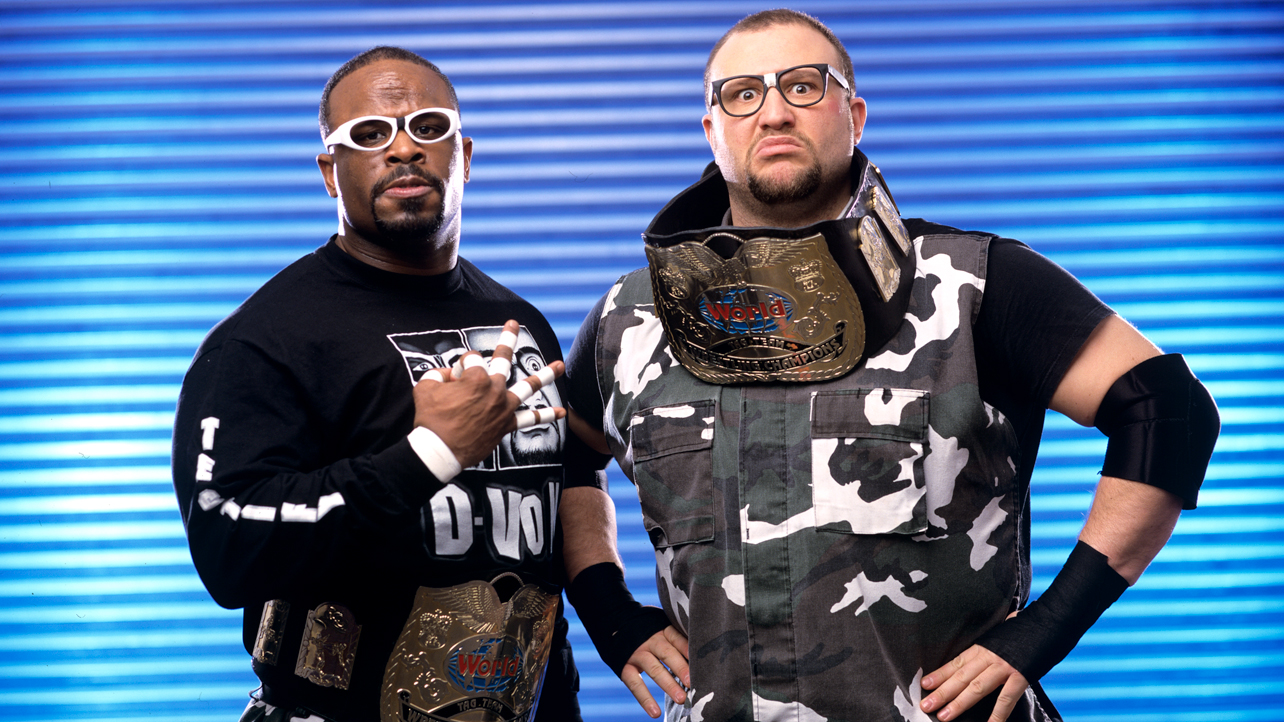 The Hardy Boyz vs. The Dudley Boyz

The 2000 edition of the Royal Rumble, which was held at the Madison Square Garden on January 23, is without a doubt one of the best WWE pay-per-views ever! It’s an absolute classic filled with memorable moments such as The Rock’s unforgettable Royal Rumble win and the street fight between Triple H and Cactus Jack. It also featured the first-ever Tag Team Championship Tables Match between two of the most significant tag teams a the time.

The WWF WWE has always had some truly amazing tag teams— from The British Bulldogs to The Rockers to The Rock ‘n’ Roll Express— but it was at the turn of the century that the tag team division really started heating up with competitors taking it to a whole new level in jaw-dropping hardcore matches, table matches, ladder matches and of course, TLC matches.

Leading this resurgence were The Hardy Boyz and the recent ECW defectors, The Dudley Boyz and at the 2000 Royal Rumble, the two teams would showcase their stuff in an unforgettable championship match that featured high-flying, no holds barred action.

It was the second match of the night and it was a match that would foreshadow the legendary TLC series between The Hardyz, The Dudleyz and fellow tag team competitors Edge and Christian. Taking the opportunity to impress a large pay-per-view audience, the two teams delivered a phenomenal showcase filled with several high-octane stunts and high-risk maneuvers.

In order to win the match, you had to put both members of the opposing team through a table. This meant that fans would be treated to seeing at least three tables smashed before the end of the match. However, these trailblazers wouldn’t settle for just three; by the time the bell rang, at least nine tables had been destroyed.

The match only lasted about twelve minutes, but it was an astonishing tag team match no less, and one filled with plenty of highlights including a mid-rope Powerbomb that sent Matt Hardy through a table. At one point, the Hardy Boyz gained the advantage with a double superplex to Bubba Ray and after a devastating chair hit across Bubba’s forehead, Matt and Jeff Hardy simultaneously performed a diving leg drop and a diving splash, sending their opponent through the table.

The match eventually carried onto the entrance as the Dudley Boyz stacked two tables on top of two other tables under a balcony. In a moment that would define what the tag team division would like over the next several years, Jeff Hardy dove off the balcony and delivered a Swanton Bomb to seal the victory.

There are many reasons why wrestling fans remember the Attitude Era as the peak period of the WWE. Not only did it have edgier, controversial storylines, often pushing the boundaries of what could be shown on national television, but the Attitude Era also featured a plethora of incredible performers, and yes, that includes many legendary tag teams. In the eyes of many wrestling fans, the Attitude Era featured the best tag team matches — and you’d be hard-pressed to find any other era in the WWE that had as much talent in the division.

The match between the Hardy Boyz and the Dudley Boyz at the Royal Rumble not only put both teams on the map, but it set up one of the greatest rivalries in the history of the WWE. It was the first-ever Tag Team Tables Match, and in my opinion, it is also one of the most underrated matches of the pay-per-view.