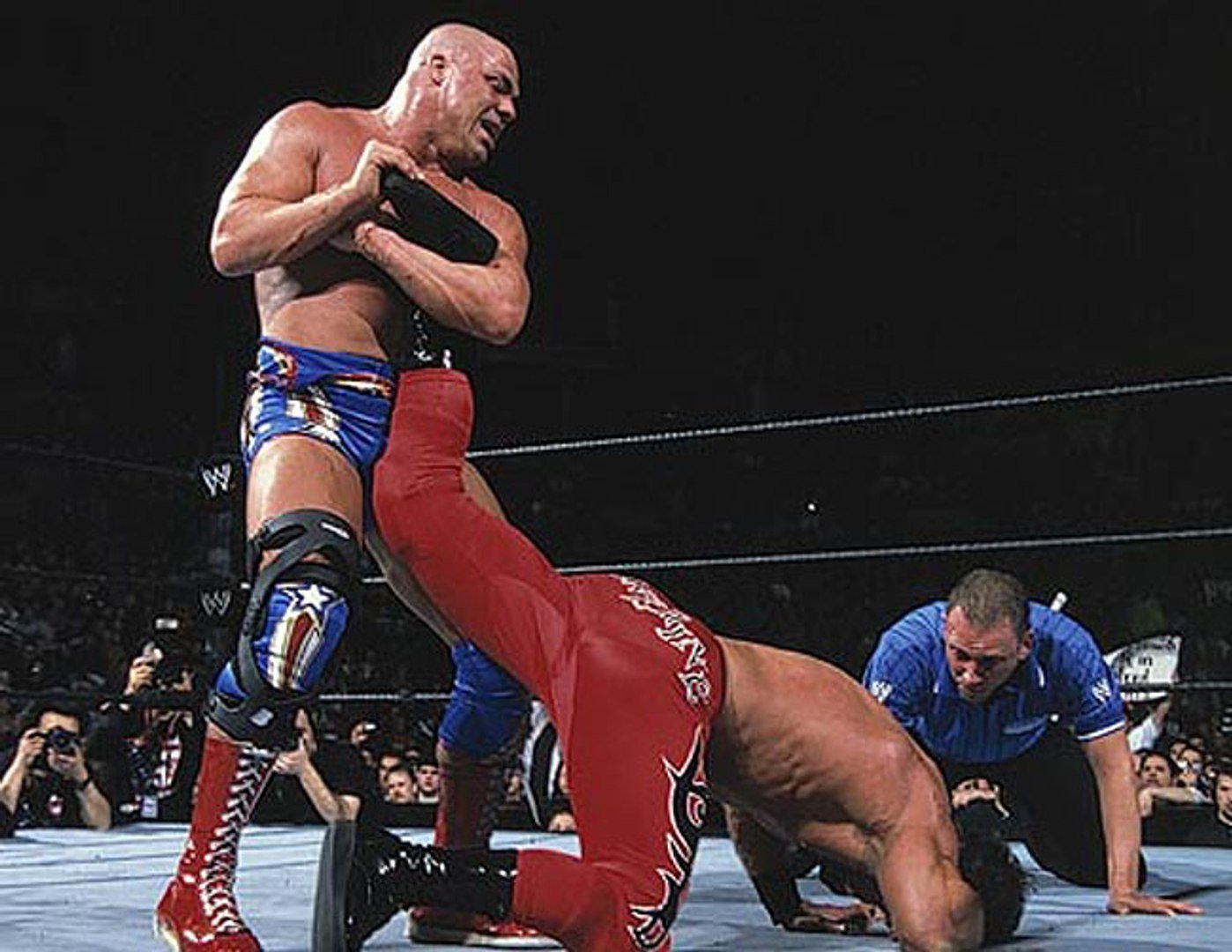 WWE’s annual Royal Rumble pay-per-view is famous for its over-the-top main event, but there have also been many legendary single and tag team matches over the years that wound up overshadowing the titular 30-man brawl. One such match came during the Ruthless Aggression Era when two of the greatest wrestlers in the history of professional wrestling, squared off in what would be a technical showcase between two mat technicians. Of course, I’m referring to the 2003 Royal Rumble WWE Championship match between Kurt Angle and the Rabid Wolverine, Chris Benoit.

The match between Benoit and Angle isn’t just one of the greatest matches in WWE history— it is hands-down, the best match of 2003— a non-stop classic that doesn’t get the full recognition it deserves.

This match took place on January 19, at the Fleet Center in Boston. It was the sixteenth annual Royal Rumble and it unfolded during the pinnacle of the first WWE brand split. Monday Night Raw placed a heavy emphasis on soap opera drama while Smackdown focused more on technical wrestling. And if this wasn’t evident at the time, it became crystal clear during the 2003 Royal Rumble pay-per-view. In short, there was a huge difference in quality between the Angle/Benoit match which headlined the Smackdown brand and the primary match for Raw which saw Triple H and Scott Steiner fight for the World Heavyweight Championship. It was no contest. The Smackdown brand came out on top thanks to the sheer talent of Benoit and Angle; two world-class competitors in their prime and arguably at the time, two of the best wrestlers on the planet.

For roughly twenty minutes the Canadian Wolverine and the U.S. Olympic Gold Medalist went to war in a non-stop physical encounter which simmered with an amazing series of transitions from the Ankle lock to the Crippler Crossface. Needless to say, both men pulled off every single one of their special movies, multiple times throughout the match. Benoit attempted a diving headbutt on Angle, only Angle avoided the move and attempted an Angle Slam on Benoit which Benoit countered. Later when Benoit applied the sharpshooter on Angle, Angle in dramatic fashion, slowly made his way to the edge of the ring and touched the ropes to break the submission. Their chemistry was off the charts and the action in the ring kept the audience at the edge of their seats, as did the incredibly convincing near-falls which were executed to perfection. At one point, both men lay on the mat unable to get to their feet which almost resulted in a double count-out. It was a back and forth battle that had spectators believing anyone could win at any given moment.

WWE had built Benoit up as a babyface, and despite being the underdog— with the crowd behind the Canadian wolverine, many believed he would finally hold the belt over his shoulders. By the time Benoit executed a diving headbutt, nobody in the arena was left sitting on their chairs. In the end, however, Benoit applied yet another Crippler Crossface on Angle, only to have Angle counter it into a modified ankle lock, forcing Benoit to submit to the hold. It was a clean finish that featured a rare submission from the famously resilient Benoit.

The match exceeded any expectations and in the end, both men received a standing ovation. And while Benoit didn’t win, he walked away as the man who stole the show. Thankfully, it wasn’t the end for him but only the beginning. Over the course of the next year, he would rise in the ranks of the WWE roster and in 2004, he would win the WWE Championship at WrestleMania XX against Shawn Michaels and Triple H in a triple threat match.

As Kurt Angle said when asked about his career-defining match: If you want to learn and understand the art of pro wrestling, you need to watch the 2003 Royal Rumble World Championship match.

Up next….. Royal Rumble in January 2019. 16 years ago I had the privilege of defending my WWE Championship at the Royal Rumble. This is how the match was explained verbally to those who haven’t watched it. “Professional wrestling in its purest form is as beautiful as ballet, as elegant as a ballroom dance and as captivating as a theater. By purest form I mean technical wrestling, which in today’s world is almost non-existent. The fiery chain wrestling, involving great chemistry, in-ring psychology and dream like story telling is something that happens when all the stars align.” This match was one of my best performances of my career. If you haven’t seen it, give it a look. #itstrue #wwe #championship #royalrumble

Angle vs. Benoit can be viewed as the single greatest non-Rumble match in the history of the pay per view. Watching it again after all these years proved to be just as thrilling— even if I already knew the outcome.