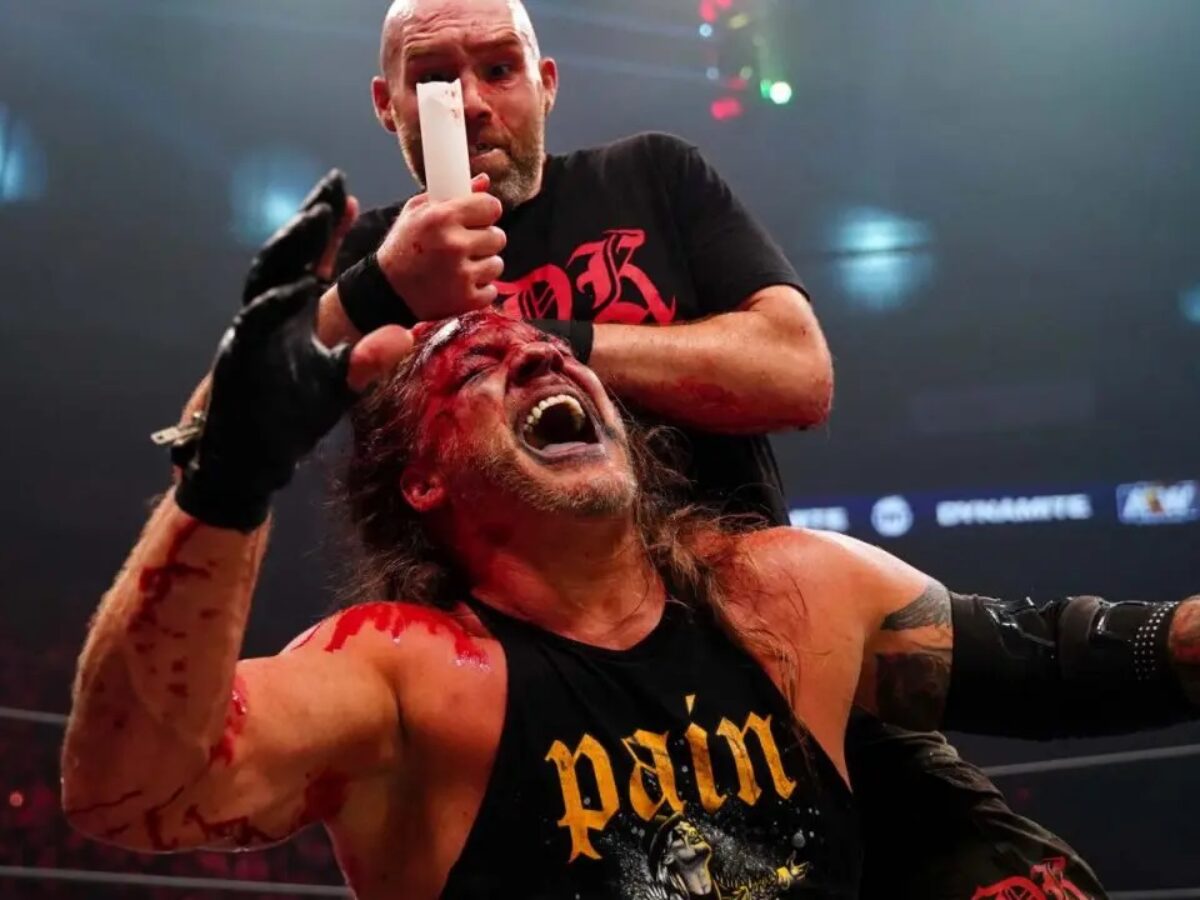 With the arrival of Nick Gage in AEW during the recent Fyter Fest Night 2 -21st of July, 2021- it solidifies an already burgeoning idea. That being, AEW are fully embracing the world of hardcore wrestling. “MDK All Day” indeed.

Looking back to the days of Moxley’s weapon-filled bouts against the likes of Omega and Joey Janella in 2019, AEW have always toyed with the deathmatch concept. Blood has featured throughout AEW’s tenure of course, but the full-on deathmatch has always been kept as a relative rarity. Now though, things may be changing. The local hardware store isn’t going to know what hit it.

AEW’s Dalliances With The Deathmatch

AEW has always tried to be a mix of everything. While bloody violence may not be everybody’s proverbial cup of tea, you can’t deny there’s something enticing about it. Something that stops you from looking away. AEW’s own brand of the deathmatch falls somewhere in the middle. It’s not quite a GCW or those old Japanese videos you occasionally find that border on a snuff film, nor is it the tame PG version you’ll find in WWE.

It’s why it was so surprising when Omega and Moxley fought in an Unsanctioned Match back in 2019 when weapons like glass and barbed wire got involved. It was even more surprising when AEW held their first Barbed Wire Deathmatch earlier this year -the same participants again, there seems to be a theme here. Take these instances aside and AEW’s hardcore output usually stopped with Darby Allin jumping off something silly or using a skateboard with thumbtacks on it.

As mentioned, the Barbed Wire Deathmatch happened in March of 2021. While it wasn’t as violent as their previous clash, the reputation of the stipulation was statement enough. Just as long as we forget about the limp finish.

It’s not like AEW are against weapons, but there’s a special kind of weapon that comes out when Deathmatch season comes a-callin’. That being thumbtacks usually. Though there’s one weapon, in particular, one brought to AEW by Nick Gage himself, and it may signal a new era in AEW Deathmatches. That’s right, I’m talking about the pizza cutter. It may not seem like much at first, but if this means that Nick Gage is bringing his own brand of violence to AEW then who knows where it may go from here.

Let’s first look at the upcoming Nick Gage vs Chris Jericho match as part of the Labours of Jericho. There are two very interesting questions going into this one.

How far will Chris Jericho go? Think about it. Jericho isn’t a Deathmatch wrestler. He never really has been. Arguably the closest he’s come to it is that infamously terrible Ambrose Asylum match in WWE against the long-lost alter ego of Jon Moxley -hello again, Jon. It wasn’t good, but he did take a thumbtack spot so who can really complain? It’ll be fascinating to see how far he goes when put up against the king of violence.

How far will Nick Gage go? The pizza cutter is just an indication as to the MO of one Nick Gage. Between life in and outside of the ring, there’s a reason that there was a Dark Side of the Ring episode about him. With a TV network to keep happy, you’ve got to wonder how much AEW and TNT are going to greenlight.

You’ve got to think AEW have been given some leeway going forward with deathmatches. Maybe it’s part of the deal to keep a show on TNT when they move channels next year? After all, advertisers usually aren’t keen on this kind of thing. They prefer John Cena and wholesome comedy.

So does this mean Nick Gage is ‘All Elite’? Probably not. This is likely a one-off to set up a working relationship with GCW like they have with NJPW and Impact. Regardless, it may be an indication that AEW are gearing up to give us some more deathmatches. Are you ready for a bit of the old ultraviolence?

AEW and the Return of Wrestling’s Managers