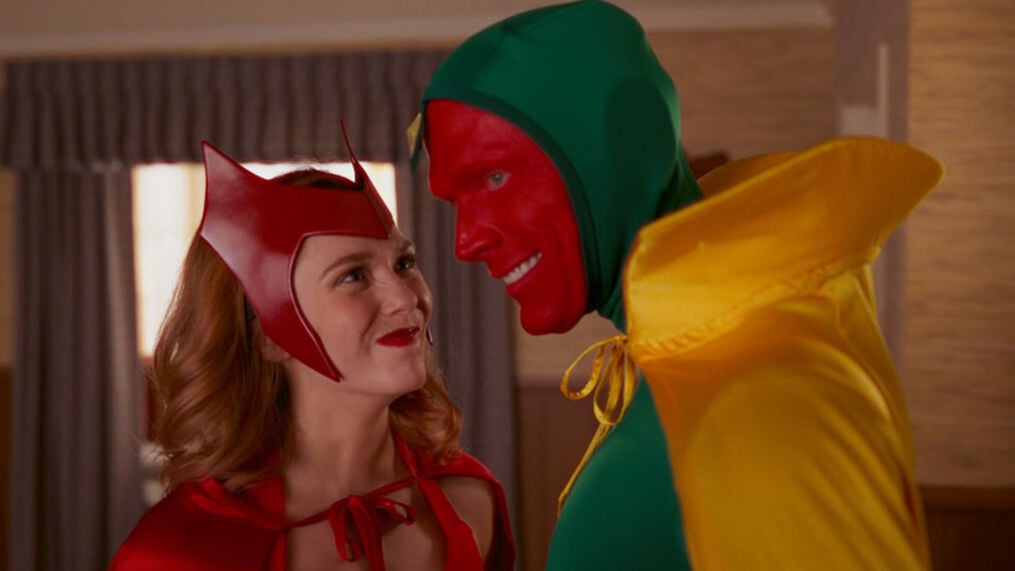 Like WandaVision itself, “All-New Halloween Spooktacular!” is trying to be many, many things simultaneously – and as such, struggles in its position as a turning point for the season as a whole. As Vision wanders around trying to find reality, and Wanda tries to hold her very precarious world together, WandaVision itself is beginning to feel split between its premise and its endgame (sorry), mirroring its own identity crisis as a TV show stuck between enormous chapters of Disney’s signature franchise.

“All-New Halloween Spooktacular!” is one of the more interesting episodes of the series, a half-hour existing on the edges of Wanda’s sanity, teasing out what’s real (and what might not be) with Wanda’s resurrection of Vision, and quasi-resurrection of Pietro (“quasi” given the disturbing image of Zombie Quicksilver during their pivotal conversation together, and whatever those implications may be). Unfortunately, the episode’s standout scenes are tucked in between a nebulous homage to late 90’s/early 2000’s family comedies, none of which bubble to the surface in meaningful ways (like in episode two, where the magic show served an apt metaphor for the illusion of reality Wanda had created).

(Also, the theme song is terrible – respect to anyone who tries to imitate Malcolm in the Middle, but I have no idea what that opening song is trying to accomplish.)

The “holiday special” episode also doesn’t really hold any weight here: as the MCU inevitably pulls WandaVision into its gaping maw of future content, the less and less the show seems interested in the grounded conflict between Wanda and Vision (and, as I mentioned in previous episodes, feels like the old Marvel trick of using female trauma as fuel for plot development). The holiday concept just exists so we can get the neat little trick of everyone in traditional Marvel costumes; when it comes to embodying the true “family member guest star holiday episode”, WandaVision misses what the greats (like Fresh Off the Boat, to name one recent example) understand about those episodes, and the opportunity for an outside presence to act as a conduit for examining the very foundation of its main characters and setting – here, Pietro basically just shrugs his shoulders and says “damn girl, you all powerful and shit”.

It does feint at more, with Pietro having an unnaturally apt understanding of Wanda’s current situation and mental state; but ostensibly, “Spooktacular!” is more interested in what’s going on with Vision. And instead of leaning on family (for the most part, Vision is isolated in this episode), Vision leans on the world around him, and begins to see the cracks forming on the surface. Around Westview, Wanda’s influence is beginning to wane a little; like an open-world action game, she’s left a lot of her created world running on automated scripts, going through the motions so she can concentrate her energy on more pressing matters – like her fake children, or the massive expansion of her created reality at the episode’s conclusion, turning SWORD agents into clowns (and sucking Darcy into the world along with it).

Of course, the cracks in reality begin to spiderweb once Vision sees the pain Wanda’s putting everyone in; the disturbing image of a woman crying while repeating the same motion over and over is all we need to understand the terror of having one’s mind taken away from them – and, as a proxy, to begin to understand the dread Vision himself is feeling, as he begins to realize he’s dead, and Wanda might just be losing her grip on her sanity (helped along by a briefly conscious Agnes, whose strange, foreboding presence has continued to build in some much-needed tension in Westview… clearly, she’s a witch, and has something to do with what’s going on here, even if she’s not in control anymore).

What’s interesting is how this conflict manifests for Vision – or more specifically, how quickly: it’s only been about an episode since Vision became a little more… cognizant to what’s going on around them, and “All-New Halloween Spooktacular!” pushes him even farther down that road, isolating him and forcing him to confront the pain his wife is causing with her created reality. Strangely, this only emits anger and despair from Vision, who desperately tries to escape the WandaBubble, only to start dying again as he breaks through her intensely powerful force field around the town.

It’s an intriguing metaphor, to think about spouses trying to penetrate a partner’s depression: not always are our partners so willing to open up, to expose the pieces of themselves that are hurting and broken. Forcing oneself through those barriers, of course, can be more destructive than helpful: so it’s no surprise an angered Wanda expands her WandaSphere exponentially in the closing moments: a reminder of what she stands to lose with Vision, her children, and her reimagined brother, drives Wanda deeper into her trauma, burrowing herself deeper and deeper within her powers, to a place maybe even Vision’s unwavering logic can’t reach.

WandaVision continues to display this creative dichotomy that is both intoxicating and annoying: this episode, like many others, brushes up against some really poignant moments of character and theme, perhaps the best example since the show’s fabulous second episode. But as always, the MCU lurks in the corners of WandaVision, always holding the show back from fully committing to the premise of the series: you can almost feel the writers tethering the events of Westview to the rest of the universe, refusing to budge an inch and give the series some slack in connecting itself to the larger picture.

Given where this episode ends (and considering there are only three episodes left), WandaVision is about to leave its sitcom hijinks behind (save for what appears to be a Modern Family homage… you know, since we all know who owns ABC), which raises a lot of questions about what will be left? The rising tensions and constant winks towards something else going on means we’re in store for some third-act narrative tomfoolery: without the unsettling world of Sitcom Histories as a backdrop, how will these moments land?

Rather than speculate, I’ll just hope that the expansion of Wanda’s hex means we’ll spend less time outside (in the “real world” of the MCU), and devote these last 90 or so minutes to really hone down on Wanda’s emotional journey from the end of Infinity War until now (lest we forget, she was one of the Snap victims at the end of that film, and goes unmentioned until she randomly appears at the big CGI climax of Endgame).

For now? Hey, at least someone finally referenced Wanda’s goddamn accent – and the more Evan Peters is allowed to hang around, the more fun the concluding moments of WandaVision will inevitably be, as it careens towards its climax, and its unfortunate, yet inevitable integration back into the boring, bound-to-underwhelm world of SWORD, the Avengers, and the entire Marvel Cinematic Universe. Ultimately, that final minute feels representative of WandaVision as a whole, continuing to expand its characters and mystery as a trick to keep a grip on everything – which, as we can probably predict for Scarlet Witch, is not exactly a formula for success. Fingers crossed it all pays off.