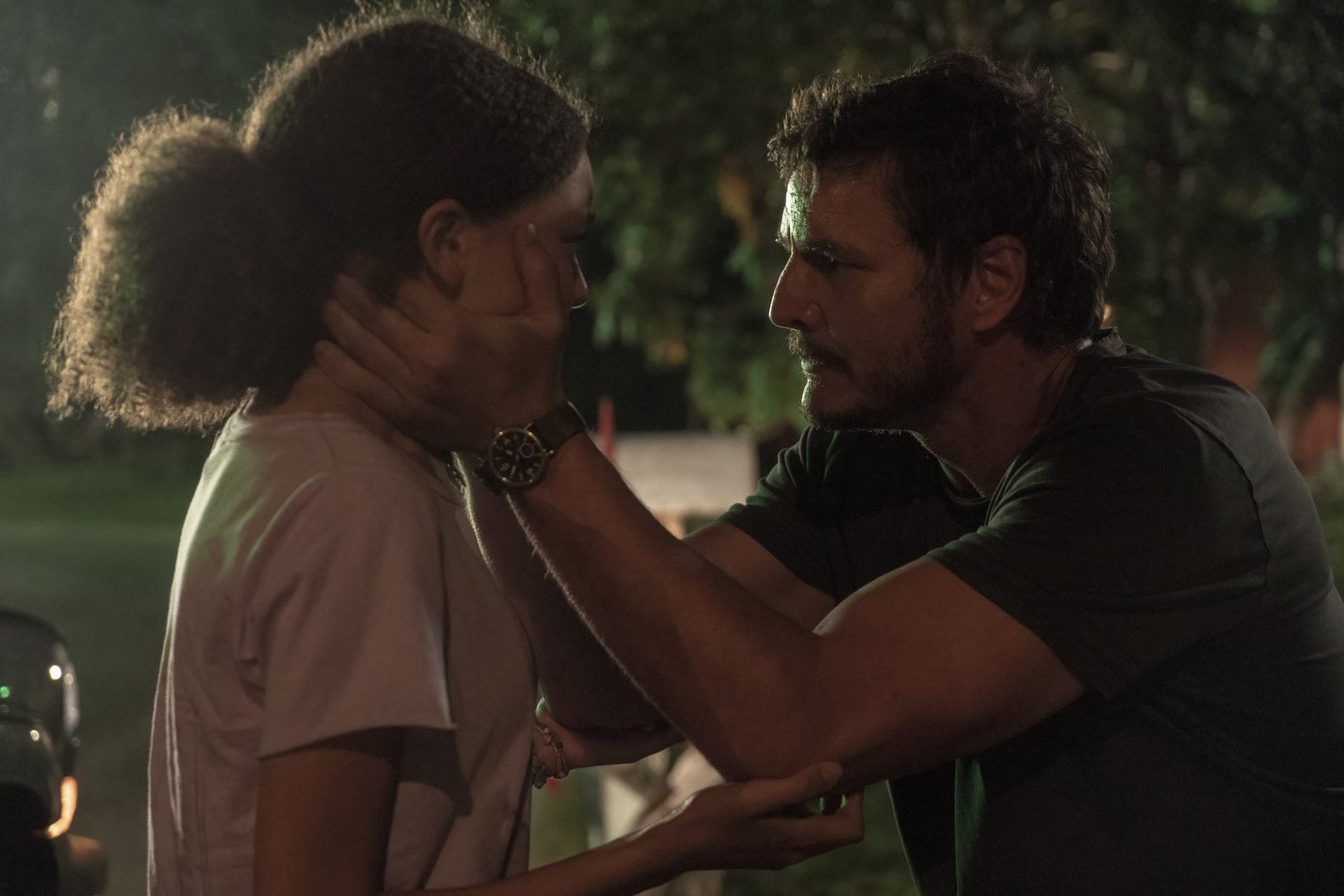 The Last of Us Season One, Episode 1
“When You’re Lost in the Darkness” Review

The Last of Us may be the most unsurprising video game adaptation ever; after all, the 2013 PS3 title explicitly tries to not be a video game for much of its running time, one of many modern attempts to blur the lines between popular mediums – in what now, in 2023, feels like predictable ways. A conflicted protagonist, a bleak, well-realized world – and of course, oodles and oodles of aesthetic style unseen in video games at the time, accentuated by jump cuts and Gustavo Santaolalla’s infectious, emotional score. Its cinematic qualities were often at its odds of being a video game, though; watching The Last of Us was often more fun than playing The Last of Us, a cover shooter with some nifty crafting mechanics and some clumsy combat.

They always felt like two separate entities; The Last of Us, the game, where Joel can see outlines of people through walls and can craft items while running around in circles, and The Last of Us, the script that so nakedly wanted to be anything but a video game, full of conflicted morals, richly defined characters, and a bleakness that other zombie-adjacent media of time could only hope to aspire to (let me spell it out: every scene and plot twist in The Last of Us is Negan with the baseball bat, in a way). It wanted to be something – and for that, it was lauded in ways that were both deserved and wildly overblown.

Those cinematic aspirations made it pretty obvious an adaptation was an inevitability; and nearly a decade later, The Last of Us has arrived, in all its tribalistic, dour post-apocalyptic glory. That inevitability is almost formal in how straightforward it is; “When You’re Lost in the Darkness” is a beat for beat recreation of the opening hours of the game – in what sometimes feels like a collection of screenshots brought to life. To call it safe would be an understatement; but given how familiar the structure of the source material’s opening hours, it’s not a complete surprise the series isn’t taking any big, new swings in its debut.

Of course, since it is a prestige zombie-adjacent story, The Last of Us must begin in the Before Times, where we are introduced to Joel (Pedro Pascal, grunting his way through a solid American accent) and his daughter Sarah (Nico Parker), on the day the world fell victim to a brain-infecting fungus. 2003 Joel is hard working (to a fault), a loving father clearly keeping depression at bay by keeping his hands constantly busy, being a single father to a daughter already more mature than him.

From the beginning of Joel’s ill-fated 36th birthday to the episode’s unremarkable closing shot 20 years (or 90 minutes) later, The Last of Us is almost aggressively competent, both in its application of familiar genre tropes and its (sometimes annoying) imitation of the game’s now-iconic opening scenes. Joel’s watch, Sarah’s innocence, Tommy’s frantic driving around town when things go to shit… it’s all there, delivered by director Craig Mazin (in a script from him and OG writer Neil Druckmann) in a decidedly straightforward fashion – in fact, the only thing missing is the semi-constant ping of trophies and death screens when I walk into the goddamn flashlight beam for the 14th time in a row.

And where it lacks in visual panache, it makes up in familiar imagery (for better or worse); the feeble old lady empowered by a virus, the sight of someone chewing off another’s face, panicked handheld shots forcing the perspective of its protagonists (here in the form of some very blurry, shaky scenes inside Tommy’s truck)… every ounce of The Last of Us‘s imagery and ideas are played safe and close to the chest – which, for someone who knows where this story heads, is a bit disappointing.

If you couldn’t tell by the dead daughter or the subplot around people dying over a useless car battery, The Last of Us prescribes to The Walking Dead‘s “humanity will always be the worst version of itself” with its characters and setting – which, if they adhere to it through the events of the two games, is going to lead to a lot of potentially alienating, emotionally draining moments. The Last of Us is a cascade of tragedy and anger, a cacophony of bitterness and regret, all filtered through Joel’s utterly broken worldview (which… whoo boy, we will have plenty of time to unpack that poor man’s psyche in the coming weeks). Save for the occasional joke offered through gritted teeth, The Last of Us is subtly relentless in its introduction to 2023 Boston, where Joel the Pill Pusher solemnly drinks and his gruff, bruised partner Tess (Anna Torv) walks around talking shit in a way only people who’ve survived unspeakable things can do.

Of course, Ellie (Bella Ramsey), is the character at the epicenter of The Last of Us‘s story (and mystery), and it takes a bit of a winding path to get Ellie and Joel in the same room. And “When You’re Lost in the Darkness” has so much story to stuff in before it can bring the two together, it’s hard for the pilot to give a good sense of who Ellie is beyond “angsty teen who has a knife” in her few opening scenes.

This is by design, of course – the pilot roughly covers the first two hours of the game, where Ellie barely factors in and Joel is mostly focused on finding Tommy (Gabriel Luna). But in the interest of mystery, “When You’re Lost in the Darkness” betrays the simplicity of the narrative and its moral ethos a bit, in a way that the game (with its interspersed gameplay sections – and by nature of players controlling characters, a sense of authorial control), could often cover up a bit more.

The rough sketch offered for Ellie is mirrored by Sarah’s presence, who is meant to be the emotional bridge between audience and Joel as we are re-introduced to him twenty years later; but Sarah’s 15 on-screen minutes feel like nothing but a (well-acted and delivered) preamble, a nakedly brief, violent reminder that nobody in this world gets a happy ending, or even the chance to remotely enjoy the hours when the sun is down. The Last of Us, for all its praise, is not a subtle story; without developing some dimensionality to the straightforward regurgitation of these stories in the pilot, The Last of Us‘s first hour certainly raises questions if its emotional and narrative stake will translate neatly to film.

Early pacing issues and general lack of originality aside, “When You’re Lost in Darkness” is a proficient introduction to the world of Fireflies, QZ’s, and sad pill-peddlers taking ill-advised cross-country trips. As a high-profile premiere on a prestige network, The Last of Us’s flashy, bleak pilot is exactly what you’d expect it to be; but that checklist-like approach to storytelling and worldbuilding is why I’m anxious about whether it will try to distinguish itself from its source material.

It would be wrong to project what The Last of Us could be – what “When You’re Lost in Darkness” is still a solid pilot, 80-something minutes of effectively portraying a world that’s descended into absolute nihilistic nothingness, the ugliness of humanity represented by the dilapidated, broken down society slowly being reclaimed by nature. However, in that translation from pre-rendered polygons to live images, The Last of Us‘s hollow, one-dimensional sense of humanity is unfortunately preserved – which, like its protagonist, is unrelenting in its willingness to be bleak and detached, to bury its humanity in the pursuit of some self-righteous sense of purpose or survival.

There’s still plenty of time for The Last of Us to develop its own sense of identity and use the source material as a launching pad rather than a strict blueprint – “When You’re Lost in the Darkness” doesn’t attempt to do so, and as a result, feels a bit more rigid and attached to its original sensibilities. Freed from the technological and narrative boundaries of a video game made a decade prior, that safety makes for a bit of an underwhelming start – and could make for a really divisive season of television, should it remain such an inflexible adaptation.

Symbols of Time in The Last of Us Pilot Episode