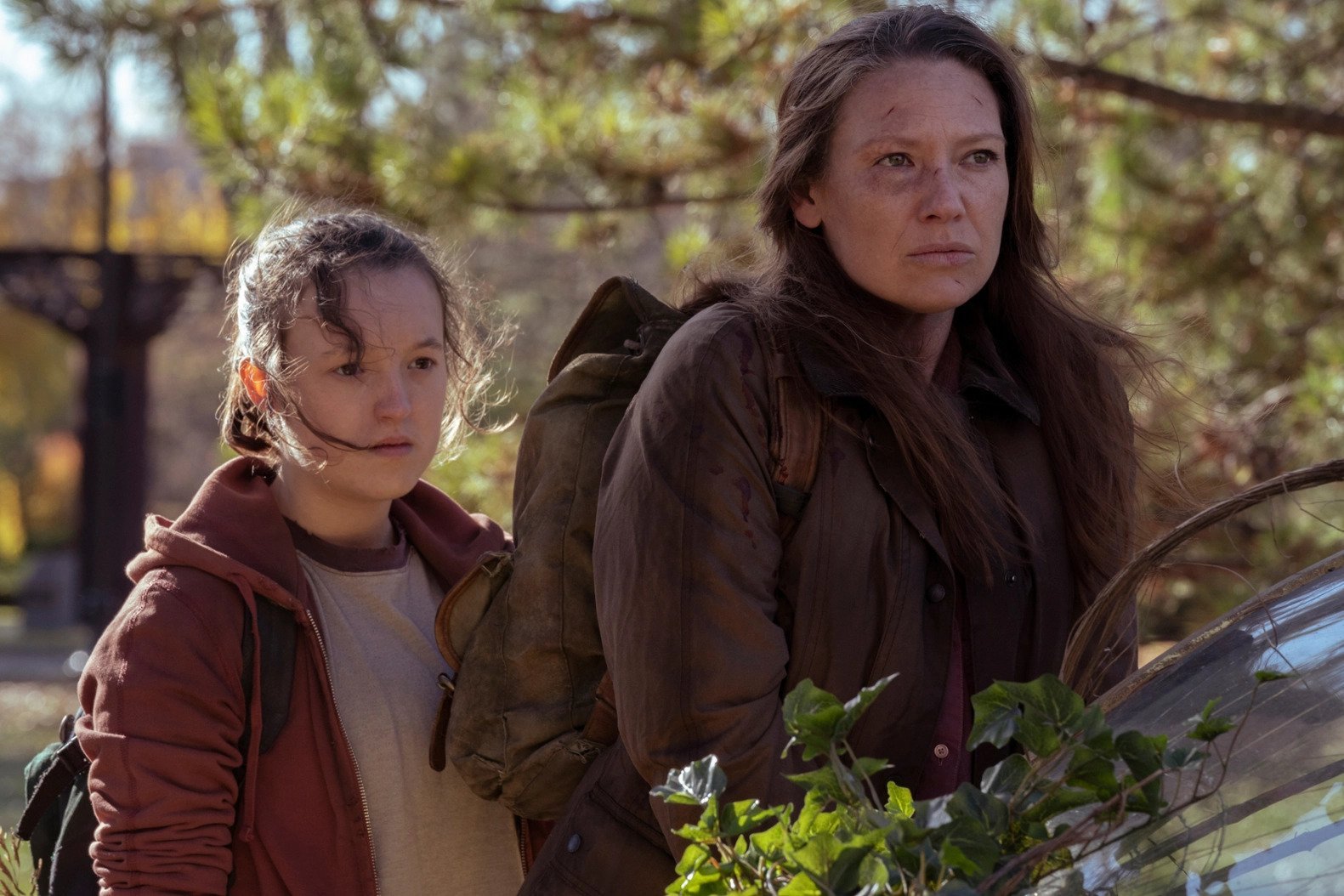 The Last of Us, Season One, Episode 2:
“Infected” Review

There’s a moment early in “Infected,” The Last of Us‘ laborious second episode, where Tess, Joel, and Ellie open a dilapidated door and let their eyes adjust to the sunlight. If, for a moment, a dying world is at peace, a fitting metaphor for a trio of people clinging onto anything not sliding into the shadows – or even more troubling, reemerging from the darkness a screaming, ravenous mushroom head. But what seems like a passing observational moment is really a harkening for the very pathos at the heart of the series: The Last of Us is a decidedly unhappy franchise (even for a zombie story – it has terrible storytelling, but at least people get laid in The Walking Dead), one that revels in its ability to depress its audience at every possible turn, something “Infected” puts on full display – for better or worse.

A more obvious way to perceive The Last of Us‘s second episode is to observe it from the point of view of poor Tess. Though a woman who clearly is willing to do what she needs to do for survival – I mean, what character says “I’m not a good person” out loud and lies about it? – a part of Tess clings onto the hope that may the last twenty years have been a nightmare, one that’s on the verge of ending. She may not say it but she believes in people; she believed in the battery smuggler in the pilot, she believes in Joel somewhere in the past, and she believes in Marlene’s mission to transport Ellie west after she sees with her own eyes the teenage girl’s immunity. While Joel looks for the world to let him down, a tiny piece of Tess still looks to the sunlight to bask in what’s left of the world’s sense of shared purpose – and maybe, for her own hopes to build out a peaceful life, where she no longer has to commit horrific acts for ration papers.

To its credit, “Infected” does a fantastic job funneling that optimism through Tess – and Anna Torv’s understated performance is beautifully delivered, pushing down that sense of hope and optimism creeping in, only letting it out into the world when she knows it is completely useless, and can no longer be jinxed by being stated aloud. Tess’s role in this episode is phenomenal; it helps accentuate the moments in between this episode’s long stretches of Walking Simulator 3000 (which, as it continues to imitate much of the video game’s narrative rhythms, just reminds us that these scenes were created during a very different era of single-player gaming). More importantly, it allows Tess a bit of agency to impact the story’s emotional arc a bit – which to this point, has been drenched in Joel’s unrelenting, depressing nihilism (though, you know, can’t really blame the guy).

“Infected” offers a number of mutations on its original source material – setting scenes in Indonesia, changing the delivery and function of the Crydoceps fungus to be more threatening – but what it doesn’t change in the slightest is how much it wants to revel in its own misery. Sure, there are a couple of sarcastic asides thrown in here and there for levity, but every moment of hope in The Last of Us is brutally punished in what becomes a repetitive series of reminders of how in this world, everybody loses except nature.

That’s not an inherently bad story to tell, of course – “Infected” gets a lot of effective mileage building out the clicker mythology, which makes their appearances properly frightening when they do occur. But it does make the pieces of the puzzle very easy to put together; the minute Tess’s eyes soften towards Ellie, and she gets invested in bringing her to safety, one can almost feel the plot rug being pulled out from underneath her. In its second episode, The Last of Us wants to remind us of one very specific thing: just because you’re a good or bad person has nothing to do with it – bad shit happens to everyone constantly, and only the most resilient can find their weary existence in the world to face the next dice roll of survival.

“Infected” makes no qualms about that being its story – and does absolutely nothing to try and quell that sense of despair in a way that makes the episode feel even bleaker than the pilot (which is tough to do when you drop the Dead Daughter in the first hour). I mean fuck, Tess can’t even die in peace for her sacrifice – in one of the more disturbing changes from the book, she dies by being gently tongue-banged by a clicker as she tries to flick her lighter for the last time… which is just a really weird way to kill off a female character?

I’m of two minds with the big climactic moment of “Infected”; after an hour of slowly walking down dark, mushroom-laden hallways, I certainly welcomed the dramatic crescendo, and the speed with which the final scene came about. And I really like how unsettling the image is; nature does not take back her world gently, but to see it get almost sexual with a human woman was…. well, it was unsettling in a “tentacle porn” adjacent way, in how Tess’s last conscious experience was being orally violated by a vegan zombie. It’s one of those “would they have done that with a dude character?” moments that happens a thousand times in dramatic material – doesn’t make it terrible, but it certainly made for the episode’s most eyebrow-raising moment, especially as it reinforces the theme that Tess, with her high and mighty bullshit putting her faith in another human being for a half second, is doomed to be punished by the mycelium gods for her optimism.

It also doesn’t help that so much of “Infected” feels directly lifted from a video game, from its less-than-subtle thematic work to its repetitive construction: our three characters walk into a space, discover something that lets them talk about world-building, weird/scary things happen, we go outside. The episode’s repetition of moving from a hallway to an open space to another hallway is a show once again mimicking its source material – which I suppose is to be expected, given it was game co-director Neil Druckmann’s first directing credit, to see this episode borrow heavily from its own imagery and pacing.

Smartly, those scenes are still used to build world and character – but it doesn’t make it any less dramatically inert to watch the three of them walk down a hallway, stop when they make some noise, move again, repeat until outside the building. But hey – this is a game that insists on repeating so much of its original’s visual panache (right down to the way it cuts between scenes and/or to credits), that it would adhere so closely to the structure of its source material. At least it looks real nice; HBO is putting its money where its mouth is, which gives depth and scope to the show’s world the games could never recapture.

Entertaining, effective, enlightening… all words that accurately describe the experience of watching “Infected,” but there are so many moments that lay bare the show’s maddeningly two-dimensional sense of storytelling (for example: we learn that all the cities in the world were bombed because it was the first idea an Indonesian scientist mumbled after seeing not-patient zero… cause and effect, baby!). It’s a series so focused and driven it becomes a fault: The Last of Us‘s second episode suffers from a serious case of emotional and narrative tunnel vision, a byproduct of its source material and how that rigid structure is being forced into a new medium.

The result is something cold and more brutalist than even I expected; certainly building blocks to make a phenomenal series with, I just wish these first two episodes grappled with the bigger ideas and emotions it presented with some nuance – or at the very least, some sense of cosmic balance. Even the most depressing stories have their bright moments; as long as The Last of Us squints at the sun and runs towards the darkness, it will be painted with a limited, basic emotional palette, broad strokes, and flat colors that make for well-designed, thoughtful, and utterly soulless television, one place I really hope the show will diverge from the series as it continues.

Symbols of Time in The Last of Us Pilot Episode