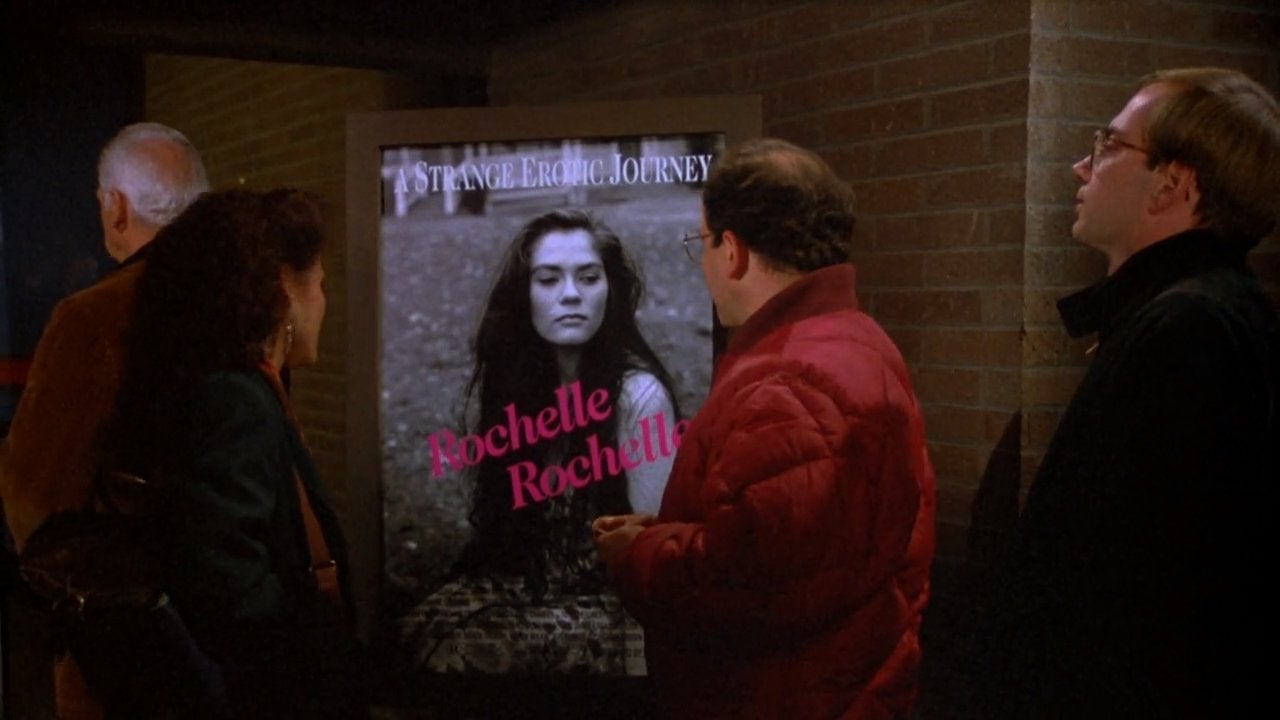 Fictional Movies from Seinfeld, Ranked by How Good They Would Likely Be

Seinfeld finally lands on its new streaming home of Netflix on October 1. One of the underrated great things about the “Show About Nothing” was the way it came up with fictitious movies, which were the occasions of group outings, piracy schemes, and other adventures of Jerry, George, Elaine, and Kramer. Several of these movies are from the episode in which Kramer takes over the phone number of Moviefone; younger binge-watchers will likely end up confused as to what the hell Moviefone even is.

Sure, occasionally Seinfeld plots incorporated real-life films, like The English Patient, and Schindler’s List, and the time they got held up at a Chinese restaurant while going to see Plan 9 From Outer Space. There was also that weird run in the eighth season in which the show did a bunch of movie parodies in a row. But here’s a look at the best fake movies on Seinfeld, based on how good they would be if they were real.

Death Blow, featured in the episode “The Little Kicks,” appears to be a gimmicky, high-concept action-adventure movie, almost certainly produced by Don Simpson and Jerry Bruckheimer, and directed either by Tony Scott or Michael Bay. Its tagline, “When someone tries to blow you up, not because of who you are, but because of different reasons altogether!,” indicates that Death Blow likely fits in the Simpson/Bruckheimer filmography somewhere between The Rock and Con Air.

We never find out the title or anything else about it, but in the season 3 episode “The Alternate Side,” Kramer films a cameo in a movie Woody Allen is filming down the street, with just one line: “These pretzels are making me thirsty.” Knowing that Allen was doing particularly interesting work in the early ’90s, I’m guessing that film would have been at least decent.

Prognosis Negative was an old dark comedy screenplay of Larry David’s, and its plot — a man won’t commit to dating a woman until he finds out she’s dying— sounds more like something that would happen on a Curb Your Enthusiasm episode than anything in a real-life movie. David would base a Curb arc, about Larry not being able to dump Vivica A. Fox because she has cancer, on the opposite scenario.

Chunnel is an action thriller, which the characters go to see in the Season 7 episode “The Pool Guy.” The plot seems to be a group of characters, one of whom is the president’s daughter, trapped in the Channel Tunnel between England and France, setting off an international crisis. This sounds like more of a minor ’90s action film; a similar film with Sylvester Stallone, Daylight, would come out a year later, in 1996, albeit set in the Lincoln Tunnel rather than the Chunnel.

A chess-themed movie which the characters plan to see before they end up at Rochelle Rochelle instead. Checkmate indicates that Seinfeld had the idea for a compelling fictional narrative about chess two decades before Netflix came out with The Queen’s Gambit.

Another action movie, which is mentioned in dialogue. We know that it stars Harrison Ford and that he jumps out of a plane. In 1998, a real movie called Firestorm was later made, the lone starring role of NFL star-turned-studio host Howie Long, but I’m guessing the fictitious Ford version probably had a higher budget.

A drama about Juan Ponce de León’s search for the fountain of youth, and one where it’s kind of a surprise there hasn’t ever been a real movie. I would see this if they could get, say, Antonio Banderas to play the title role.

9. The Pain and the Yearning/Cry, Cry Again (tie)

These movies are both the kind of thing that Merchant and Ivory would have made, starring Anthony Hopkins, and tying for the lead in Oscar nominations in 1993 or 1994. Cry, Cry Again is best remembered for the scene near the end in which, as Jerry says, “out of nowhere there’s this lone dancer who appears to be injured.”

This one shows up in the episode that was built around Elaine’s visceral hatred of the 1996 Best Picture Oscar winner The English Patient, in which Ms. Benes decides instead to go see Sack Lunch, a dumb, Honey I Shrunk the Kids-like comedy about a family trapped in a brown paper bag lunch. I probably wouldn’t enjoy Sack Lunch if it were real, but then again, unlike The English Patient, it doesn’t end with the hero making a deal with the Nazis to go see his beloved.

What If…? Episode 8 Opens a New Age With Marvel’s Penultimate Chapter