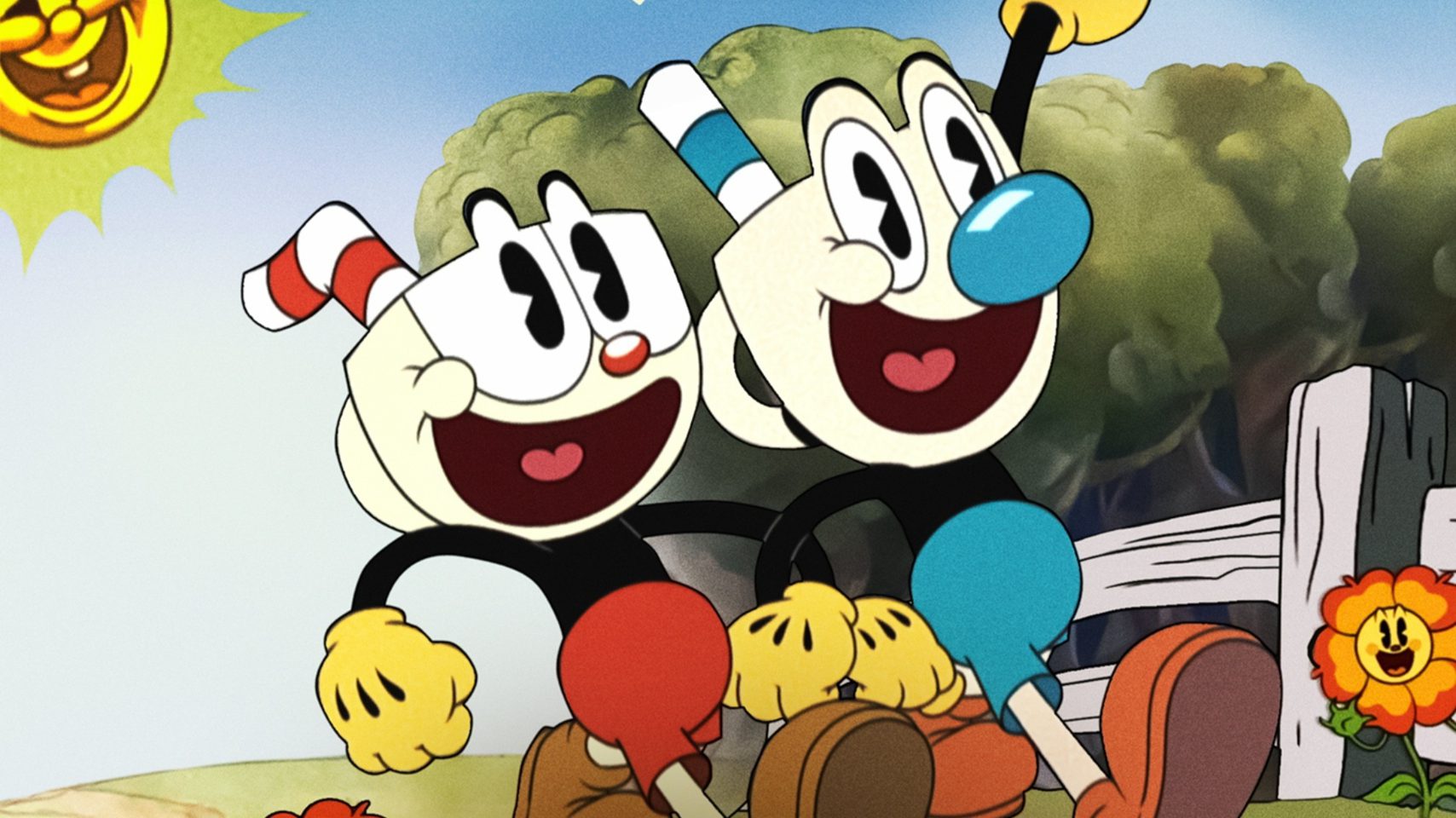 Over the last few years, Netflix has toppled the efforts of other networks and streaming platforms when attempting to create video game adaptations for the small screen. Castlevania, Arcane, and Carmen Sandiego are just a few examples of how Netflix has managed to bring several iconic digitized worlds to new life without being knocked around by television critics and longtime fans of each franchise. With The Cuphead Show!, Studio MDHR’s 1930s inspired nostalgia trip seemed like a match made in heaven for the two collaborators. Sadly though, Netflix’s latest adaptation was made with the Devil’s scheme at the helm. The adventures of Cuphead and Mugman are disappointingly the equivalent to days spoiled milk as their animated series nosedives into insanity with a small cherry-picking of wonderful ideas.

For families seeking an entertaining afternoon, The Cuphead Show! will have their back. However, any diehard fan of the video game or viewer looking deeper into its structure will unearth a whole carton of problems despite being able to enjoy the show’s wonderful atmosphere.

Giving Up The Soul

The Cuphead Show! is far from being the adaptation of Studio MDHR’s video game that fans have been anticipating, but the series is also not a complete travesty in its own right. Netflix’s adaptation carries one major overarching problem across its dozen episode count: there is a whole lot going on that Cuphead fans will consider nothingness as the story continually strays from the titular character’s contract with the Devil. While it may contain plenty of the characters and locations from the video game, The Cuphead Show! takes its own direction with questionable liberties to build upon its cast and create a less intriguing plot. In the first episode, Cuphead becomes a rival to the Devil after he manages to evade giving the underworld ruler his soul, but then the show just becomes one massive kerfuffle.

Much like how Cuphead originally gambles his soul to the Devil in the video game, the Netflix adaptation sacrifices a lot of the source material’s charm by only using its original silent narrative as background noise and inspiration. For any Cuphead fan looking to explore how the two brothers managed to swindle their greatest threat by completing his contracts, you will not find what you are looking for here. In fact, after the premiere, fans of the video game will probably be quickly left wondering what The Cuphead Show! actually has to do with Cuphead. The entire story goes off the rails until just before the halfway point when the Devil is reintroduced along with King Dice. After Cuphead and his archnemesis make one more confrontation, it’s back to being the meaningless adventures of the brother duo.

Even though the show’s attempt to focus on character building by spotlighting the relationship between Cuphead and Mugman is fine, the majority of the episodes play out like a failed entry of the recent SpongeBob SquarePants seasons. Rather than a classy and humorous short story reminiscent of its 1930s Walt Disney inspirations, the show often banks on unwanted modern tendencies. The Cuphead Show! was handed everything it needs to be successful; an incredibly engaging esthetic, creative character designs, a blast of a score, and a formulaic structure that should easily be adaptable to a streaming series. Yet, the whole series constantly stumbles within inconsistencies and failed comedy writing. The show is littered with great build-ups and poor payoffs as it constantly flip-flops in quality.

The Inked and Unwell Isles

The largest overarching issue of The Cuphead Show! is arguably its lack of connectivity to its source material and itself. While the game was going to need changes to its story for that kid-friendly age rating and thorough characterizations, The Cuphead Show! never feels as if it is doing anything truly substantial with Studio MDHR’s side-scrolling masterpiece. The original Cuphead game had a simple story but one that was never disregarded by players; the idea that Cuphead was working for the Devil to regain his mortality worked in favor of the title’s structure. Overall, many of the brilliant specialties under Cuphead’s gorgeous surface that made it a hit have been stripped away from Netflix’s interpretation of the characters. Engaging visuals and a pleasant soundtrack are never enough to save The Cuphead Show! from being anything above a subpar sitcom for children.

The narrative rarely lands in a place that is exceptional as episodes bounce between disconnecting themes and strange endings that never feel earned. Cuphead could clearly work as a television series–in fact, the video game upholds a formulaic structure that a cartoon of this magnitude should contain (episodic villains and an overarching goal). Rather than having a series dedicated to Cuphead and Mugman collecting contracts for the Devil in a PG way, what viewers are given is a show centered around two annoying juveniles running amuck as their villain begs for a vacation. The episodes that do work are so far and few, but extremely memorable because of how they successfully orchestrate a major payoff and naturally insert their characters into a conflict rather than bombastically causing it.

Creating a formulaic or serialized comedy does not mean a show can escape the need for a proper narrative with an underlying purpose or developing characters. The final episode implies that the show’s barebones story has somewhere next to go, but it is hard to imagine that most fans of the Cuphead game or new viewers of the franchise will even care–that is if they even will make it to the end. Outside of the Devil’s trouble to capture Cuphead’s soul and Mugman’s vigilance for his brother, the show never spends time building upon an actual plot as it focuses on situational comedy. And speaking of, The Cuphead Show! has a sense of humor that can be extremely hit or miss.

For a series focused on comedy, many of the episodes often make a key writing mistake of trying to be funny because a scenario is random rather than developing towards one massive payoff–which is also baffling when taking into account that people who have nailed the formula like Dave Wasson (Mickey Mouse Shorts) and Cosmo Segurson (Rocko’s Modern Life: Static Cling) were behind this series. As to be expected, the best jokes in the show are always the ones the audience can see coming from a mile away, whether that be a punchline or some ridiculous form of slapstick. When each scenario is being cohesively glued together, the humor and fundamental theme collide well together. When the scenario derails into unoriginality and the comedy fails, the show falls flat.

Luckily, even when the narrative collapses The Cuphead Show! still keeps itself slightly stable thanks to its oddball cast of retro-inspired misfits who have great chemistry. The show undoubtedly feels rich and alive thanks to its cast despite some key players having trouble keeping up with consistencies. Even if he may be fun to watch, Cuphead himself noticeably jumps between personality traits as the cocky cup always seems to eventually do something out of character. Throughout the first few episodes, it really feels as if the showrunners did not have a clear direction for their protagonist, unlike the other leads. Nonetheless, no matter if the audience is watching Cuphead’s brother Mugman, the Devil, or even Papa Kettle, the vast majority of the show’s characters help keep the audience interested in seeing where situations and scenarios may head.

While the story and humor might be all over the place, at the very least the show’s saving grace can be found in its wonderful animation, music, and voice acting. The overall presentation of The Cuphead Show! is nowhere near as perfect as the video game, but that does not mean the adaptation is automatically failing to bring together a proper atmosphere. The adaptation’s approach to lightly modernizing the Cuphead’s presentation is absolutely successful and never lets audiences down. The show is brimming with color and detail at every frame. Ego Plum’s score draws a lot of inspiration from Kristofer Maddigan’s original soundtrack and even builds off some of his banging earworms like “Botanic Panic”. Every member of the voice cast is giving it their all as they fittingly bring the residents of the Inkwell Isles to life.

There is a clear passion for Cuphead here, but without a proper narrative and consistent writing, the adaptation will only have viewers wishing they were just playing the video game.

The Devil Gets No Deal Today

While it may initially show a lot of promise, The Cuphead Show! slowly dissolves into a spoiled adaptation of Studio MDHR’s standout work. It may not be unwatchable or even bad by any means, but the series as a whole fails to remain captivating as it lacks an identity that will satisfy fans of the original video game–maybe oblivious kids will enjoy the humor, but the lost potential gushes within every entry. The Cuphead Show! has a lot to offer, but not enough that would make it worth gambling a life for. With the show ending on an odd cliffhanger, perhaps Cuphead and Mugman can take their narrative somewhere. Right now though, their future is looking to be living with the Devil. The best deal Cuphead fans can make with Netflix is to cherry-pick the finest episodes and pass up the rest. The Cuphead Show! will be a fun binge for families, but a glowing mess for those who fell in love with Studio MDHR’s game.