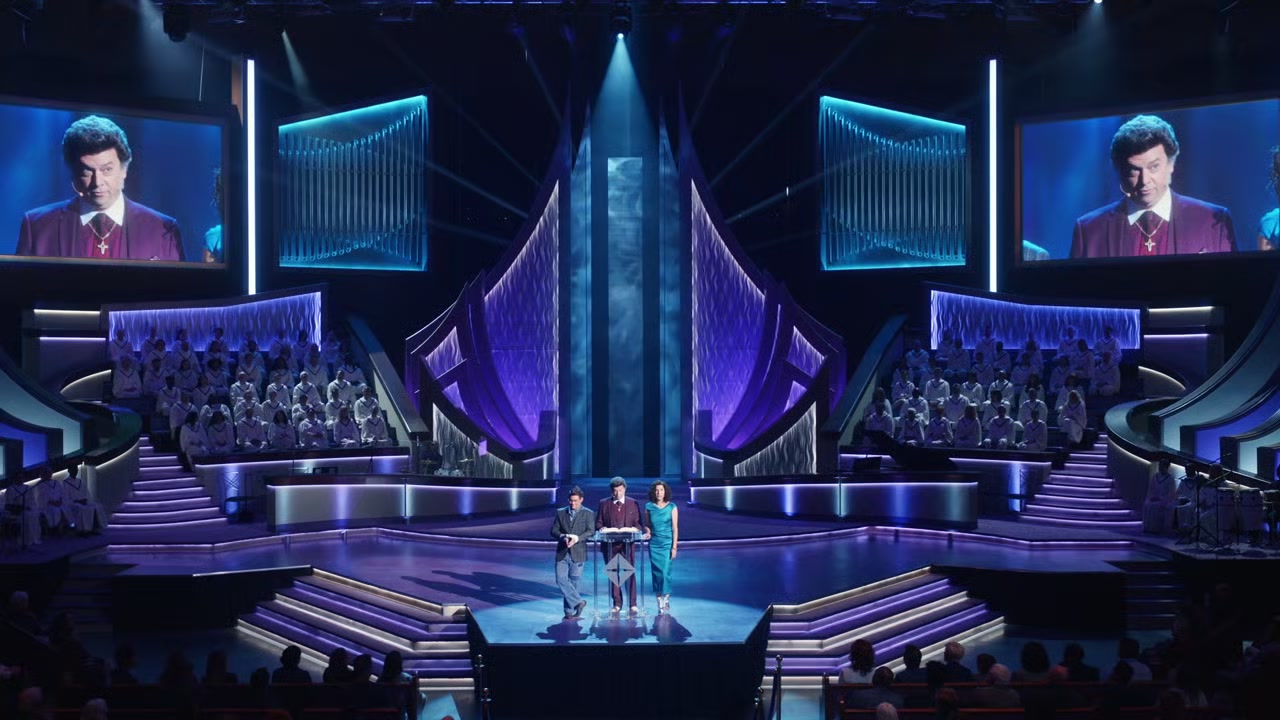 With Eli Gemstone lying in a coma, The Righteous Gemstones has written itself into a bit of a pickle, sidelining this season’s main narrative thrust, leaving his children to pick up the pieces “And Infants Shall Rule Over Them”. It’s certainly not the first time Eli’s faced violence – he was pistol-whipped during the Easter robbery in season one, and who knows what else he did under the guise of Glen Marsh – but with him on life support after the Cycle Ninjas ambush, The Righteous Gemstones opens in a much more dire, dramatic place than it normally resides. And though Gemstones has proven to be surprisingly versatile across its first two seasons, this episode definitely feels out of rhythm for a bit, uncomfortable in the suddenly-escalated trappings of life and death stakes, fumbling for a thoroughline until righting itself in an exceptionally strong third act.

In a way, “And Infants Shall Rule Over Them” recognizes the inherent awkwardness, and tries to settle the tension with an opening puke-out between the Next Generation of Gemstones; a group, as we already know, that’s woefully unprepared to exist without their father guiding (and often, restraining) them. The first 15 episodes of this series have made this simple fact their bread and butter; so when “And Infants Shall Rule Over Them” begins to pull on those threads in the same familiar ways, it quickly became clear this episode is filling space and killing time, rather than pushing things forward in meaningful ways.

(I mean, look no further than where the episode ends, right as things are starting to happen..)

So for most of its running time, “And Infants” is Gemstones going through the paces before (what I imagine) is a large shift in dynamics to close the season. Jesse is overwhelmed and lacks the charisma of Eli on TV, Judy is tied up in a Baby Billy plot that feels completely out of place, and Kelvin is… well, it’s hard to tell what the fuck is going on with Kelvin, beyond the fact that in two seasons, he’s now had two major epiphanies to restore his faith… and not much else. Through Kelvin, The Righteous Gemstones has walked into one of the only major problems with its multi-faceted premise; if by definition, your characters are incapable of growth, then there are diminishing returns on the dramatic and comedic results of their behavior, especially as it begins to repeat itself.

Kelvin’s moment of faith here is not dissimilar to the one he had during his brief goth era; here, the conflict is with Eli, rather than Keefe, but the journey (minus some broken thumbs) are essentially the same. Kelvin’s crisis of faith is resolved, and we briefly peek through the veneer of the youngest Gemstone child to see the fearful desperation to be accepted and loved. Of course, The Righteous Gemstones may ultimately find a new path for Kelvin at the end of this story; I’m still confident they will, but the genesis of it, at least to the end of this week’s episode, feels all-too-familiar in ways that undercut emotional tension at the heart of the story.

Kelvin’s presence is the real glaring weakness in “And Infants Shall Rule Among Them”, an episode that feels far busier than most Gemstones episodes are, which limit each story’s ability to build. The highlight, of course, is the quasi-girl’s night Judy, Amber and Tiffany have as they lament the strange idiosyncrasies of their family – Tiffany’s really shaping up to be the season’s quiet MVP, as perhaps the most good-hearted person (relatively speaking) among the Gemstone’s extended family. (I mean, when she says “thanks, nieces”, doesn’t your heart just melt?)

As BJ teaches Tiffany to read, and Judy guides her not-so-gently into the tides of the Gemstone family dramas, it feels like Gemstones is finding its way into a really strong character arc. With Baby Billy’s magnetic presence (and hair/teeth combo) briefly out of frame, Tiffany’s wholeheartedness is front and center, giving a character (who did accidentally murder Scotty in season one, lest we forget) a lot of balance – Valyn Hall’s always given great presence to what’s been a pretty limited role to this point, and seeing it pay off and blossom in “And Infants” is a pleasure to watch (it also involves one of the funniest physical gags of the entire series, when Baby Billy tries to drive off and flips the elixir-holding trailer on the back of his car, a little added bonus).

Considering the episode through the lens of Tiffany and Gideon – who shows off his stuntman skills taking out the Cycle Ninjas in an exciting climactic scene – is where “And Infants Shall Rule Over Them” finds its pathos, and earns its title. While Jesse and Amber flounder at the limits of their narcissism and ambition, Tiffany and Gideon are making decisions to define themselves as human beings; Tiffany in having a voice in her marriage and life, and Gideon as being a man who believes in something more than talking shit and coasting along as a fraud. Another character who has sat in the background this season, Gideon’s evolution has been a missing piece of resolution in this season – turns out The Righteous Gemstones was holding onto it for the right moment, and it’s a gamble that pays off.

Gideon’s conversation with Jesse is the other major highlight of the episode; Gideon’s always known that he didn’t fit in with his family. He dreamed of being a stuntman, the person who is seen and respected, but not known – he doesn’t want to be leading the Gemstone empire, or aspiring to be either a con artist (boy, did that not go well for him) or a person driven by unbridled ambition, or more importantly, insecurity. Like BJ says, “sometimes a person just gotta do person stuff” and embrace who they are as human beings – Gideon is a person who wants to protect his family and get vindication for his grandfather, even if they are people he struggles to love.

In that way, he completes the trio of the ‘truly’ righteous Gemstones (loosely speaking), a triumvirate headed by BJ, Gideon, and Tiffany (with Keefe creepily lurking in the background, ready to help anyone pee if they need a hand); and more importantly, gives season two a much-needed sense of shape. Though “And Infants Shall Rule Over Them” may not be the most memorable episode of the Gemstones (save for its physical gags), where it finds its voice is really impactful, and sets up the final two episodes of the season in fascinating ways. The Gemstone family is clearly blessed with miracles (check the scoreboard – we’re at two people brought back from the brink of death), but they’re fundamentally broken in so many ways without the king and queen who broke them. It may be too late for the Gemstone children, but perhaps there is hope in the form of the family’s next generation.

Yellowjackets – What do We Want to Happen in Season 2?

Netflix’s The Cuphead Show! Spills With a Spoiled Adaptation