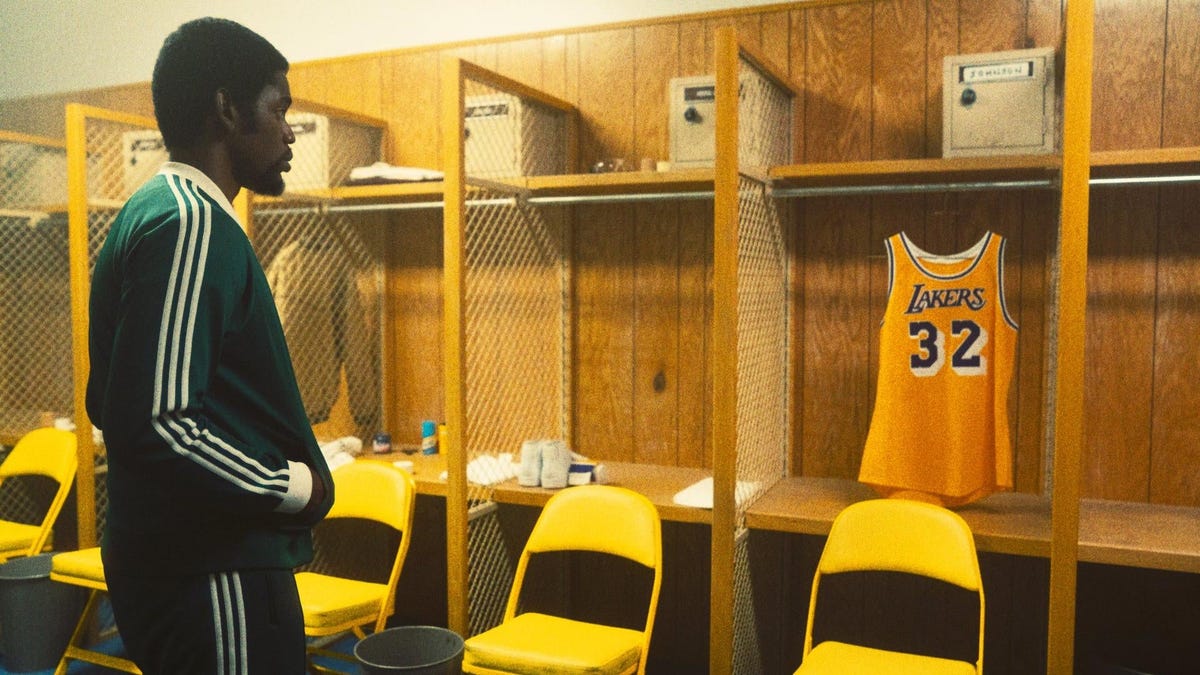 A Look at the Accuracy Questions in Winning Time

Winning Time: The Rise of the Lakers Dynasty, the HBO series about the first year of the Los Angeles Lakers dynasty in the early 1980s, has been primarily known for two things throughout its run so far: Massive ratings and popularity, and questions about its accuracy.

On the former question, the series has already been renewed for a second season, and on the latter, several of the real-life people depicted in the series have objected strenuously to their depiction on the show.

Winning Time is based on Showtime, the nonfiction book by journalist Jeff Pearlman about those Lakers teams; it’s executive-produced by Adam McKay, although Max Borenstein and Jim Hecht are the main creatives behind the series. Because the series is on HBO and not Showtime, a name change was necessary.

HBO has strongly defended the series.

“HBO has a long history of producing compelling content drawn from actual facts and events that are fictionalized in part for dramatic purposes,” the network said in late April.  “‘Winning Time’ is not a documentary and has not been presented as such. However, the series and its depictions are based on extensive factual research and reliable sourcing, and HBO stands resolutely behind our talented creators and cast who have brought a dramatization of this epic chapter in basketball history to the screen.”

Former Lakers owner Jerry Buss, played on the show by John C. Reilly as an ambitious horndog, is deceased; his daughter Jeanie, who currently runs the team and is depicted on the show as a wide-eyed young employee of the team, has been relatively quiet about the series.

A guide to the many factual controversies laid out by the first season of Winning Time:

The depiction of Jerry West

Jerry West was an all-time great NBA player, to the point where his likeness was the basis for the NBA logo. By the time of the events of Winning Time, West has stepped down from a stint of coaching the team and was working as a scout; he would take over as general manager of the team and hold that job for the entirety of the Lakers’ 1980s run.

West, played by Jason Clarke, is depicted as a bitter rage case, constantly snapping at people and throwing things, including golf clubs and his NBA Finals MVP trophy. Later in the series, West is given more humanity and sympathy.

To say West has reacted negatively to the portrayal is, to put it mildly. The 83-year-old Hall of Famer has described his portrayal as “a baseless and malicious assault,” and demanded a retraction and apology.

“Winning Time falsely and cruelly portrays Mr. West as an out-of-control, intoxicated rageaholic,” [which] “bears no resemblance to the real man.” West went on to threaten to sue the network, and even take the case to the Supreme Court.

Others have backed up West, including players and staffers for the Lakers, as well as members of the media. Marc Stein, the veteran NBA writer, also ripped the depiction of West in the first episode.

“Jerry West’s old office at The Fabulous Forum did not have windows to hurl objects through in anger. None of the Forum’s basketball offices did,” Stein wrote of the episode in which West threw the trophy, adding that West also did not keep that particular trophy in his office. He also doubted whether the scene where  Magic and Norm Nixon played one on one at a fancy party really happened.

Kareem Abdul-Jabbar has denied that West ever broke golf clubs, but it’s also been noted that West admitted in his own autobiography to having done so.

Chick Hearn was the legendary TV announcer for the Lakers for more than 40 years, up until his death in 2002.

On the show, portrayed by Spencer Garrett, Hearn drops some casual racist comments, such as referring to a security guard as a “gorilla,” in a conversation with Pat Riley (Adrien Brody) who was his broadcast partner at the time. He later dropped sexist and homophobic language, including describing Riley’s speaking voice as “faggy.”

It’s not clear if Hearn used that type of language in private — per one report, the exchange does not appear in Pearlman’s book — although Hearn did once refer to a Black player, after a long dunk, as having been “up there so long he could have eaten a banana,” one of a few incidents in which Hearn was accused of using, at the very least, insensitive language.

Kareem Abdul-Jabbar, who is depicted frequently in Winning Time, denounced the series, more for being “boring” than for any factual inaccuracy.

“Each character is reduced to a single bold trait as if the writers were afraid anything more complex would tax the viewers’ comprehension. Jerry Buss is Egomaniac Entrepreneur, Jerry West is Crazed Coach, Magic Johnson is Sexual Simpleton, I’m Pompous Prick. They are caricatures, not characters. Amusement park portraits that emphasize one physical feature to amplify your appearance—but never touching the essence.”

Magic Johnson, the other player who is heavily featured in Winning Time, has said that he hasn’t watched the show.

Winning Time shows Kareem, on the set of the movie Airplane!, refusing an autograph to a child actor and even cursing him out. Kareem, perhaps unsurprisingly, denies that this ever happened. And he’s backed up by the directors of Airplane!, the “ZAZ” trio of Jim Abrahams, David Zucker, and Jerry Zucker, who also made the Naked Gun films. They wrote a letter to the Los Angeles Times, stating not only that this never happened, but stating that the actor who played the kid denied it as well.

The Airplane! directors, however, had agreed to appear as themselves in the scene in question. It’s not clear if they objected in the moment.

In the season depicted in the show, the Lakers did not play the Boston Celtics for the championship; their NBA Finals matchup was against Philadelphia, although the Lakers and Celtics played for the title three times in the ’80s. However, the series clearly wanted to depict that rivalry, as well as the one between Magic and Larry Bird, so a large chunk of an episode features a regular-season game between the teams, at the Boston Garden.

It sticks largely to what really happened, although in real life, Magic Johnson wasn’t on the floor for most of the fourth quarter.

Paul Westhead, played on the show by Jason Segel, has one of the most compelling arcs on Winning Time, a former professor hired by the Lakers as an assistant coach and becoming the accidental head coach of the team following the bike accident by coach Jack McKinney.

Depicted as unconfident and unsure of himself, Westhead slowly earns the respect of his team and, to spoil the finale, ultimately leads them to a championship.

Westhead was fired the following year, as part of a clash with Magic Johnson that will presumably form a major part of the plot of season 2 of Winning Time. Pat Riley coached the Lakers for most of the rest of the ’80s, while Westhead went on to a lengthy, well-traveled coaching career, in both college and professional basketball, and coaching both men and women.

What does Westhead think about the show? The now 83-year-old coach addressed it in an interview last week with Ray Didinger and Glen Macnow of the Philadelphia sports radio station WIP. While Westhead acknowledged that the show was “loosely” based on the actual events, he stated that he was watching the show, and didn’t appear to be especially upset about the show.

“If accuracy is what the goal is, they’ve missed,” he said. “But I’ve been out here in L.A. long enough to know it’s showbiz, and if they don’t portray you the way you are, and the way it really happened, then what are you gonna do about it?” The interviewer noted that the show’s depiction of the Lakers nearly replacing Westhead with Elgin Baylor was a complete invention. Nor, per Westhead, did Pat Riley ever grab Westhead and push him into a shower, as the show said.

Jerry Tarkanian and the “mob hit”

One of the great what-ifs of the Lakers dynasty is when Jerry Buss nearly hired Jerry Tarkanian, the coach of UNLV, to coach the team in 1979. But the deal ultimately fell apart after Tarkanian’s right-hand man, Vic Weiss, was found dead in the trunk of a car.

Weiss really was murdered in 1979, and the murder hasn’t been solved. But there’s little evidence that his death had anything to do with the Lakers’ courtship of Tarkanian, nor was Jerry Buss’ business card found on Weiss’ person, as shown on the show.

Tarkanian instead remained at UNLV, spending the 1980s operating a successful but frequently scandal-plagued program. He finally went to the NBA to coach San Antonio in 1992 but lasted less than a full season.

Did Spencer Haywood really try to “kill” the Lakers?

The climax of the ninth episode shows Haywood, upside after he was kicked off the team for drug use, appearing to hire a hitman to kill “the Lakers.”

Haywood said in a 2014 interview that he ordered Westhead personally to be killed, although he later called off the hit and no harm came to the coach or anyone else associated with the team. The episode also fudges some details about how the player’s dismissal came about, both in terms of the timing and how it happened (it was not put to a vote.)

The Offer is an Uneven but Entertaining History of The Godfather