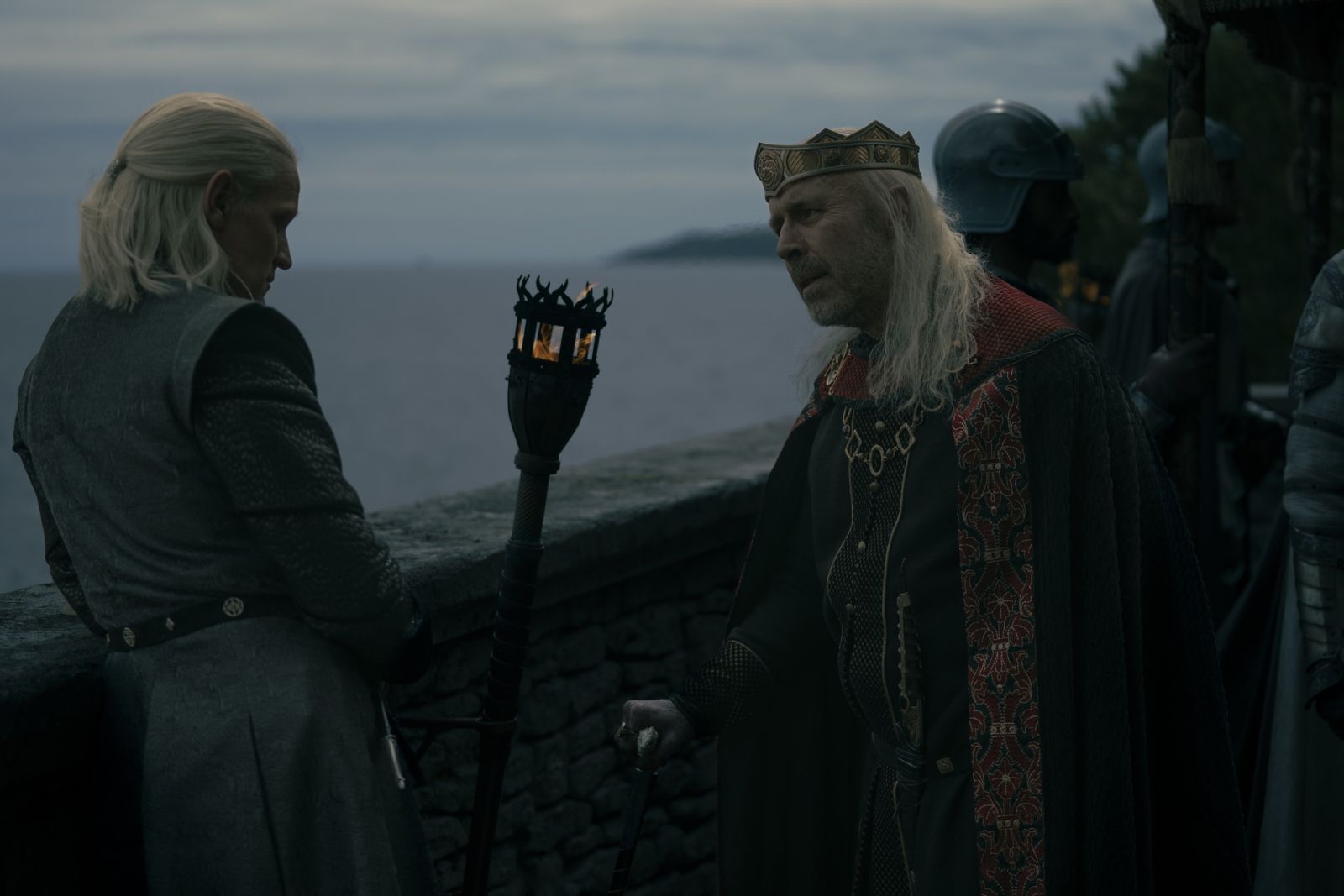 After a particularly weak sixth episode and a disappointing end to an otherwise stellar fifth, House of the Dragon has been starting to stumble a bit. The Wikipedia-like dryness of its sixth episode left expectations low for this week’s new episode “Driftmark.” Luckily, the seventh episode manages to rekindle some of the flames that were beginning to fade. “Driftmark” isn’t perfect; many of its scenes struggle to maintain interest, and it has some serious issues with pacing and consistency. However, the moments that it does get right are absolutely phenomenal, and the episode’s highs are more than good enough to make up for some of its lows. Fans will likely leave feeling satisfied and hopeful for the remaining 3 episodes.

Much like the rest of House of the Dragon, “Driftmark” chooses to focus on one event at one single location in contrast to the world-spanning jumps that characterized Game of Thrones. A risky choice, this shift allows for more intimacy and focus (as well as a distinct identity that separates this show from its predecessor), but it also risks losing viewer attention or becoming a bit dull. “Driftmark” drifts back and forth between the benefits of intimacy and the dangers of becoming boring: there are moments that get so uninteresting that some viewers might want to consider doing chores while the show plays in the background, and there are others that capture the profound beauty and sensitivity that make House of the Dragon at its best so special.

The episode takes place at the funeral of Lady Laena Velaryon (Nanna Blondell), and largely focuses around a mixture of mourning and drama caused by Targaryens Behaving Badly. Seeing Laena’s children, parents, and brother all mourn her in their own ways is heartbreaking, and the episode spends a lot of time beautifully depicting how loved she was and how deeply her loss is felt by her community. The portrayal is touching, although it would have been nice if more of Laena’s plotlines from the novel had been retained before her death. The scene would have likely been more impactful if audiences had learned more about Laena and gotten to spend more time with her.

There is no longer any subtlety about the fact that Alicent (Olivia Cooke) and Rhaenyra (Emma D’Arcy) absolutely hate each other, and it is obvious to everyone that conflict is escalating between Alicent’s supporters (the “Greens”) and Rhaenyra’s (the “Blacks”). Alicent openly denies Rhaenyra’s sons’ parentage, and it is clear that she is making a move towards positioning her own children as the proper heirs to the throne and denying Rhaenyra’s claim to legitimacy. “Driftmark” spends a lot of time illustrating and escalating this conflict, and any parts of the episode that aren’t marked by funeral mourning are marked by violence, fighting, and scheming between the two sides.

What is interesting about “Driftmark” is that its most boring scenes are the ones that seem like they should be the most exciting. A majestic, highly-produced dragon riding scene and a steamy sex scene actually slow the episode down and make it harder to stay interested. It is the more subdued moments – a meaningful hand holding at a funeral, a serious conversation about marriage duties, and a dialogue about the nature of fire and water – that really make the episode pop.

This might seem like proof that the Game of Thrones staples of dragons, sex, and swordfights don’t work as well in House of the Dragon, which demands a more personal tone. However, this isn’t entirely true; House of the Dragon has had its share of memorable scenes involving all three of these things. The biggest difference is that the spectacular scenes in this episode lack emotional payoff because the episode doesn’t effectively build up to them. What makes the spectacular and grandiose moments in a series like this powerful is when they mean something in a larger context; when the show doesn’t do the development work before a scene like this, the scene itself suffers.

Watching Aemond (Leo Ashton) ride a dragon isn’t particularly meaningful because we haven’t had the chance to spend much time with Aemond yet. At the beginning of this episode, Aemond is still a fairly new character who hasn’t had much development, so his drawn-out dragon riding scene doesn’t have the emotional payoff of seeing someone well-established and strongly developed like Rhaenyra or Daenerys (Emilia Clarke) ride one. Similarly, the sex scene in this episode is between two characters who have already had a sex scene, and there is not enough buildup to make this moment as poignant as it could have been if it had been placed slightly later in the episode after the two had interacted more. As it stands, these moments seem a bit empty and ultimately slow the pacing down, which hinders an otherwise well-written episode.

At its strongest, “Driftmark” has some of the best-written dialogue thus far. While Charmaine DeGraté’s script for “We Light the Way” still stands out as a high point for writing in the series, her otherwise-fantastic episode was soured by a poor ending. While the writing in “Driftmark” is less consistent and powerful as the writing in”We Light the Way,” it has a stronger ending. “Driftmark’s” best moments are beautifully penned, and it contains some of the most memorable lines, monologues, and exchanges in the series thus far. Highlights in the script include a searing jab at Alicent from Rhaenyra, a beautiful reflection on the relationship between power and freedom between Rhaenyra and Daemon (Matt Smith), and a touching moment of connection between Rhaenyra and her husband Laenor (John Macmillan).

Unsurprisingly, all three of the episode’s strongest moments feature Rhaenyra, who has rightfully become a fan favourite character. Emma D’Arcy has proven that they are the right person to follow in Milly Alcock’s impressive footsteps; all of the nuance and intensity displayed in Alcock’s phenomenal performance as a young Rhaenyra are perfectly captured in D’Arcy’s take on the character as an adult. D’Arcy carries the emotional weight and intrigue of the episode with sophistication and grace. Their scene partners Smith, Macmillan, and Cooke also impress, managing to keep pace and portray their characters with a complexity and intensity that matches D’Arcy’s.

While still denied the screentime that his character warrants, Steve Toussaint continue to impress with his portrayal of Velaryon patriarch Corlys. Corlys goes through a lot in this episode; he experiences the trauma of losing a daughter while still having to remain strong to support his grandchildren, and Toussant approaches the character with compassion and care. The episode’s child actors are also impressive, and the series’ younger characters are becoming more interesting; Shani Smethurst and Eva Ossei-Gerning give powerful performances as Laena’s grieving daughters, and Leo Ashton makes Aemond just the right amount of annoying. Through its ups and downs, the one thing that has remained consistently strong in House of the Dragon is its acting.

One surprising shift in the show’s writing is a brief turn to melodrama in one scene that almost feels farcical. Alicent and Cristen Cole have practically become cartoon villains, and one almost expects them to start twirling comical moustaches as they engage in extravagant, villainous buffoonery. The writers are clearly trying to make it unambiguous that you’re not supposed to like them, and their puritanical extremism and ridiculous choices are getting a tiny bit overdone. Even when Cersei Lannister was at her most extreme, she still felt like a fleshed-out character, whereas these two are becoming flatter and more caricatured every episode. While the bumbling antics of zany but flat villains can be fun, they’re tonally out of place in this series, and one can only hope that the two will get a bit more interesting. Alicent in particular was very well-written before the time jump, so it’s sad to see her reduced to a flailing mess of a character.

On the whole, “Driftmark” is imperfect, but promising. Despite a few struggles and some questionable pacing, the episode as a whole is still a win: there are enough powerful and memorable moments to make it worthwhile, and it ultimately ends up being more good than bad. House of the Dragon has been struggling recently, so it is exciting to see an episode breathe a bit more life into the series and provide hope that the last three episodes can still be something great.

– If House of the Dragon needs a good spinoff idea, I would like to propose The Gay Adventures of Ser Laenor and Qarl. The final scene, depicting the two of them rowing away to a life of freedom in Essos, is absolutely delightful and heartwarming. The episode’s clever foreshadowing of this twist (including Rhaenyra’s moving dialogue with Daemon about the nature of fire and water) make it all the more satisfying!

– Last week, I criticized the show for changing the novel in a way that reduced a Black woman’s role in the plot: Laena has a much bigger role in Fire & Blood, and seeing many of her pivotal scenes and moments removed for House of the Dragon is concerning considering Game of Thrones’ problematic racial history. In general, changes from the ASOIAF novels in the television show have often served to harm, rather than help, marginalized characters (see: Loras Tyrell), a rather concerning trend.  In a surprising turn of events, “Driftmark” actually does the opposite: it makes a major change to the source material in order to spare the life of a queer character and it treats his romantic relationship with more respect and dignity. Here’s hoping that this is a promising indication of how ASOIAF material will handle marginalized characters in the future!

– This episode is by far one of the most quotable episodes we’ve gotten so far. ““Exhausting, wasn’t it? Hiding beneath the cloak of your own righteousness. But now they see you as you are” and “history does not remember blood. It remembers Names” are both memorable lines, and they have a place alongside iconic ASOIAF likes like “I wish I was the monster you think I am.” House of the Dragon is starting to prove again that it is something worth getting excited about!

The Twisted Targaryen Family Tree on House of the Dragon