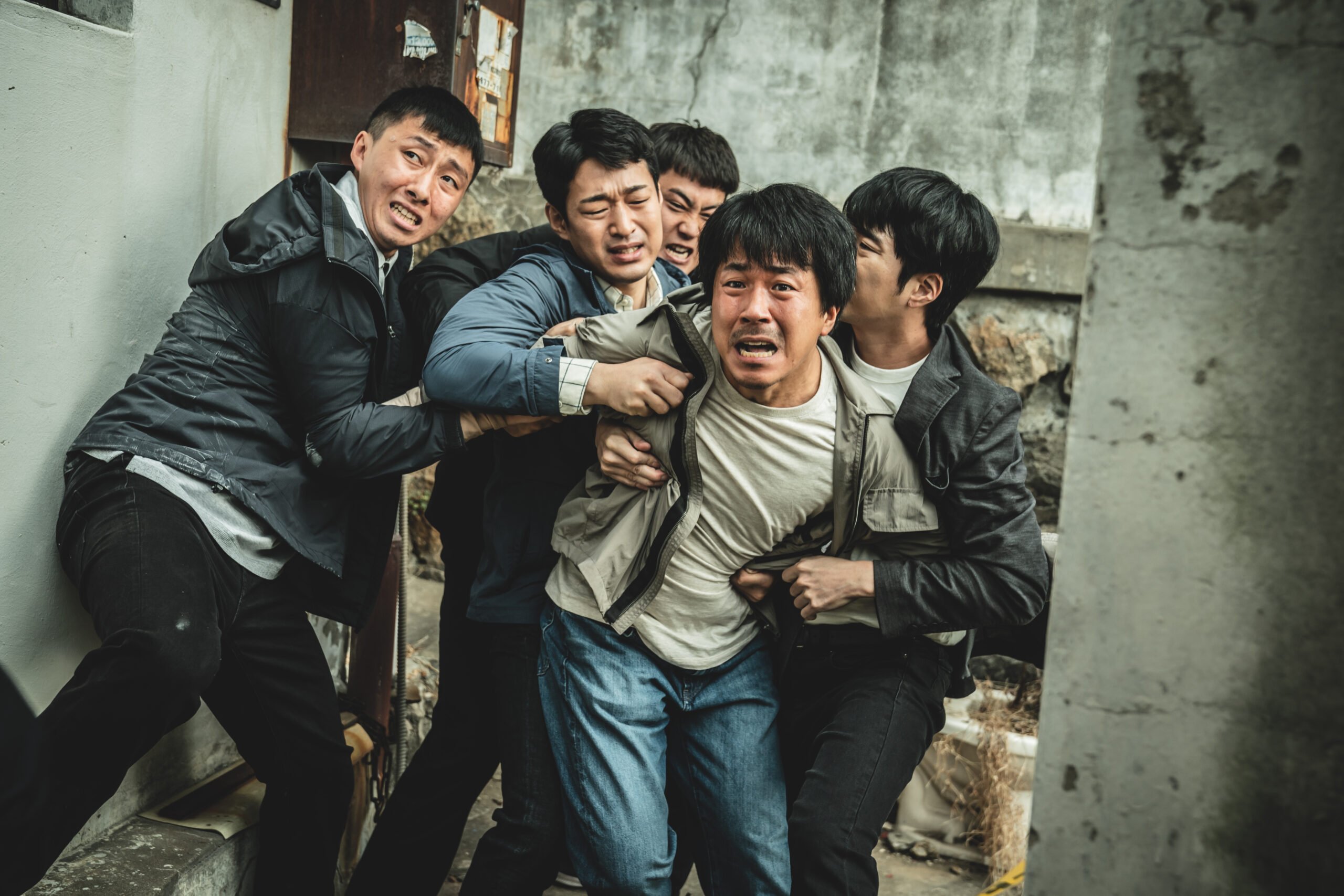 Weaponizing religion and arming it with strange phenomena that cannot be explained, Hellbound is an incendiary television series. In the span of six episodes, Yeon Sang-ho (Train to Busan) delivers an almost unrelenting exploration of the ways in which humanity can easily be manipulated to believe something and structure their entire lives around that belief. Occasionally punctuated by excessive violence, Hellbound is a nasty piece of work that starts off fascinating and then blends its genre elements with its philosophical concepts into an unwieldy blend of thrills and heady ideas that land somewhat inertly by its conclusion.

Beginning with a supernatural event where people will randomly receive messages from a spectral figure stating they are “bound for Hell” and will die at a set date and time, Hellbound very quickly establishes that the supernatural event isn’t really what matters here. Instead, it’s how quickly anything can turn people to radically alter their lives. As the chairman of The New Truth (a radical new religion that has been talking about these events for a decade), Jeong Jin-soo (Yoo Ah-in) puts it so bluntly: “aside from fear, what else makes people repent?” At the core of the New Truth is the belief that the only way humans can change is through fear because nothing else has worked so far.

So naturally, these supernatural events which culminate in three “angels” coming down to Earth and killing people wherever they are at that set date and time, are described as acts of God. From there, the show follows the sudden rise of the New Truth as video evidence proves that these events are really happening and in broad daylight. As the events start happening more and more, it becomes clear that whatever is happening has to be linked to something – because how can something this terrible happen without cause?

There’s an eerie Venn diagram that can be drawn between Hellbound’s cult and the way in which conspiracies can take hold. It feels like in a time of anti-vaccine sentiment and QAnon that Hellbound is just taking another radical conspiracy theory and letting it find something significant to latch onto: this time being God sending sinners to Hell. A tangible sign that something unknown is at work and cannot be explained by science, the demonstrations feed into those fears of the unexplainable and forces people to try to find some way of rationalizing the irrational.

That’s fascinating enough on its own, but throw in the mob mentality and witch hunt that an organization like The Arrowhead represent and it becomes abundantly clear how much Yeon is capturing our current political climate. The Arrowhead are a separate group of activists who have latched onto the fact that sinners are going to Hell and try to find out their sins and committing violent acts against those who are hindering or going against The New Truth’s belief system. It’s in the name of Christianity, essentially, but it’s brought to an extreme. Using internet culture as a means of communication, it taps into modern-day hive minds and the ease with which false information can be spread like wildfire and cause significant irreparable damage.

The first three episodes of Hellbound fully fleshes out the rise of a cult and how it turns a series of seemingly random events into a new way of living. After that point, it makes a bold shift that explores the idea of original sin, doctrines, and how difficult it is to challenge widely-held beliefs. Yeon switches gears to focus more on world-building. Tonally, it gets slightly rockier here, leaning heavily into its melodrama and thriller elements while still keeping heavy concepts in tow. He’s doing a lot and unfortunately, it feels like those first three episodes, while moving briskly, were given more time to breathe due to how crucial they are for the later episodes to work.

Even when it gets slightly clunky in exposition, the ways in which Yeon expands upon Hellbound’s initial concept in the back half of the show is still rewarding. It’s where most of the action of the series is placed and less of the horror elements that define the first half. Initially, it opens as Detective Jin Kyung-hoon (Yang Ik-joon) tries to solve a murder case that everyone believes to be done by these angels from God. However, that all becomes integrated into a story about moving on from grief, which results in a much more interesting personal story that just so happens to be woven into the grander narrative.

The second half is when the personal story that’s woven into the world of people being bound for Hell feels crucial to the ideas being explored but lacks the emotional impact of the previous narrative. It’s logical that Hellbound eventually suffers by trying to keep things small while every episode further expands its world, but Yeon struggles to make the small moments feel character-driven as opposed to plot-driven.

Bingeable as it is due to its minuscule six episodes with only one running a full sixty minutes and quick pacing, Hellbound is more than just another piece of content to consume. The ideas it interrogates are so effectively explored that fans of shows like The Leftovers will probably find more than enough to adore just from the pilot episode. There’s a bit of everything here for genre fans from the anime-like angels that bludgeon and mercilessly torture sinners to the thriller plotlines and pervasive hopelessness that washes over the entirety of the series. Hellbound is relentlessly bleak, but even in its darkest moments are people questioning the status quo – that it provokes the audience to do the same is a tremendous achievement, even if it finds itself stumbling to the finish line.

“Leavetaking” Starts The Wheel of Time Off on the Right Foot

Succession Picks a New President in “What It Takes”