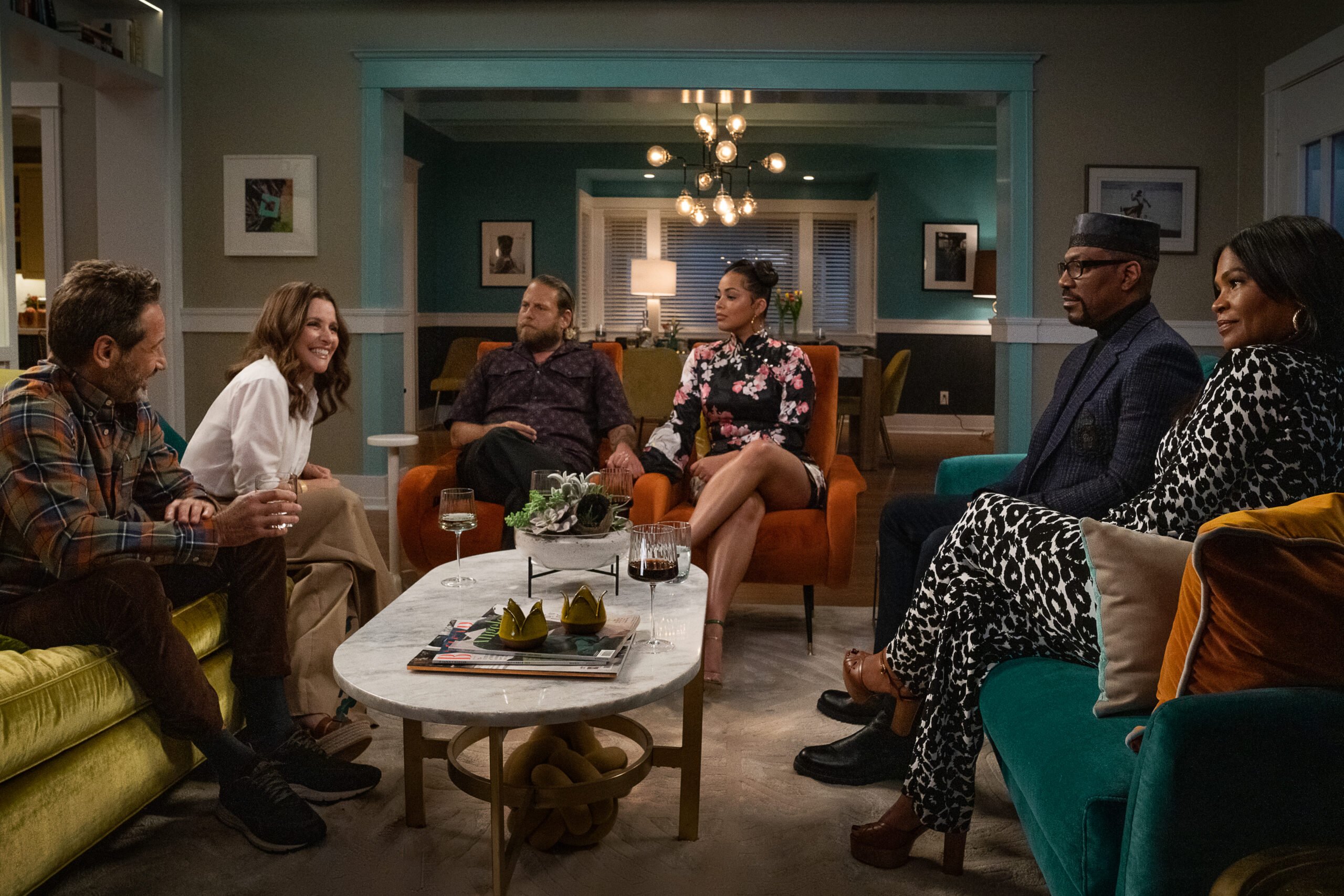 Jonah Hill and Kenya Barris team up with a new riff on Guess Who’s Coming to Dinner, as a Jewish man and Black woman find love amid family discord

One indication that You People works both as a romantic comedy and a piece of satire is that I can anticipate lots of different people have all kinds of bad reactions for very different reasons.

The time, you might say, is perfect for a comedy of manners about Black/Jewish relations, and intermarriage, in America. There’s even one sequence in which a passionate argument about the Holocaust and slavery is followed immediately by a comedy bit featuring… a Kanye West song. That part works even better than was likely intended.

The film was co-written by Black-ish creator Kenya Barris and actor Jonah Hill, with Barris directing and Hill starring. You People is a riff on Guess Who’s Coming to Dinner, brought into the 21st century and adding a Jewish angle.

It’s a sharp satire of a worthy topic that hits at plenty of truths. But considering the level of talent involved, it probably should have been funnier than it is.

Hill plays Ezra, a Jewish guy in Los Angeles who co-hosts a podcast on “the culture” along with his Black co-host (comedian Sam Jay). He soon begins a sweet romance with Amira (Lauren London), a Black woman who’s an aspiring Hollywood costume designer. They even have a creative “meet cute,” in which he thinks her car is an Uber.

They seem a great match but soon hit some complications once they meet their parents: Ezra’s are wealthy Brentwood Jews (Julia Louis-Dreyfus and David Duchovny) who, while earnest liberals, seem completely unable to speak around Black people without making utter fools of themselves. The mom puts her foot in her mouth repeatedly, while the dad instead opts to steer all conversation to the career of rapper and Pimp My Ride host Xzibit.

Yes, it’s Elaine Benes married to Fox Mulder, whose mother is Carla Tortelli. And when it comes to their comfort and penchant for saying the wrong thing around Black people, they recall another classic sitcom character, Michael Scott.

Marina’s dad, meanwhile, is Akbar (Eddie Murphy), a Black Muslim and adherent to the teachings of Louis Farrakhan- someone who, you may have heard, isn’t so fond of Jews, and that feeling is certainly mutual. Married to Nia Long, Akbar is a major skeptic of Ezra for multiple reasons, some of them deserved.

So it’s a battle of wills, featuring numerous scenes of extreme discomfort that make the ones in Meet the Parents look like nothing. Some scenes — starting with the first dinner with both sets of parents — are better than others, starting with a cringy bachelor party sequence.

The film works overtime trying to be fair to the perspectives of the characters, although it makes clear that while Louis-Dreyfus, in particular, is someone who’s clueless in a way that’s repeatedly hurtful, Murphy’s character is actively malevolent, acting with relative glee as he humiliates her daughter’s boyfriend.

There’s a cast of dozens and dozens, including Deon Cole, Mike Epps, and Andrea Savage popping up for quiet scenes. And possibly because of this, a lot of talented people, starting with Molly Gordon as Ezra’s lesbian sister, are left with just about nothing to do, while Rhea Perlman has nearly a non-speaking role.

This idea was done before in the underrated race-reversed Guess Who’s Coming to Dinner remake Guess Who, from 2005 (with Bernie Mac and Ashton Kutcher), as well as a plot arc on Entourage in which Turtle dates a Black woman with a disapproving father (I mention the latter only because the love interest on that show also happened to be played by Lauren London.)

Murphy returns to the big screen for the first time since Dolemite is My Name four years ago (his Coming to America sequel came out in the pandemic depths and never made it to theaters.) It’s a decent performance, even if he’s never quite given an opportunity to be particularly funny, at least in the traditional Murphy sense.

Hill and London are good together and have chemistry, and it’s somewhat refreshing that the obstacles in the way of their romance are real and seemingly insurmountable.

And that’s why the worst thing about You People, by far, is the ending. Previously intractable problems are solved with ridiculous ease, with strong resolves seemingly knocked over with a feather. It’s a happy ending that the movie doesn’t earn in any way whatsoever.