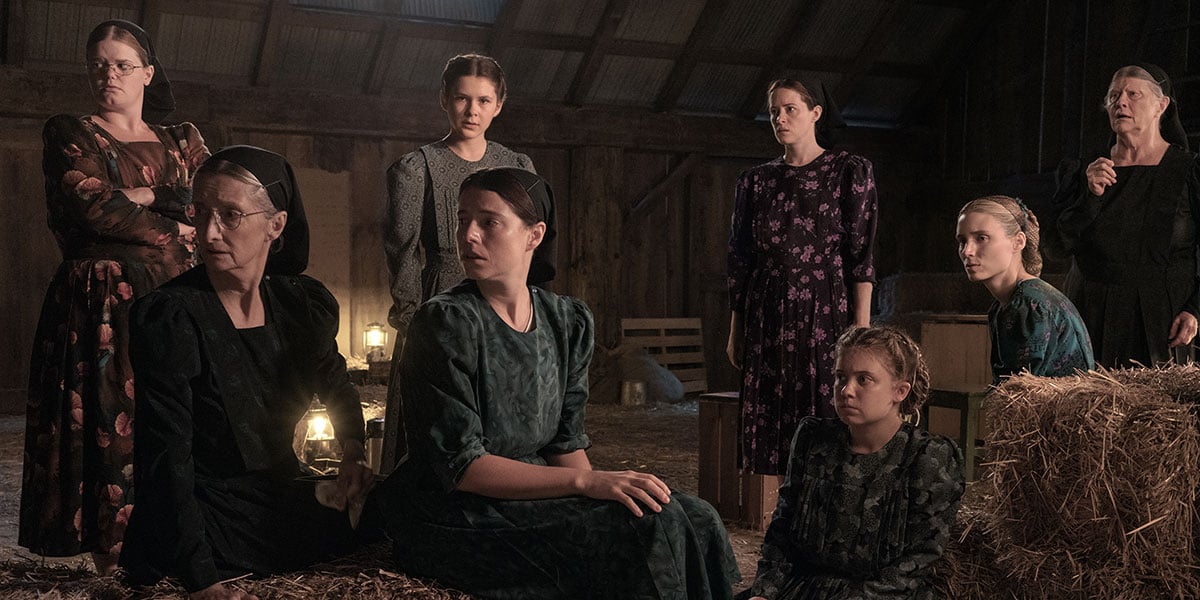 Sarah Polley’s adaptation of Miriam Toews’ 2018 novel of the same name, Women Talking, interrogates the language of trauma with anger and a measured approach. A dialogue-heavy chamber drama that unfolds within a Mennonite community, Polley’s first film in a decade confronts issues of a patriarchal society, the secrecy required to navigate through it, and the ways in which abuse takes hold. Featuring an ensemble cast that provides nuanced, layered performances fueled by fear and love, Women Talking is a ferocious work that magnifies the reality that the world around us builds unbalanced systems of oppression.

In the initial moments of Women Talking, it becomes clear that what may be the feelings of some victims of abuse may be different than others. As a Mennonite community becomes aware of and fed up of multiple accounts of sexual and physical abuse from the men they coexist with, a handful of women are gathered together to make a decision: should they stay and fight the men, or leave and try and forge a new community elsewhere. However, this isn’t a debate about where they’ll live – it’s about survival and preservation of the good that still exists.

Polley’s film is anchored by an array of perspectives, from the hopeful Ona (Rooney Mara) and the angry Salome (Claire Foy) to the stubborn Mariche (Jessie Buckley) and hardened Scarface Janz (Frances McDormand). Each character is played to perfection by their counterparts, they are surrounded by equally impressive performances from the supporting cast of women. The odd man out is August (Ben Whishaw) – a male teacher whose family was excommunicated from the community and has been chosen by the women to take the minutes of their meeting.

Through a series of talking points, the women negotiate their fate within the community. Flashbacks of their past trauma is edited within the conversations as brief glimpses as opposed to full-on memories. Just the fleeting feeling of the pain experienced. It makes for a more character-driven experience despite its large ensemble, and allows Women Talking to explore the way flashes of pain can latch onto a person and take hold of their entire being. Like a parasite that won’t release, it adds to the already bleak atmosphere.

It’s the inclusion of August that makes for the argument that Women Talking is about more than pain and suffering; it’s also about the necessity of compassion and allies to help prepare for a better future. August is a background character, forced into a role predominantly placed upon women in society. He accepts his place within the meeting and understands the role he plays is not one to interject or influence their opinion. The women are all making a serious decision and have brought along a differing perspective but not acknowledging that it exists – not unlike the common scenarios women find themselves in male-dominant jobs as they are forced to be secretaries or sit idly by while men make decisions about their lives.

Polley is aware of both sides of the issue and through characters that seem out of place, she explores why their existence matters to the conversation. In the end, though, it is still the women’s choice of whether they “Stay and fight” or “leave.” The problem is, what do those words really mean? What would be the impact of that? Does leaving mean forgiving, or forgetting? Women Talking is always confronting the idea of language as a trap, and the way certain words can carry multiple meanings. Despite the women themselves not being educated through traditional learning, they’re able to understand how they’ve been manipulated by words before. Experience nourishes understanding.

Women Talking isn’t all dour either, despite its color palette designed to mirror the film’s miserable situation and circumstances. While the women may be trapped within their community, their personalities bleed out into the conversation with vigor. Foy and Buckley both share an intensity in the way they present their characters, but Mara’s performance is compassionate and many of the other women make jokes – as if it’s the only way to cope with the trauma of the past and potential future. That’s not to say that Women Talking is a funny film either, but the characters can’t help bringing levity to the situation and it paints the potential that they may never escape their fate as even more heartbreaking.

Naturally, Women Talking will bring conversations surrounding its timeliness. It is that, of course, but more so it acts as another reminder that this isn’t a type of suffering that is temporary. In fact, it creates generations of pain through the acceptance of suffering; the reluctance to do anything out of fear; and the helplessness that silence creates. Women Talking is set in modern times within a Mennonite community, cut off from the outside world and living within their own created systems of living. The ease with which one can view this sequestered group of women and understand their pain is what makes Women Talking deliver its message of resiliency and strength in the face of trauma that much more incisive.

Holy Spider Tracks a Serial Killer on a Holy Crusade