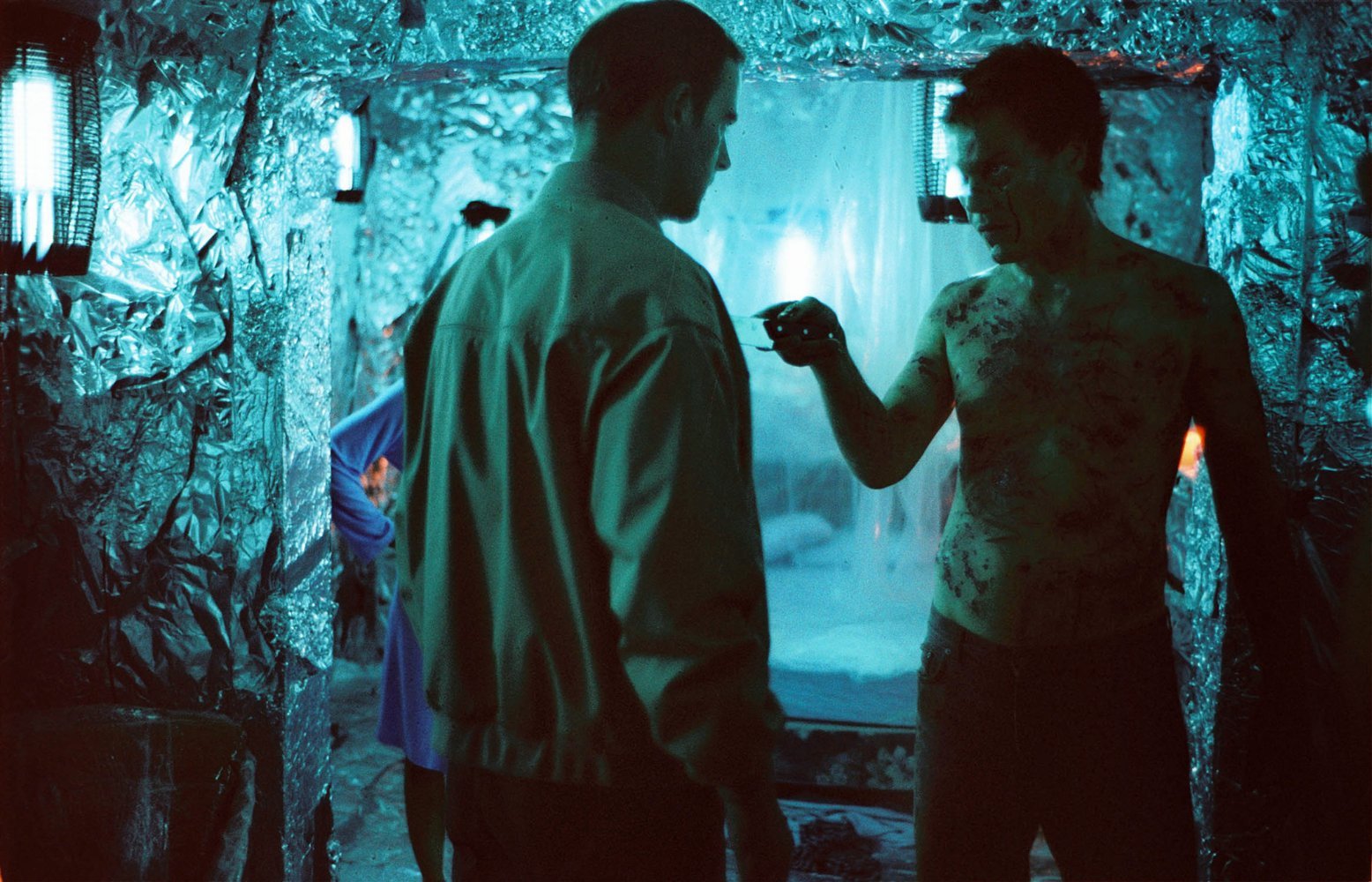 Years ago, a rather controversial and divisive pitch-black comedy/murderous drama called Killer Joe rocked the Kasbah in critical terms, sharing the adulation of some and the damnation of others. It was grimy, grotty and often deliberately gratuitous (to the point that its most shocking scene earned a subtle nod on its DVD cover) and did a number of things apart from splitting a bemused audience right up the middle.

Firstly, it confirmed the renaissance of formerly mocked Texan Matthew McConaughey as he transformed from a shirtless rom-com hunk into a respectable actor. Secondly, it launched a thousand sound bites proclaiming the return to form of William Friedkin, once one of Hollywood’s leading directors (The Return of the ‘Kin, if you will). It’s the latter point that issue must be taken with since this comeback had actually taken place five years earlier, under very similar circumstances. The trouble is, when 2006’s Bug hit cinemas nobody seemed to notice.

Much like Killer Joe, Bug is a screen adaptation of a post-modern play by Tracy Letts and is a twisted character study that revolves around the power of dialogue and chemistry to power its intensity and rage. The very simplistic setup is at odds to Joe, however, as instead of featuring a noir-esque convoluted scheme it instead relies for the most part on the interactions between two inherently damaged individuals. Ashley Judd’s Agnes is a lonesome waitress approaching middle age while in hiding from her abusive ex-husband, tormented by countless cold calls to her Spartan apartment. She is introduced to a quiet and peculiar drifter, Michael Shannon’s polite yet intense Peter, by a friend and the pair strike up a quirky friendship that quickly progresses into an obsessive relationship.

The trouble is Peter is a paranoid fugitive fixated on Orwellian spying and conspiracy theories while Agnes, already traumatized by losing a child and suffering through an awful relationship with an ex-con, is easily fallible to Folie a Deux. Their delusions, reinforced by multiple problems that strengthen their singular bond, escalate into full-blown madness as they launch a war on a dubious bug infestation of their home and tear themselves apart in the process. Everything from the Bilderberg group to the Oklahoma City bombings is cited as the couple paints a canvass of sinister intent from faceless shadow men that is half terrifying manifestation of schizophrenic thought process and half epic exploration of fractured minds making sense of a perceived pattern of injustice against them.

Heavily dialogue-based, these monologues are simply extraordinary on the ear, even if they are hardly based on foundations of honest truth. Friedkin understands the material at hand perfectly, using his renowned yet subtle flair to create an atmosphere of claustrophobia and an underlying tone of tense anticipation but otherwise diverting all audience attention to the leads. Considering that Letts’ play is very static, using only three notable locations and based almost entirely around exchanges of dialogue, the potential impact of Bug is therefore left to hang around the shoulders of Ashley Judd and Michael Shannon, and this is the crux. Luckily, both are up to the challenge. In particular, it proves to be the making of Man of Steel’s Shannon, who is now firmly established as one of Hollywood’s most coveted properties. Introduced as a mono-syllabic and painfully shy presence who oozes awkward lack of confidence, he grows in self-belief through his bond with Judd’s Agnes, and eventually becomes a terrifying and assured presence. Despite his intensity and clear mental strains, he still retains an amiability that is crucial to making the piece something one can invest in.

But, bizarre as it sounds, it is Ashley Judd who sells the film. She is essentially this film’s McConaughey, in that she was a Hollywood name and an established actress, albeit one without much critical merit or acclaim as a leading lady. The ’90s made her a recognizable (and desirable) face through her supporting work in the likes of Heat and A Time to Kill (where, incidentally, she plays McConaughey’s wife), though attempts at carrying a film proved fruitless like in the aggressively average Double Jeopardy. Bug gives as an unglamorous Judd completely immersed in an uncomfortably challenging role and cracking into the full emotional range at a moment’s notice. It’s an absolutely superb, career-best, performance and one that were they any justice would have sparked a return to the big time in a far different guise. One can’t help recall Charlize Theron’s turn as Aileen Wuronos in Monster as a good frame of reference. Yes, she’s that good.

Another welcome surprise is the often maligned Harry Connick Jr. Enjoying the most screen time after Judd and Shannon as Jerry, Agnes’ recently incarcerated ex, Connick Jr resembles a hybrid of Hugh Jackman and Jeff Goldblum as the muscular and intimidating criminal, showing up at intervals to put the heat on a woman with whom he still has emotional links to exploit and producing such effortless menace that his mere presence is scene-defining. He is also handled wonderfully and unconventionally by Letts’ material, coming across as a genuinely scary poser rather than an actual villain. His only act of violence is an emotional reaction to hearing his lost son’s name, and all of his other nastiness is limited to emotional abuse and verbal bullying.

Notably, while happy to mock the weird Peter, Jerry never brings himself to raising a hand to him, serving two functions; ensuring a constant air of tension, a storm refusing to break and also revealing him to be a blowhard alpha male who recognizes that his latest enemy is best not directly challenged or provoked. Even when he’s keeping his temper down and retaining a veneer of politeness, Peter is still scary, unpredictable, and equally intimidating. The fight between him and Jerry is the great showdown that never happens. All of the violence, save one shocking moment in the climax, is directed by the leads against themselves, both by their horribly self-destructive behavior and in actual, grisly acts of punishment masquerading as a delusion-fuelled necessity.

The great horror in the story comes from that gradual, organic descent into a state of paranoia that becomes impossible to come back from. Sparked by a neurotic aphid hunt in Agnes’ bed, it eventually boils down to a set belief that the government and military are behind it all. It’s at these points, particularly in a stunning verbal tirade in the final ten minutes in which Agnes is fully converted, that Bug’s satirical edge is at its most clear. The power of suggestion, and the ability to create patterns out of unrelated events, results in some compelling and almost convincing theorizing that both mocks the cult of conspiracy theory and also sheds a light on why somebody could become an acolyte of the movement. While clearly a paranoid schizophrenic, Peter is also a charismatic and believable speaker, his verbal essays passionate and feasible.

Agnes falls under the spell, not because of ignorance or stupidity, but because she has suffered her entire life and is still haunted by a life-defining trauma that exists without purpose or explanation. She needs a reason, even if she has no closure, and Peter’s mad explanations provide that at last. The hint that the constant phone calls to her house, initially attributed to Jerry, are only in her head is a gateway into the unfixable damage caused by losing a child. Not knowing, and not knowing why, has left her confused, isolated and utterly alone. Peter’s arrival, damaging as it is, has given her everything she needs. It means that even when black comedy shines through the craziness, as it does in spades, there is also a heartbreaking edge to the drama that goes beyond exploitation shock tactics and oddball sensibilities. It’s no longer just pity you feel for the couple, Agnes in particular, it’s tearful sympathy. While it’s an intense thrill ride into madness, a satirical exploration of paranoia, Bug has at its heart a relatable account of the damage that grief can do, and what it can drive us to. This means that Bug provides ‘Fridge Horror’ in spades, the dawning sense of dread only discovered some time after the film has ended.

Its such complexity that puts the film on to another level, one that makes its status as a barely seen and barely loved play on wheels utterly illogical. The idea that the film fails because much of the madness comes across comically is flawed since it doesn’t understand that this was a fact known by both Letts and Friedkin. Like in their later collaboration Killer Joe, there is a great deal of incredibly dark and nasty funniness but it comes through serious interaction and events, rather than breaks in the natural rhythms to make reparations to an audience perhaps suffering in the moody humorlessness. When you laugh, it is out of incredulity and bafflement at events that are not stupid but simply twisted beyond reason. It’s entirely organic, a staple of Letts’ superb writing style that is high on neuroses and eccentricity while retaining a naturalistic sense of characterization. Friedkin, a dark visionary only too happy to toy with his audience, is the perfect director to put this across, as has now been proved twice over.

Sumptuously written and plotted and masterfully composed and presented, the pair provides the perfect stage for another couple. That duo, Judd and Shannon, are on fire. Ferocious and brilliant in execution and performance, Bug is a piece that provides so much, so many layers of entertainment and catharsis, that it simply has to be seen. As good as Killer Joe was, this is better, and is quite probably the most underrated film of the ’00s. Come for the craziness, stay for the complexity.

Steve McQueen’s Shame and the Depths of Sexual Addiction