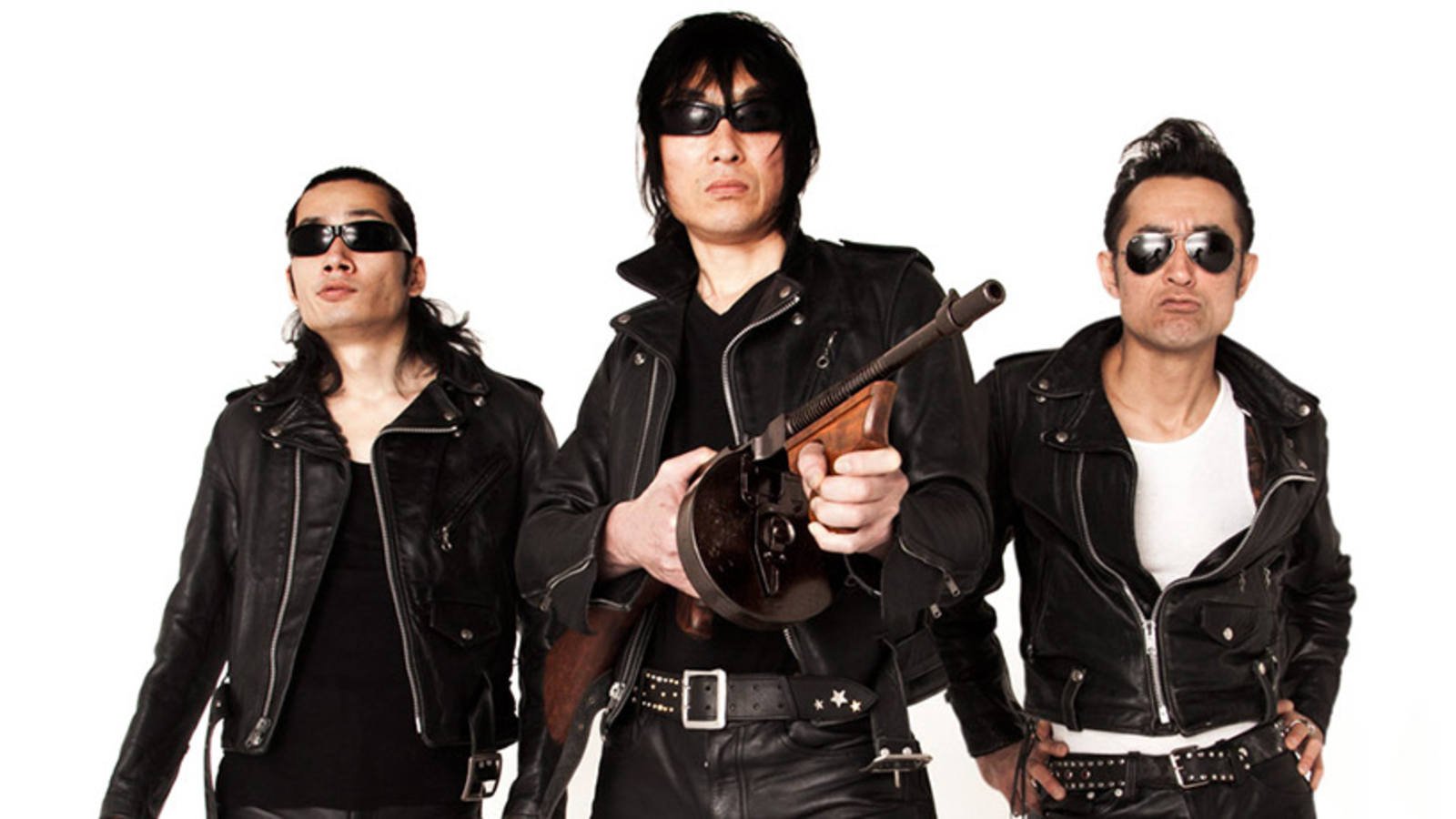 Get ready for the craziest punk-rock zombie flick you’ll ever see. Wild Zero makes absolutely no sense but somehow manages to get away scot free through sheer force of will. It stars a cult Japanese rock band, decked out in black leather and dark shades, who play their punk music at a high speed, high volume feverish pitch. The band in question is Guitar Wolf, consisting of three members: Bass Wolf, Drum Wolf and our groovy hero, Guitar Wolf, who never takes off his shades, and who’s musical instrument of choice doubles as a deadly energy sword used to fight off an alien mothership. The band wanders around dishing out words of wisdom like “Love has no borders, nationalities or genders” before taking off on their next adventure aboard powered motorcycles. Their biggest fan is a rock star wannabe named Ace (Masashi Endô), who inadvertently saves them during a stand-off with the band’s shady business manager. Ace and Guitar Wolf become best of buddies, and Ace is given a magic whistle which he can use to call for help whenever in need. Once aliens invade the earth and people start returning to life as flesh-eating zombies, Guitar Wolf, along with the power of rock’n’roll come to save the day. Motorcycles roar, heads explode and loud over-modulated punk rock tears through the film’s soundtrack. If The Ramones had decided to make a movie for Troma, the results might look similar to Wild Zero ( One of the first images in the film is, in fact, the Ramones album cover Subterranean Jungle). Think Rock And Roll High School crossed with Night of the Living Dead, crossed with The World’s End. Thrill, Speed, and Stupid Zombies” is the tagline, but Wild Zero offers so much more, including transgendered love, and fire-breathing motorbikes.

Helmed by noted counter-culture-video-director Takeuchi Tetsuro (known as Mr. MTV in Japan), this low-budget horror production starring non-professional actors was shot over a three-week period with an estimated budget of $50,000, and a small team of dedicated and talented computer effects artists by their side. The zombie extras in the film are a treat to watch – with the Thai military and their families standing, and staggering, in for the walking dead. You haven’t seen strange until you’ve seen Wild Zero; this exuberantly silly Japanese punk trash flick, reportedly made with a cast and crew who drank themselves silly while on set, will leave you staring in amazement. Guitar Wolf, returning to the big screen two years after their tenure in The Sore Losers, are a blast to watch. The action rarely stops, until that is, all the characters meet in a shed and give a history lesson on George A. Romero’s masterpiece Night of the Living Dead. Wild Zero is dumb fun, free-spirited, and downright belongs in a class of its own. Essential viewing for the midnight crowd, or anyone who likes to have fun. Brian De Palma’s ‘Carrie’ is Nothing Short of Brilliant