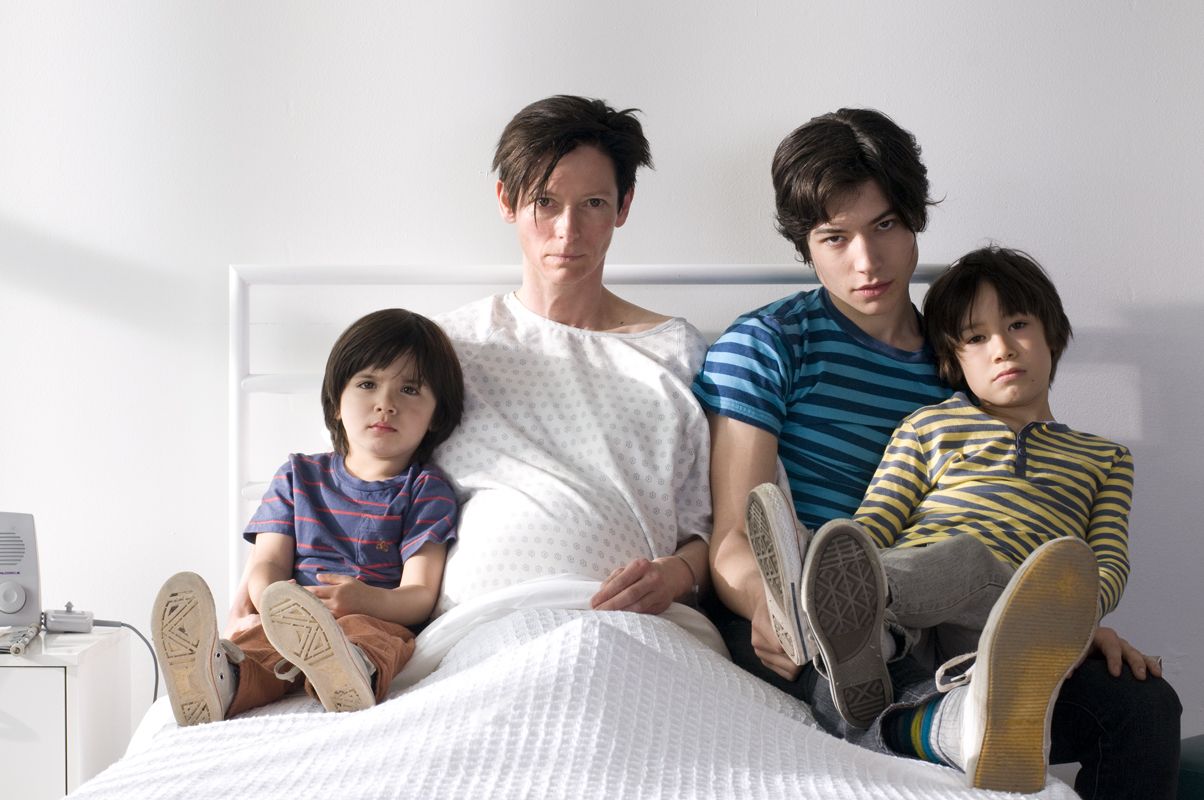 Based on the book by Lionel Shriver, We Need to Talk About Kevin paints an evocative portrait of Eva, who’s suffering through a deep post-traumatic shock after her son, Kevin, commits a horrendous crime. Terrorized by members of the community ever since the terrible tragedy, she becomes increasingly paranoid, ashamed, and deeply depressed. Early on in the film, two young Mormon boys arrive at her front door to discuss the afterlife. Eva looks them deep in the eyes and tells them simply: “I’m going straight to hell.”

That sentiment describes Lynne Ramsay’s controversial feature, her first in nine years ever since her brilliant and overlooked Morvern Callar. We Need to Talk about Kevin comes across best as a bad parenting / bad-seed horror movie, and if you would like to classify it as such, it might just be the best genre film of 2011.

Kevin himself is over the top, cartoonish, and seemingly born bad; he seems lifted from the pages of the latest Stephen King novel. Many critics have criticized the film for the character’s portrayal, but they seem to be missing the point. We Need To Talk About Kevin is all about perception – in this case, in how Eva perceives the world, how she regards her son, and how she views situations in her past. Notice how Kevin only shows his true colours when he and his mom are alone together. When anyone else is present the boy appears to be an innocent. One would assume the movie is about its titular character, but the movie really isn’t about Kevin at all. It’s about Swinton’s Eva, her guilt, regret, and loss; therefore the movie largely takes place in her tormented mind.

It becomes clear in Eva’s mind that she feels an immense amount of guilt for the actions of her son but tries to also convince herself that he was just born that way, evil from birth, but was he? We Need To Talk About Kevin is the type of film that is bound to raise debate about nature versus upbringing, but again this is not the point of the film.

Ramsay’s direction is confident and composed. The actual massacre is wisely kept mostly offscreen and instead recalled through a reoccurring motif of the colour red that filters through the picture’s veins for its entire running time: from the unforgettable opening at a Spanish festival where a crowd of people drowns themselves with tomato viscera to the red paint splattered on her house by vandals, which Eva spends her days scrubbing away at. Red is everywhere in sight: in food, traffic lights, makeup, clothing, and much more. The colour design here alluding to the tragedy buried deep in Eva’s soul. Rather than conflicting with its dark subject matter, the film’s visual beauty instead punctuates the horror.

Ramsay with the help of editor Joe Bini (best known for his work with Werner Herzog) commits to a time-shifting narrative from start to finish – juxtaposing thematic links between the past and present. To this end, she embraces the use of montage, cutting heavily between various shots to capture Eva’s perceptions of events past. Her Mise en scène is, at the outset, nothing short of exhilarating. Eva is present in every frame of the movie, yet Ramsay shoots in Cinemascope, so no matter how close she gets, Kevin isn’t far behind. The sound design and score by legendary guitarist and composer Johnny Greenwood, are near perfect, evoking unease, and an overall physiological effect. As with all her films, Ramsay selects a cool cerebral playlist, ranging from the Beach Boys to Leadbelly’s “Ham and Eggs” and the vintage country song, “Mule Skinner Blues.”

On camera every minute, Tilda Swinton gives a tour-de-force performance, effortlessly conveying every thought racing through her character’s mind. It is a true work of art; regardless of its mass reception, and maybe Ramsay’s best to date.

10 Years Later: The American and Visions of Damnation

The Intruder— the Killer Snake Movie Nobody Watched