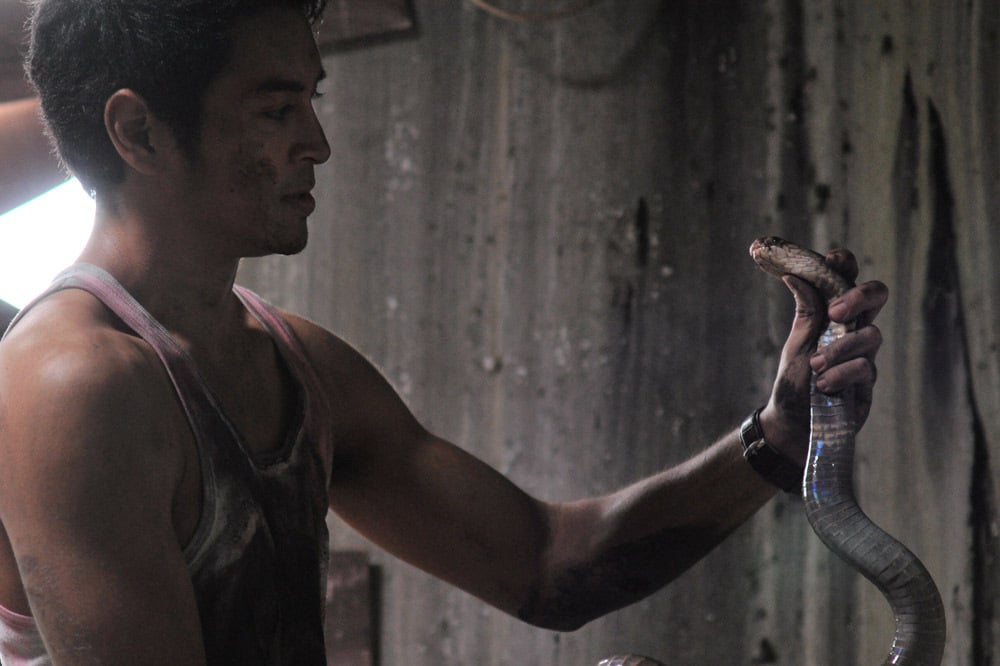 The Intruder Hardly Delivers on its Promise of Reptilian Fun

Unfortunately, neither undiscriminating genre fans nor connoisseurs of high camp will find much bite in The Intruder, a snake-based horror film about killer snakes who invade an apartment complex without any rhyme or reason. Of course, there are theories of why the snakes attack – something to do with a huge old Banyan tree ripped from a Cobra graveyard by a construction crew and some urban legend about the Corba spirits returning for revenge, but nothing definitive, or unfamiliar, for that matter.

The film hardly delivers on its promise of reptilian fun, and suffers from a fatal lack of character development and plot. The script, by first-time directors Thanadol Nualsuth and Thammanoon Sakulboonthanom (who previously served as assistant directors on Poj’s transvestite-ghost comedy Hor Taew Taek and the gay-teen soccer comedy Sassy Players), doesn’t waste any time with the cobra invasion – and why should it? Nobody watches Anaconda or Snakes On A Plane expecting a clever script. But the problem with The Intruder is that as the picture rattles along it also becomes incredibly redundant and extremely boring.

The Intruder suffers from one-dimensional characters, introduced quickly to simply die. These characters have hardly any backstories and what little we are given is fleshed out somewhere between meals. Hell, the digital reptiles have more depth than the people, but again, that’s not even the problem. The film takes itself too seriously, never displaying the slightest hint of self-awareness, and doesn’t even elicit laughs unintentionally. The survivors are narrowed down to a small group that tries to stay one step ahead of the snakes, and we’re treated to 90 minutes of chase scenes up and down the building, up and down in the lifts, up and down the hallways, and up and down the elevators. The cinematography consists mostly of flickering hallway lights (you would think the landlord needs to pay his electricity bill) and the film includes one of the laziest movie scores in recent memory. The score is so unoriginal it even ends with a desperate adaptation of “Lux Aeterna,” Clint Mansell’s main composition for Requiem For A Dream.

It’s also not scary. The serpents, albeit impressive creatures (apparently some of them actually real) are not enough. The set-ups for each snake attack are so blatantly telegraphed that there’s little tension. Instead of inspiring fear, we end up tolerating the constant shouting between each character as they selfishly argue amongst each other to try and survive. Had the duo directing team aimed at delivering a camp b-movie, The Intruder might have been enjoyable to some degree, but Nualsuth and Sakulboonthanom try too hard to evoke an emotional response from the audience each time a cast member is killed off. Even worse, the film is bookended with a preachy moralistic lesson about karma.

We Need to Talk About Kevin— a Beautifully Rendered Hell