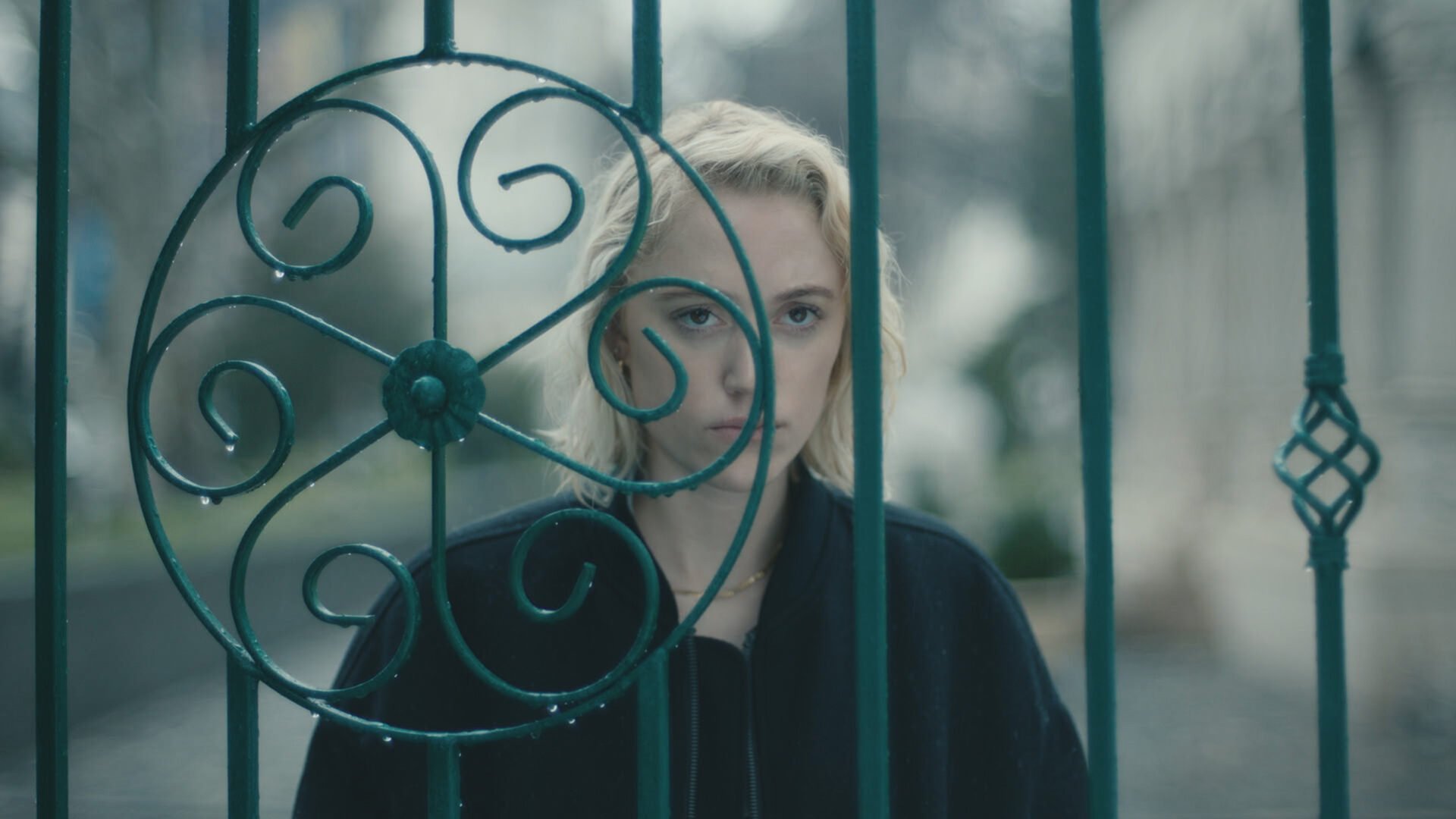 With layers upon layers of paranoid tension that reflects its protagonist’s increasingly distraught mind, Chloe Okuno’s feature directorial debut does all it can to overcome its most glaring problem: a screenplay that does nothing new and relies heavily on dated tropes. Watcher is an exercise in atmosphere that circles familiar territory while still providing an excellent showcase for its talent both behind and in front of the camera. An unknown environment and unknown intentions build mystery in an otherwise pedestrian psychological thriller.

Maika Monroe (It Follows, The Guest) stars as Julia, a former actress who joins her husband, Francis (Karl Glusman), as he moves back to his native Romania for work. In a place where she doesn’t speak the language and is trying to reevaluate her career, Julia finds herself alone during the days and increasingly paranoid that her neighbor across the street (played with a quiet menace by Burn Gorman) is following her. As her suspicions are exacerbated by further evidence, she finds herself isolated from the rest of the world with only her fear to keep her company.

Unfortunately, everyone has heard a variation on this plot before, most notably with Rear Window as even Julia spends time just staring out of her window watching the man across the street watch her. There’s hardly any subversion, except for the faintest attempts that quickly find themselves ignored in lieu of a more traditional plot. The character work is hardly there, all done in broad strokes and aided by typical tropes expected of this type of film: gaslighting and gender power dynamics.

Julia’s loneliness in the situation isn’t helped by anyone except Irina (Madalina Anea), her next-door neighbor who is the only person who understands the frequent terror women feel when alone. Unfortunately, even that relationship is barely explored, with most of the focus placed on mounting tension and capturing Julia’s fragile state. Each plot point is a known quantity, done better somewhere else, but Okuno knows how to create an atmosphere that puts the audience directly into someone’s headspace. It’s the saving grace of the film.

Monroe is the other piece to the puzzle that keeps Watcher from devolving into complete tedium. It’s a perfect role for someone who has already proven herself in the indie horror scene, but her performance as someone in a foreign land that’s unsure of what is real or not is the kind of unhinged performance that many directors would hang their hat on. Having Burn Gorman opposite her as the stalker is icing on the cake, as he is another one of those actors who has always delivered but not quite in a role this terrifying.

It’s too bad that Watcher’s screenplay is predictable with characters written so one-note that it’s a miracle everything else comes together as neatly as it does. It’s a gorgeous looking film, utilizing its foreign setting for a combination of sleazy, frightening locations and beautiful European streets. Benjamin Kirk Nielsen frames every shot like someone is watching, leaning into the voyeuristic nature of the film which is amplified by Nathan Halpern’s wonderfully eerie score.

By the time Watcher ends it has already thrown away any goodwill it had built in its technical merits. Monroe’s performance is staggering, but it’s also in service of a poorly fleshed out character; one whose autonomy in a situation is ignored until the film’s climax. Okuno proves herself as capable of working wonders with even the most run-of-the-mill screenplay, but unfortunately it’s a film where most will move on with their lives or put it on as background noise once they discover its unoriginality.

Volcanoes and Romance Erupt in the Poetic Fire of Love

Speak No Evil is an Unpleasant Family Getaway