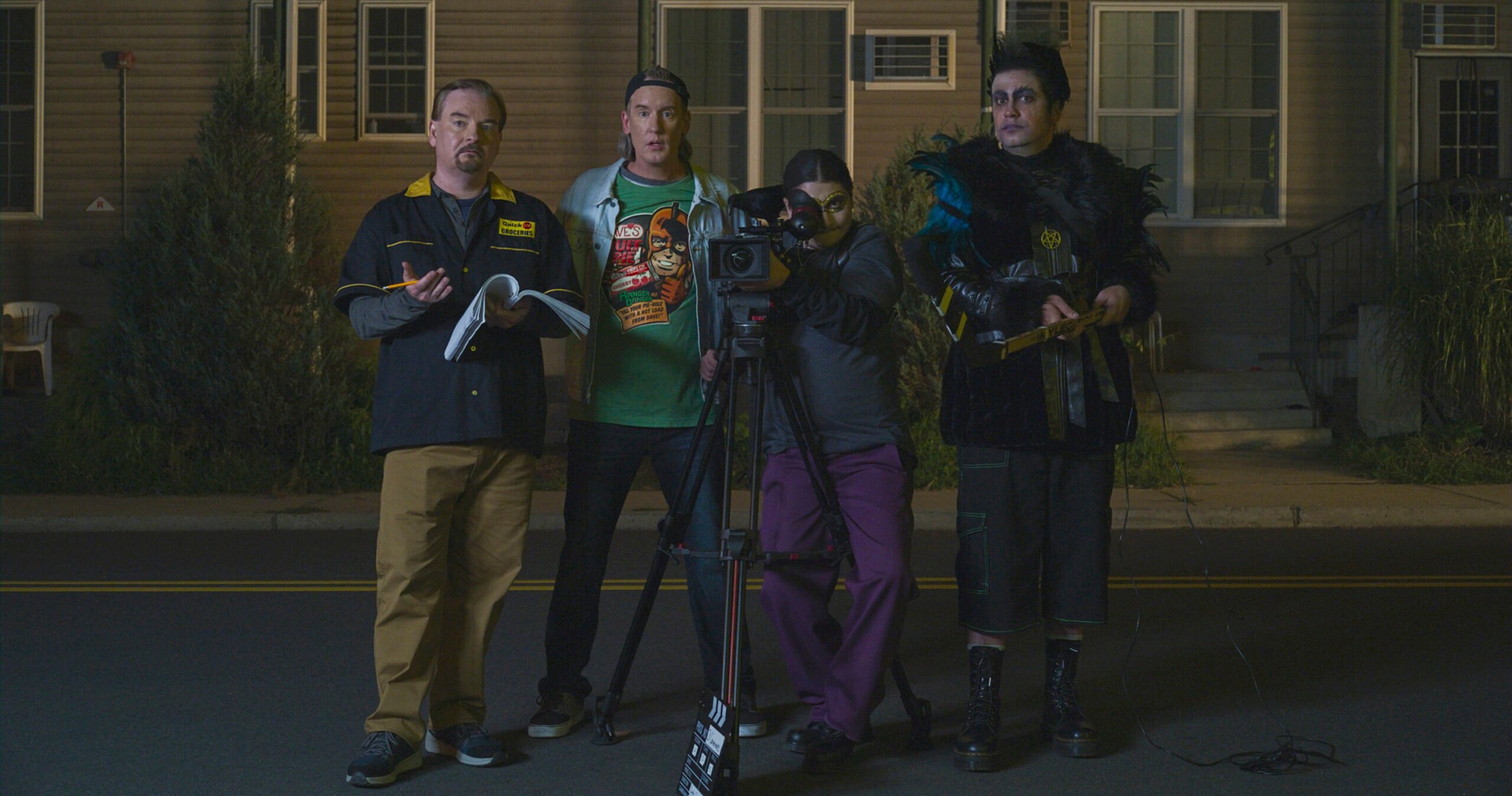 In recent years, Kevin Smith’s filmmaking has retreated into a seemingly endless series of references and callbacks to his earlier work. His last film, 2019’s Jay and Silent Bob Reboot, applied that treatment to, essentially, all of the characters he has ever created, providing fan service to his die-hards, the kind of people who remember, two decades later, all of the specific plot beats of 2001’s Jay and Silent Strike Back.

Now, Smith has taken that filmmaking approach to a new nadir with Clerks III, a second sequel to Smith’s much-celebrated 1994 debut, which once again places Dante and Randall (Brian O’Halloran and Jeff Anderson) at the QuickStop for nearly the entire movie. Except now, the characters are in their 50s instead of their 20s.

The new movie, and I can’t stress this enough, is nothing but two hours of endless fan service, even to a degree past what Smith usually does. Every story beat, and nearly every line, is meant as a reference, callback, or in-joke related to the original Clerks, and occasionally one of Smith’s other projects. The problem is, it treats recognition as humor in and of itself because beyond that, it’s got nothing. This film is almost entirely laugh-free.

The original 1994 Clerks was a riotously funny film. But not only that, it was something new. Movies that look and feel like Clerks — in black and white, with a super-low budget, barely professional actors, and unthinkable levels of raunch — just didn’t come to theaters before that. Clerks III, on the other hand, arrives nearly 30 years later and is nothing but things we’ve seen before.

The film follows up the fitfully funny Clerks II, from 2006, which ended with Dante running off with Rosario Dawson and, along with Randall, buying the QuickStop. As the third film opens, Dante is still reeling from a personal tragedy, while a series of unlikely events leads Randall to decide to… make a movie about a day in the life of the convenience store.

Without saying too much, it’s clear that Smith’s heart attack a few years ago, and the feelings of mortality that came along with it, are still weighing heavily on him.

But, we already know that, because Smith has told the story numerous times before on his podcasts and live shows- which, has been the case for a while now, are much more interesting than his current movies. Meanwhile, anyone seeing the film likely knows the story of the making of Clerks backward and forwards- why rehash that again?

It’s just remarkable how unfunny this all is. Where’s the wit, that shocked us all back in 1994?

The script’s one and only good idea is that Jay and Silent Bob are now legal cannabis entrepreneurs, and with the adjacent video store, of course, closed, they’ve set up shop there. But the idea gets just about no follow-through.

However, the Jay and Silent Bob material is a picnic compared to what the film does with Elias (Trevor Fehrman), who was about a C-minus character as a sidekick in Clerks II, but is just deathly here, as he’s switched for some reason from an annoying Christian into an annoying Satanist.  And the less said about the incongruous crypto subplot, the better.

That O’Halloran and Anderson were regular guys was part of the charm of the original film- but let’s just say that neither of them is up to the level of dramatic acting that Clerks III demands of them. And Fehrman is getting his first movie credit since Clerks II, 16 years ago.

Sure, it’s good to see Veronica (played by the now 60-year-old Marilyn Ghigliotti), although there’s no reference to Caitlin (played by Lisa Spoonauer, who died a few years ago.)

Clerks III is being released with a unique, week-long schedule through Lionsgate and Fathom Events, and while Smith has long shunned critics, the film was shown to the press almost a month in advance. Even so, this film is unlikely to appeal to anyone but the hardest of Kevin Smith die-hards.

Honk for Jesus. Save Your Soul. Is a Stunning Portrait of Internalized Homophobia