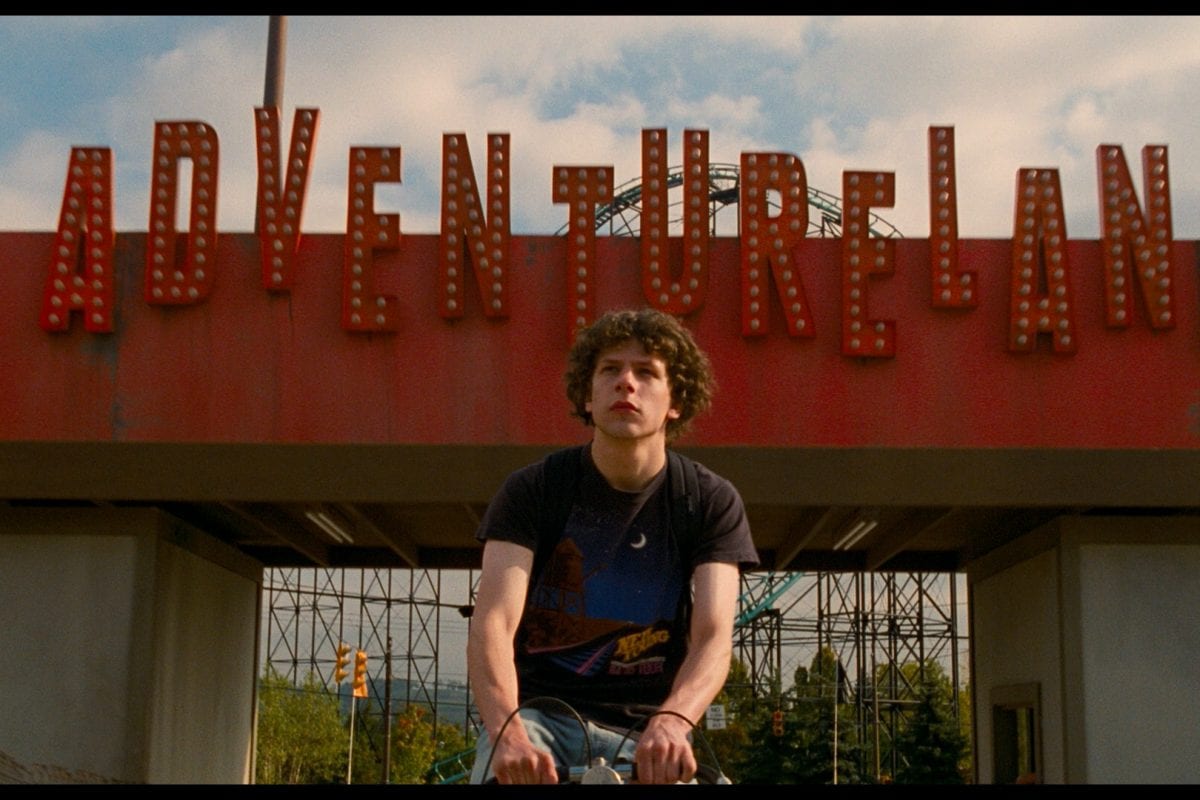 Based on his own real-life experience working summers at an amusement park in Long Island, NY, Greg Mottola’s follow-up to his sleeper hit Superbad is a poignant and touching male coming-of-age film with sharp dialogue and a surprisingly well-developed female lead character. And while it is deeply funny, fans of Superbad expecting another potty-mouthed gross-out comedy will likely be disappointed.

James Brennan (Jesse Eisenberg) is your typical upper-middle-class college grad, prepping for the requisite summer jaunt through Europe before heading to NY to study journalism at Columbia. But his yuppie dreams are dashed when money troubles hit his family and he is forced to take the only job he is actually qualified for at the local amusement park. Initially loathing his working-class fate, James slowly grows accustomed to his new surroundings, befriending fellow midway staffer Joel (Martin Starr) and developing a major crush on resident tough cookie Em (Kirstin Stewart).

The park itself seems to mirror the listless rut that James and many of the other employees seem stuck in. The games James is charged with operating are rigged and an amusing running gag involves the park’s owner/manager Bobby (Bill Hader) continually berating customers for failing to deposit their trash in the awkwardly shaped clown heads that adorn the garbage cans. But there are those who seem strangely at home amongst the dilapidated rides, like as resident hottie Lisa P (Margarita Levieva) and hot-shit handyman Mike Connell (Ryan Reynolds) whose claim to fame is that he once jammed with Lou Reid.

Set in 1987, the film makes great use of its retro setting with a soundtrack that oscillates from the obnoxious (“Rock Me Amadeus”) to the sublime (“Husker Du”). And while the film is rife with nostalgia, it is more for the post-adolescent angst commonly referred to as a “quarter-life crisis” than any particular decade. The dialogue and character arcs are shockingly realistic and while Eisenberg is suitably likeable and neurotic, the real stand-out is Stewart who proved that she deserves to have a fulfilling career after Twilight. That Mottola was able to create a love interest that is both so fragile and strong is one of the true strengths of the film and allows it to operate well above the level of your standard summer romance.

The film is filled with great supporting performances, including the always Hader and Kirstin Wiig as the park’s owners and a loveably bitter turn by Martin Starr. The only real weakness is a rather pat ending, complete with a rain-soaked reunion, but the way the storyline is tied up makes sense for the characters, especially considering how much the audience has likely grown attached to them.

Considering the level of talent on display, the film’s ability to capture an audience is sadly in question. Miramax seems determined to try to sell the film as another Apatow-esque juvenile romp, going so far as to release a “red band” trailer online. While the film has its share of laughs, supplied not only by SNL alums Hader and Wiig but equally well by Eisenberg and Starr, the film is of a much dryer wit than Mottola’s preview effort. However, for fans of quiet, thoughtful, and personal films, Adventureland is

Weird: The Al Yankovic Story is a Wild, What-if Tale of the Pop Star

Tiresome Clerks III is a Rehash of a Rehash