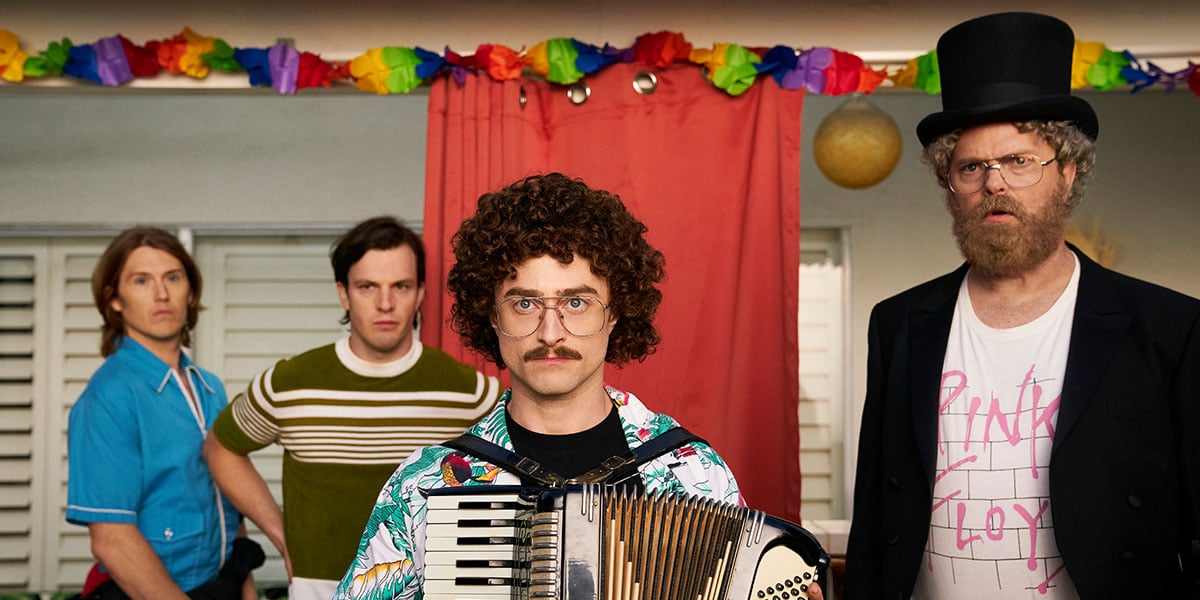 What’s really fascinating about Weird: The Al Yankovic story, the new biopic of the famous song parodist that premiered at the Toronto International Film Festival, is that if it had been a straightforward telling of Yankovic’s life, it still could have been quite good.

Weird Al’s arc, after all — a song parodist, utilizing the polka tradition and the accordion, who has gone on to remain famous for going on 40 years now — is unlike any other in the history of popular music, while he’s also managed to stay one of America’s only universally beloved celebrities for all of that time. . It could have used that moment in 2014, when Yankovic was told he had achieved his first-ever #1 album, as an emotional climax.

Weird, which will debut in early November on the Roku Channel, is not a conventional music biopic. Nor is it a point-for-point evisceration of the music biopic genre, a la Walk Hard: The Dewey Cox story, which was a concern from the movie’s trailers.

Instead, Weird is a highly unconventional biopic, in the sense that just about nothing in it is true. It’s still, however, consistently hilarious, and a worthy addition to the Weird Al legend. Weird is based on a decade-old Funny or Die bit, which is why Funny or Die has prominent placement in the credits despite not having much of a footprint anymore.

The film tells us that Yankovic’s parents (Toby Huss and Julianne Nicholson) were violently opposed to his becoming a musician, playing the accordion, or being “weird” in general (in real life, they were rather supportive; Yankovic really was encouraged to play the accordion by a traveling salesman but was not then met by a horrific beating from his father.

In addition, Yankovic was not the number one star on Earth in the 1980s, did not have a torrid love affair with Madonna, did not have run-ins with Colombian drug lord Pablo Escobar, did not commit several murders throughout the 1980s, and did not write “Eat It” before Michael Jackson made “Beat It.” And Al did not have a brief period when he acted like a diva, drank heavily, and got arrested in Miami like Jim Morrison.

Eventually, we catch on to what the movie is doing, and it’s frequently very funny. The film was directed by Eric Appel, a TV director, and Funny or Die hand, and Yankovic co-wrote it. There’s a touch of the sensibility of UHF, Yankovic’s best-known movie, especially in finding incongruous humor in Weird Al touting a machine gun; the gag-a-minute ethos of The Naked Gun movies, in which Yankovic used to cameo, is also a clear influence, even before the goofy closing credits.

Radcliffe is believable as the 1980s incarnation of Weird Al, sporting the mustache and curly hair, and nailing the voice both in speaking and singing. But Evan Rachel Wood practically steals the film from under him a parody of Madonna’s “Like a Virgin”-era self, albeit presented as somewhat diabolical and evil. Rainn Wilson does a convincing turn as weirdo radio host Dr. Demento.

There are also practically endless cameos from members of the alt-comedy world, especially at a Boogie Nights-style pool party in which Weird Al is introduced to the celebrity world.

Sure, not every gag lands. A drug trip sequence is a dud, which it has in common with just about every drug trip sequence in every movie besides Easy Rider. And I fully grant that watching the movie in the conditions I did, in a roomful of obvious Weird Al fans who clapped along with every song, might not make the movie land the way it will for those who watch it on The Roku Channel in November.

Even so, it’s hard to imagine any Weird Al fan not having a blast with Weird.

Patrick and the Whale Tepidly Dives Below the Surface