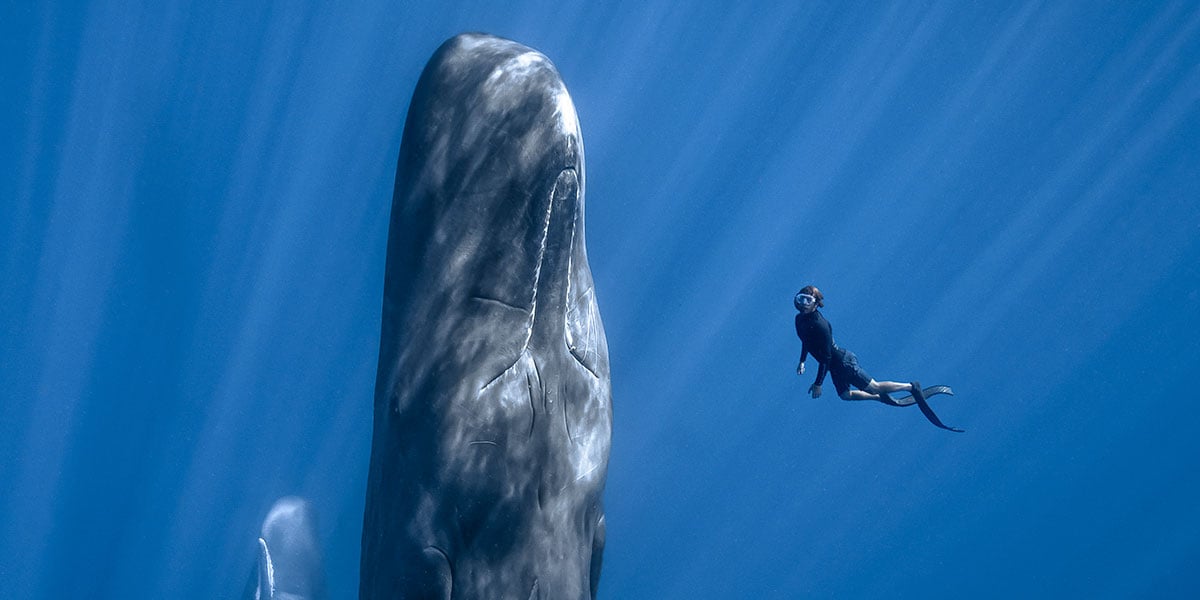 TIFF 2022: Patrick and the Whale Review

The ocean’s vast expanses and varied ecosystems continue to offer mysteries for humans to solve as we pride ourselves on the pursuit of knowledge. However, the drive to discover why something is the way it is can often lead to frustration as the answers require an emotional connection that is just too difficult to force. That desire to know more about something, specifically because of how it speaks to you on a personal level, is what pulls marine videographer Patrick Dykstra towards the world of whales. In Mark Fletcher’s Patrick and the Whale, a connection and a thirst for understanding thread together impressive footage of various species of whales – with the acknowledgment that there’s so much more below the surface.

Patrick has spent his childhood in awe of whales, and while it’s not the cheapest hobby to have, something about these massive mammals lures him into the water on a regular basis. Many spend their lives simply hoping to catch a glimpse of whales off the coasts of islands and along excursions through the ocean, but Patrick’s obsession has led to an impressive collection of detailed footage showing all sorts of whales – from humpback whales to killer whales – but it’s through a chance encounter with one particular sperm whale which he calls “Dolores” that Patrick finds himself endlessly fascinated by the beauty of one of the ocean’s largest creatures.

Questions arise throughout Patrick and the Whale that can be universally applied to many species: what exactly makes these animals behave the way they do? An early moment of horror as Patrick stumbles upon a beach lined with whales underpins a consideration of the bonds that bring not one, but multiple whales to their untimely death. It’s a launching pad for further exploration into the world of whales, but the answers can’t be found simply by following along with whales during migration patterns and fleeting moments that bring them to the surface.

This is where Fletcher’s documentary shines above its pursuit of knowledge as it presents some of the most detailed, awe-inspiring footage of whales that it helps translate Patrick’s own obsession to the audience. Mostly fixated on sperm whales, the footage here is incredibly up-close and an overlay of Patrick’s own questions and comments on the wonder of whales only furthers the majestic qualities of the species. Huge, towering pelagic mammals swim past Patrick as he attempts to solve the problem of finding footage beyond what’s readily available, there’s a beauty to the scale presented that can’t help but make a human’s presence in the ocean feel insignificant.

However, how Patrick and the Whale centers around the growing relationship between Dolores and Patrick end up leaving the film a bit undercooked. It never quite feels as tight of a relationship as Patrick’s excitement suggests, and the film eventually veers into following other whales in its quest for understanding which further takes the wind out of its sails. The thread tying the entirety of the film together feels more like Patrick’s obsession, but it doesn’t really explore that beyond a few significant encounters and a detour to try and get more footage. It’s a film where Patrick’s relationship with whales feels more like the centerpiece but just as he knows very little of what goes on in the minds of whales, we know just as much about his life.

There’s no denying though that the allure of Patrick and the Whale is its impressive footage, which takes every fiber of being not to be staggered by. Revelations made from Patrick’s research fuel an emotional undercurrent that helps make the journey alongside him worth it, but it’s hard not to be slightly underwhelmed by the relationship that seems to ignite the questions at the foundation of the documentary. It speaks to how easily humans can be completely overcome by a single moment, but by attempting to extend that moment and subsequently pull away from it strips the throughline of its momentum. Patrick and the Whale is a gorgeous nature documentary that just fails to be much more than a collection of factoids and awesome footage.

Weird: The Al Yankovic Story is a Wild, What-if Tale of the Pop Star