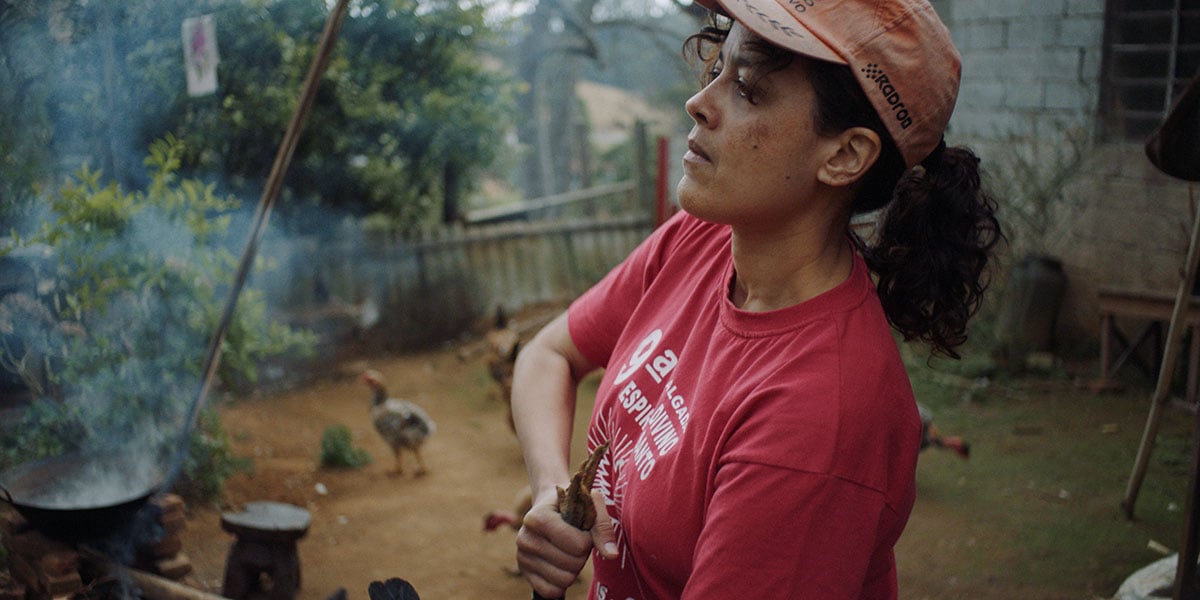 There’s a mystery surrounding the outskirts of São Paulo in the countryside where everyone knows everything, and suspicions are easily accumulated when anything different slips through the cracks. In the case of Carolina Markowicz’s feature-film debut, CHARCOAL, something very different begins reshaping a family in mourning as their lives are upended by the arrival of a wanted drug lord using their home as a temporary hideout. With many smaller threads sprawling out from its central narrative, Markowicz illustrates a world of exploitation and discomfort where some manage to thrive despite their circumstances.

When Irene’s (Maeve Jinkings) father’s condition fails to improve, she accepts the fact that the man she has nurses coming to replace oxygen tanks for is likely trapped in a perpetual state of suffering. While God and the law may not approve of ending his suffering prematurely, one of the nurses offers a proposition: she’ll help end Irene’s father’s misery if she agrees to house an Argentinian drug kingpin who needs to disappear. A temporary arrangement that soon seems to have an unknown end date, Irene reluctantly accepts the deal and opens her home to Miguel (César Bordón), whose presence begins prying at the life she’s built with her husband, Jairo (Rômulo Braga), and their son, Jean (Jean de Almeida Costa).

The matriarch of the family and the one holding everything together, Irene stands out immediately in CHARCOAL as a strong support system that rarely has her own needs addressed. Miguel’s arrival isn’t just an opportunity to make some extra money – it’s a chance to have some excitement in her life. However, Miguel’s distaste for Irene and his living arrangements creates a rift between her and the drug lord. Hostility runs rampant throughout CHARCOAL and it’s obvious that things will come to a head sooner than later.

It’s through the eyes of Jean that the changes within the household become most apparent. Now suddenly flush with cash where he can buy his friends chocolate and soda on their breaks, and less interested in homework than he is in observing their new houseguest, Jean is at an impressionable age. While his mother spends the day at home cooking and taking care of the house, his father seems to spend most of his time out drinking or simply absent – despite needing to make ends meet due to the charcoal factory they depend on winding down its operations for the year. Jean isn’t just an audience surrogate though, his character is impacted by every element of the world Markowicz presents in CHARCOAL.

Very few moments in CHARCOAL appear superfluous at the time. Smaller plotlines spiral out from the arrival of Miguel and relationship dynamics change incrementally over time. Each one gradually bleeds back into the main plot so that the culmination of each character arc is noticeably strengthened by the joint experience of housing a kingpin. It doesn’t leave a lasting impression on the audience though, with the film’s ending feeling abrupt despite the gradual build towards it. There’s a lack of set-up to its conclusion and when it decides it’s going to come to an end, it’s a surprise as opposed to an expectation.

There’s a tonal issue that frequently surfaces throughout CHARCOAL as it tries to inject humor in a fairly humorless scenario. There are some darkly comedic moments that do work in the moment, but it’s very sporadic and acts as the foundation to being a little cheekier with its ending. The characters are all playful to an extent but still exist within a harsh reality, including Miguel who is blindsided by his accommodations in a rural home instead of something more luxurious. The tonal incongruities never fully align and it’s hard to really get a grasp on many of the characters except for Jean – the one character who has the most noticeable metamorphosis – making it doubly difficult to understand tonal inconsistencies.

It’s the way Markowicz explores those less fortunate being exploited that gives CHARCOAL its power. Taking a kingpin and forcing him to abide by a rural family’s rules knocks him down a peg while also giving power to Irene and her family. How much power does she really have in this situation though when it’s all under the agreement of a deal proposed by someone else? Yes, the family has made a little more money, but will the impact of Miguel’s presence cause irreparable damage to their family’s relationship and especially, the impressionable Jean? These questions are often festering in the background of CHARCOAL as the family tries to maintain a semblance of normalcy.

CHARCOAL paints a portrait of a family trying to make ends meet with the circumstances provided to them. The disparity between a criminal and those trying to live an honest life is apparent from the beginning of Markowicz’s debut, highlighted more when that disparity finds itself under the same roof. Power dynamics shift around and lead to clashes within the household, but Markowicz is fully aware of who believes they hold the most power in the situation and mines that to create further tension.

Despite sturdy performances from its cast, CHARCOAL’s biggest fault is that it never lets the characters exist outside of their current experience. They feel inexplicably tied to Miguel’s existence and the few times that a character like Jairo seems to have something worth exploring, Markowicz doubles back and drops the plotline completely. If it is not impacted by Miguel’s presence, it cannot be lived at the same time. When this happens, it results in more in frustration than understanding as the screenplay fleshes out a more expansive network of characters but never seems interested in exploring it – ultimately leaving CHARCOAL with a muted impression despite the tumultuous events that lead up to it.

I Like Movies Tells the Surprising Story of a Fanboy

Patrick and the Whale Tepidly Dives Below the Surface