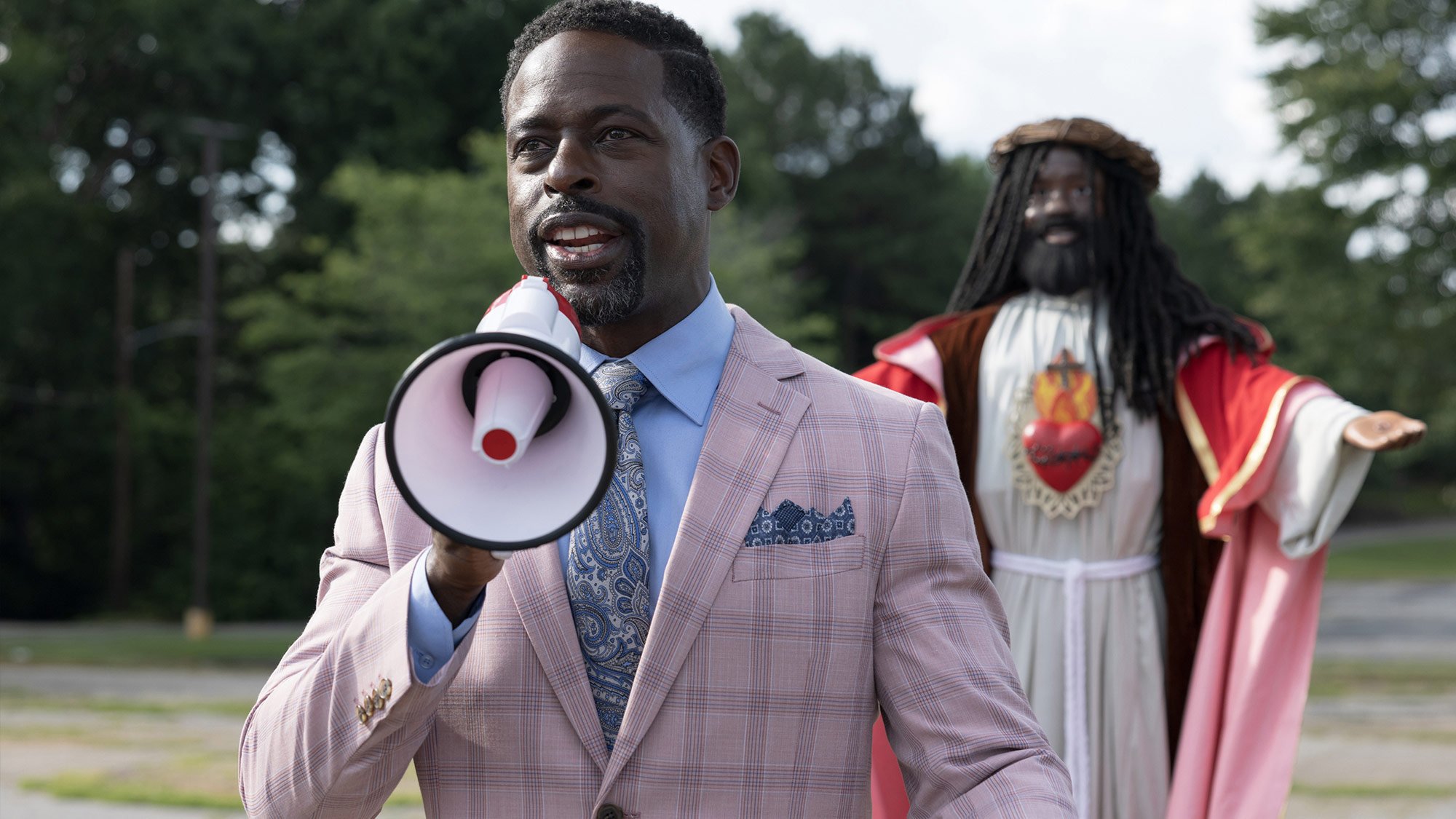 Honk for Jesus. Save Your Soul. follows married couple Pastor Lee-Curtis (Sterling K. Brown) and his First Lady Trinitie Childs (Regina Hall) as they are filmed by a documentary crew in the weeks leading up to the reopening of their church after a scandal. At first, we don’t know what the scandal is, only that there are “sexual misconduct allegations” against the pastor, and that it resulted in the “mass exodus” of all but five of its twenty-five thousand congregants. Not five thousand; literally five individual people.

The playful first half of the film leads us to believe that perhaps this biting satire of mega-church pastors and prosperity-gospel culture will allow us a reprieve from the heavy scandals we see in the news. The film briefly informs us that the pastor broke no laws, and that though there are rumours of settlement pay-offs, no criminal charges are pending; It’s easy to fall into the belief that perhaps this film will provide us the pleasure of shining a light on the ridiculousness of mega-churches without having to directly face the dark nature of the disgrace and damage the church has done. That’s only partly true. Because the scandal isn’t what we expect.

Lee-Curtis’ transgressions aren’t technically illegal because they were extramarital relationships with other legal adults (nineteen- and twenty-year-olds in his church) but it is unethical and problematic to have affairs with your congregants, especially troubling for someone whose identity is shaped around being the moral center of the community. The twist —that its young men Lee-Curtis were involved with— weighs down the experience of watching the film, especially for its queer viewers, for several reasons: The first being that the reveal comes out of left field —one minute we’re laughing, and the next, we’re watching the painful solemn truth unravel before our eyes. The tremendous sadness that comes across in Brown’s outstanding performance in that scene (when the mood shifts swiftly from Comedy to Drama) means we never quite enjoy the jokes that come after in the same way; Perhaps that’s intentional. The second reason it’s a difficult watch is that Honk for Jesus seems to treat Lee-Curtis’ queerness with the same quiet homophobia that his conservative local community does.

Let’s start with where Honk for Jesus delivered on what we expected: The extravagant church building with indoor fountains, a pastor who boasts about his Bugatti on stage, worship services with laser lights, and green-screen backgrounds of The Last Supper. The dramatic colours and textures in each carefully chosen outfit the couple wears (and their walk-in wardrobe on the church premises!) convey the importance of a very specific outward appearance. The film also champions a brazen depiction of the power imbalance within church-based Christian marriages, especially the social pressure coming from inside its own community. Those who came to Honk for Jesus for a genuine parody of the harmful hypocrisy that runs deep in the church will be surprised and impressed with how boldly it tells its story.

Sterling K. Brown’s performance as Lee-Curtis is radiant; from his sparkling eyes in VHS tapes of his past sermons to his enthusiastic awkwardness in the present day. Regina Hall continues to be a remarkable comedic talent, unmistakable in her airy preacher’s-wife voice as Trinitie, whose entire soul we witness sinking in disappointment with just a minute shift in her facial expression.

Top-tier humour is used to explore Lee-Curtis’ character; He fiercely announces to the camera that he got rid of the deacons in his church who questioned the excessive “divine additions” of Prada suits and jets: “Because what good are disciples if they are undisciplined?” The film also explores the potential silliness inherent in religious practices: After a hilarious scene where Trinitie holds Lee-Curtis underwater for far too long during a baptism, they argue about whether they’ll say ‘Ah-men or ay-men’ at the end of their prayer (“All the people that’s hot and popping on the internet, they say the ay-men, Lee-Curtis argues.”)

Honk for Jesus markets itself as the story of a Black woman helping her husband revive the church they lead, but the heart of this story is really her husband’s pain, his denial, and his delusion. It’s clear that Lee-Curtis is living in a world of his own —one where his sexual misconduct caused a mass exodus, but somehow if his wife wears the right hat to their church’s reopening event, crowds of people will show up to hear him passionately preach again. But he is also deeply lonely, having grown up in a world where his desires are seen as deviant and incompatible with the work he feels he was put on this earth to do.

That sad reality is mirrored in his wife’s actions: Lee-Curtis’ queerness is evident and undeniable, but barely acknowledged; It’s seen only as a bump in the road, a place at which to look the other way and continue their walk with Jesus; The couple thrives on ignoring everything outside of their aim to rebuild a church that funds their lavish lifestyle and reinvigorates the stream of constant gratitude from a community in need.

Women are the eyes and ears of Honk for Jesus. Literally —through its fictional documentary director Anita— but also in its focus on telling the story in a way that gives context to Trinitie’s choices. We see Lee-Curtis’ depressing truth because we witness this time in their lives through Trinitie’s eyes; The moments when her gaze wanders to monitor what he’s doing, not unlike the mother of a toddler. “The pastor may be the head and the face of a congregation,” she informs Anita, “but the neck, and the spine, the structure… that is all the first lady.” We recognize the clarity of a woman’s perspective even in the young girl (Selah Kimbro Jones), one of the five remaining congregants, happily admitting that she attends their church out of love for the theatre of it all; She comes across as more self-aware and perceptive than the pastor himself. Even the depiction of the Childs’ up-and-coming rival church, led by a young married couple (Nicole Beharie and Conphidance) pastoring together, Honk for Jesus makes sure to show us that the wife is the decision-maker, the strategist, and the smartest about every step they take.

In its final half-hour, the purpose of the marketing angle surrounding Regina Hall becomes clear. This is about Trinitie. Honk for Jesus. Save Your Soul. is a film by Black women about Black women, and it is magnificent. But queer Black men are collateral damage in this narrative: through Lee-Curtis’ actions, and through the film never differentiating between his queerness and his actual sins —the abuse of power, and taking advantage of vulnerable young men. The actors who depict this pain in pivotal scenes (particularly Austin Crute as Khalil) must be commended for their phenomenal performances as Lee-Curtis’ victims; They make a striking, monumental impact with their brief but powerful scenes.

Lee-Curtis’ abuse and infidelity caused this catastrophe, which helped Trinitie realize how decades of church instruction to obey and conform and perform to maintain a patriarchal structure has turned her into a shell of herself. She is a victim of her circumstance, but she is not blameless, and she doesn’t pretend to be. It’s emotional when she screams “I am the victim!” to the camera, but it’s also jarring because her outburst happens right after we finally hear from one of Lee-Curtis’ victims, who felt an emotional connection with the pastor, only to discover that he was one of many young men being treated in the same manipulative way. The disregard in Trinitie is a coping mechanism that’s barely keeping her together; the delusion in Lee-Curtis’ internalized homophobia is unmistakable; the desperation in both of them is palpable. Honk for Jesus delivers an important narrative. I’m sure many Christian women of colour will feel seen, especially in the portrayal of Trinitie’s quiet, relentless fight for something of her own.

Writer-Director Adamma Ebo shows serious promise: In her use of aspect ratios and voice recordings to depict when the Childs’ are performing for the documentary and when they are being their more intimate selves; in the stellar comedic timing that frequently elicits outright laughter; and in observational humour like the perfectly-framed shot outside the rival church building, which plays with perspective to convey the true threat level from the up-and-coming pastors. So much of the brilliance in this film comes from appreciating the accuracy if you grew up in the environment it depicts, but the engaging quality of Honk for Jesus tells a story of true filmmaking talent. I’d watch whatever Ebo makes next in a heartbeat.

Honk for Jesus has some of the best jokes I’ve seen on screen all year. It’s a level of hyperspecific entertainment value comparable to the South African bank heist film The Umbrella Men, and only because both films effortlessly reflect my lived experience with a perfect balance of profound and delightful that I never thought I’d see on the big screen. This film is not the upbeat parade of satire it’s marketed as, though. The story often makes your heart sink, leaving you reeling at consequences unspoken but shining in the characters’ eyes. Its depiction of the unquestioned and unchallenged homophobia in this particular fictional community (which represents many real ones) is heartbreaking and downright depressing for a significant period. For a while after the midpoint reveal, it feels impossible to connect with this film’s humour through the haze of Lee-Curtis’ denial and the brutality of his being forced to remain in the proverbial closet.

Honk for Jesus is an excellent offering to both the cinematic landscape and the landscape of social commentary on issues of the church; It’s absolutely worth watching if it interests you, but it’s difficult to enjoy without the fair warning of its dark, often painful, subject matter; So consider that before going in… But do go in. The powerful story —told through Hall and Brown’s chemistry together, and in their haunting vulnerability in the scenes when they’re apart— waits for you with arms wide open.

Tiresome Clerks III is a Rehash of a Rehash

Hockeyland — A Straightforward but Empathetic Documentary on Small Town Hockey