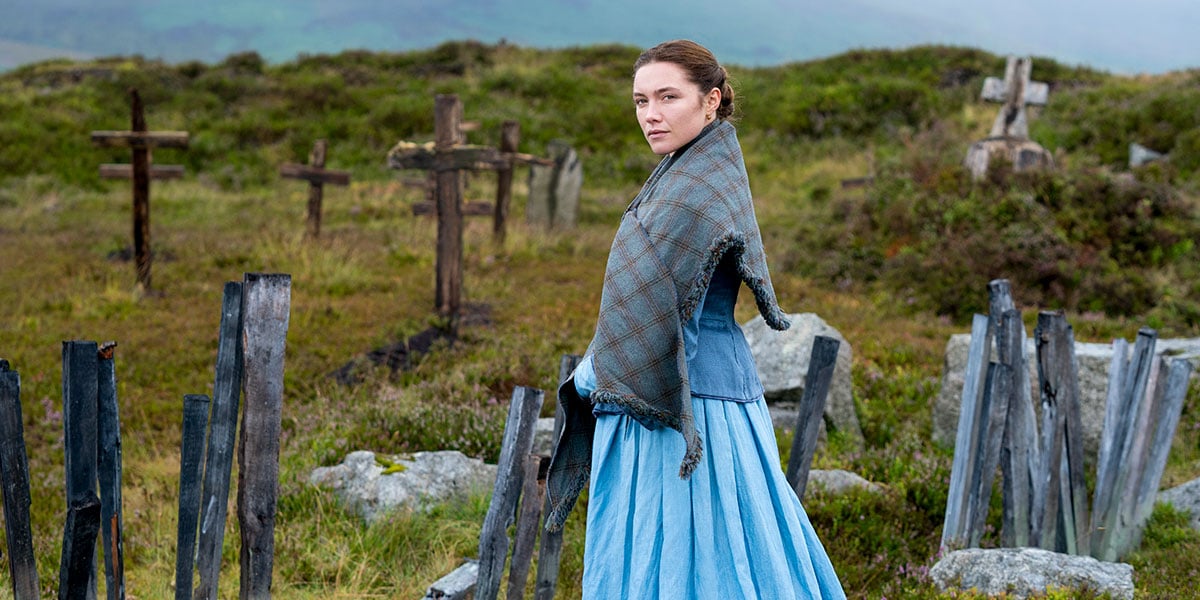 Sebastián Lelio’s The Wonder is a textbook case of a bold vision and a botched execution. It’s full of mesmerizing components, both visual and sonic, but fails to generate a coherent link between them. There are great ideas here that rap on the door, but they are not given the force to burst it open, creating an experience that utterly drags amidst its spurts of technical skill. It’s a gorgeous bore that is ultimately just as vapid as the beautiful empty landscapes it revels in.

Bookended by muddled fourth wall breaks—which in the grand scheme are only a tacked-on narrative device— the story, adapted from a novel by Emma Donoghue, follows Lib Wright (Florence Pugh, in a measured performance), a veteran nurse of the Crimean War, who arrives in the Irish countryside to observe an eleven-year-old girl, Anna O’Donnell (Kíla Lord Cassidy), who miraculously hasn’t eaten a crumb for four months.

Labeled as a saint and as a religious miracle, Lib’s investigation to determine the root cause of the titular wonder is hampered by an influx of pious tourists and a devout fervor. She quickly realizes she must take drastic measures to save Anna from an increasingly unstable situation, as a central clash between science and religion erupts around them.

A story like this demands rich substance and character exploration, but Lelio’s direction fails on both accounts, as he and his DP Ari Wegner (who continues her lyrical and atmospheric work from The Power of the Dog) attempt to give colour and depth to an empty canvas, but throughout the runtime only apply a few dollops of vibrancy to an all-but hollow and vacant mural.

Its more intimate, heartfelt, and profound conversations around the dangers of unadulterated faith are spread too far between utterly jaw-dropping vistas, where the characters pensively walk through the Irish moors. Yet, these stunning compositions become too much of a good thing and ultimately consume the film’s meaty, thought-provoking ambitions, as a majority of the runtime is yielded to thinly beautiful frames that are not given the substance to do them justice. The Wonder, without a doubt, is one of the most gorgeous films of the year, but it is also one of the most unsatisfying cinematic experiences in recent memory.

While the film’s visuals are wholly mesmerizing, its soundscape is equally impressive. Matthew Herbert’s score melds the orchestral with the electronic, cementing an unconventional ambiance that seamlessly settles into an ethereal stream, which perfectly captures the film’s haunting and mystifying subject matter. But its excellence only serves to highlight the film’s thematic and narrative shortcomings. There is a distinct lack of forward momentum and soul in its exploration of the spiritual and the miraculous, coming across as cold and exacting when it attempts to appeal to the audience’s heart— unearthing more confusion than profundity.

Much like the movie sets it depicts in its meta opening (which attempts to bask in the fabricated nature of the story), The Wonder is similarly just an empty framework — narrative scaffolding that is never given life and a central purpose by its abridged storytelling. Its spellbinding visuals and sound design serve no greater role than a fanciful cloak, which coaxes us into enduring its slogging and utterly aimless rendition of a period piece.
-Prabhjot Bains