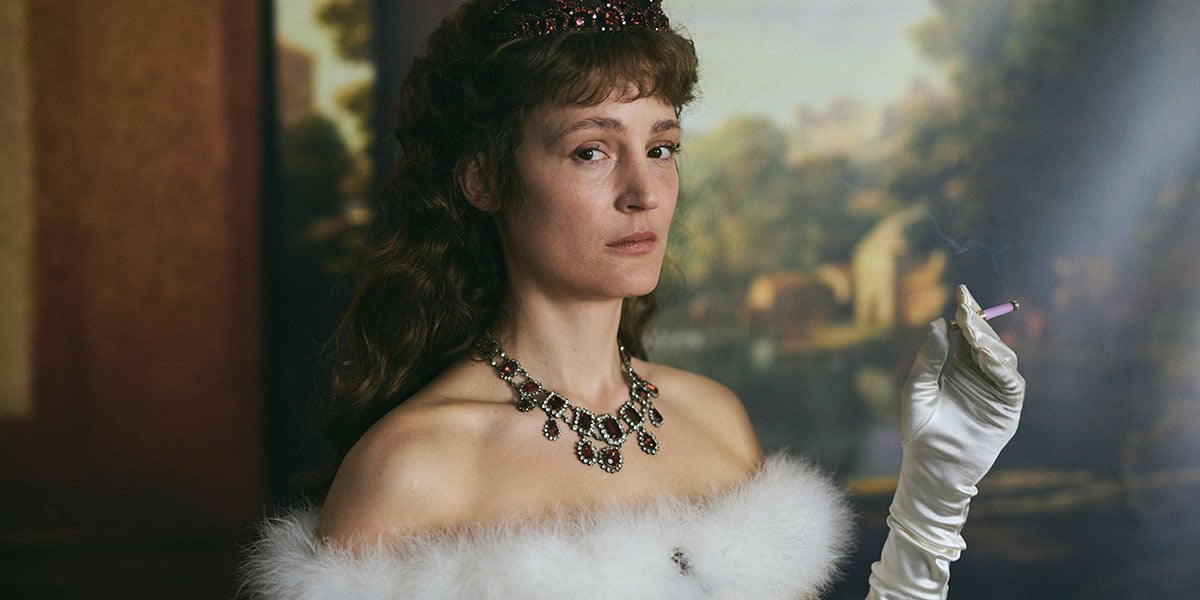 The ruling class of yore has long been a fascinating subject that is rich for filmic exploration, albeit to varying degrees of quality. The lavish and opulent lives of the royal families have continually captured the minds of filmmakers and moviegoers alike, as a decadent world that has long been dead is brought to life. The greatest films of the genre not only evoke the extravagant settings of the aristocracy but lift an all-important veil, laying bare a heartfelt and enticing dive into the inner lives of these timeless figures.

Marie Kreutzer’s Corsage is another beautiful and lush foray into that cinematic tradition, as it settles into an introspective and reflective stream that takes us through the twilight of Empress Elizabeth’s life.

The Empress was famed in lands far and wide for her unmatched beauty and corsetry, and Kreutzer manipulates this reputation, cleverly eschewing it to paint a portrait that captures Elizabeth’s reckoning with that legendary reputation on her birthday during Christmas in 1877, and the year that follows —poignantly tapping into both the inherent pains of being part of the ruling class and the pressures of the female experience. What results is a historical epic in miniature that captures this enduring figure with a vibrant, modern flair that pulsates with a simultaneous grit and elegance.

Much of the film’s greatness can be attributed to Vicky Krieps’ layered, graceful, and utterly fierce performance that unearths the oft-forgotten humanity of the Empress, which is obscured through her cold, piercingly beautiful visage, and attire. While Krieps’ rendition of the empress exudes a likeability, she doesn’t immediately embody that trait, as her nuanced turn revels in an intrinsic narcissism and recklessness, basking in a blatant disregard for her servants and chambermaids.

But concurrently, Krieps also boldly captures her suppressed desires and defiant spirit, which is forced to swelter under the hollow formalities and customs thrust upon her. There is a wild, vigorous, and compassionate woman that is clawing for a voice under the decorum, but the rigid etiquettes that carve out her existence only reveal an unfeeling and unmoving sovereign. Simply put, Krieps’s performance is that of a complete human being, that will rightly go down as one of the best of the year. Couple this with confident, skilled showings from Florian Teichtmeister (Emperor Franz Joseph I of Austria, Elizabeth’s husband), Aaron Friesz (Crown Prince Rudolf, Elizabeth’s son), and Colin Morgan (George “Bay” Middleton), and you have one of the best ensembles of the year.

Yet, Corsage’s cinematography and pure technical prowess might be its crowning achievement. Shot in a style that shifts between sumptuous symmetry and raw documentary-esque compositions, Kreutzer is able to elevate the film’s melancholic aura and wry sense of dramedy— playfully cascading through its personal moments of self-revelation and delectably lewd moments of sexual tension. There is a peering quality to the camera work that taps into a palpable sense of immediacy, which wonderfully complements Krieps’ bravura performance, wholly bringing to life a complex and provocative mural of a legendary, but misunderstood ruler.

Textured in its dynamic and vivid colour palette, Kreutzer achieves an impressive equilibrium between lush opulence and brash ruggedness. The gorgeous photography, in tandem with its’s eclectic score—which fuses modern pop with orchestral stings— and its luscious production design forcefully animates this period piece, casting it a cut above many similar works that struggle to captivate the less historically inclined.  It truly is a technical marvel.

Corsage is one of the best forays into the realm of historical biography in recent memory. It not only works as a beautiful dive into a world long departed but also as a treatise on the female perspective. For a woman facing down the cold, harsh, and exacting world of today, where beauty and youth still reign supreme, Empress Elizabeth’s 19th-century struggles no longer feel like they belong in the annals of history, but part of a lesson that is piercingly modern.

On This Day in Sports: Ben Johnson Lost his Seoul

The Wonder Is a Gorgeous Bore