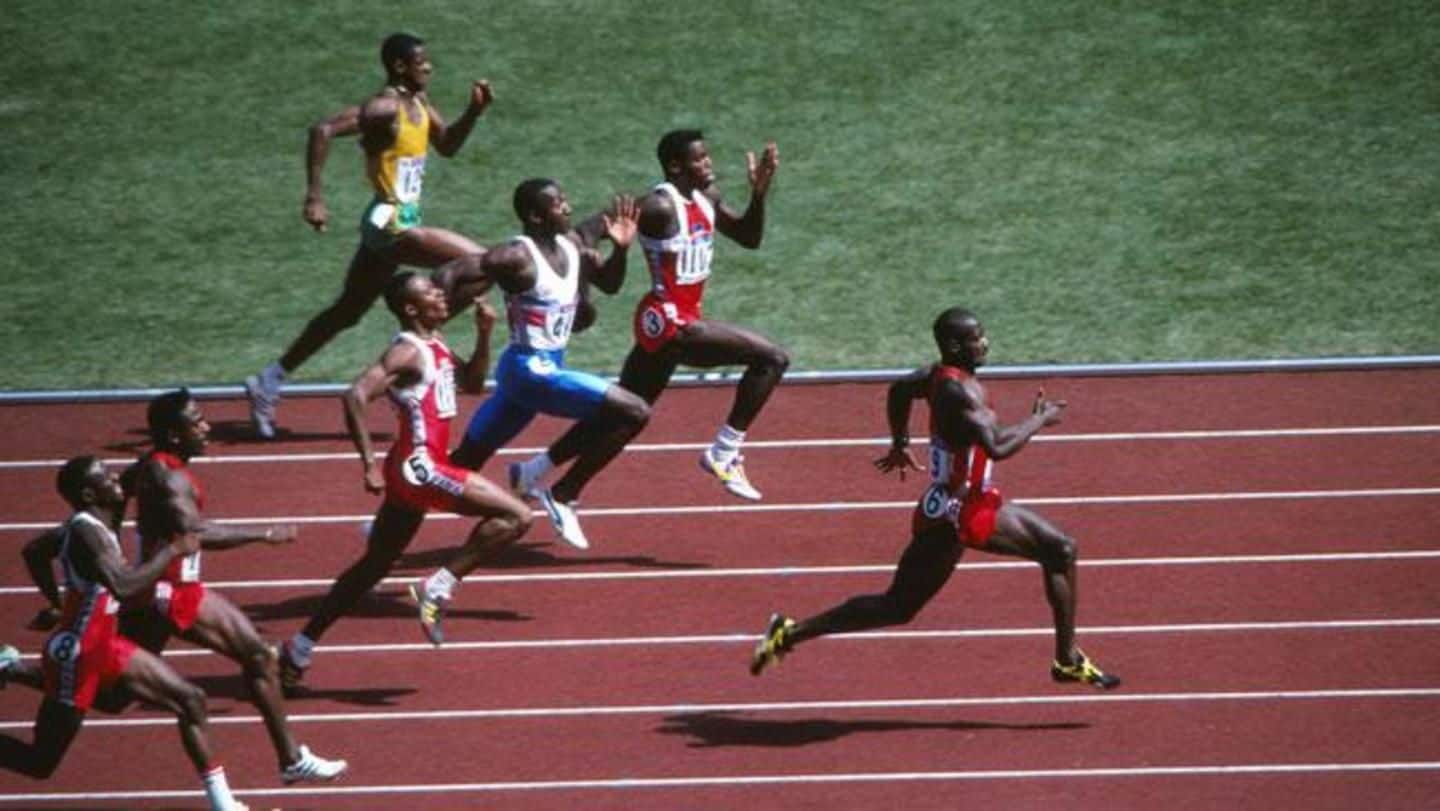 Except for hockey players, Canadian athletes don’t make international headlines as often as their fans would hope. This especially applies to Olympic summer sports. When the country produces generational talent, people take notice. Tokyo 200m gold medalist Andre De Grasse is currently the nation’s great hope for continued success in sprinting. Donavon Bailey is a legendary name who captured gold in 1996 in Atlanta in the 100m race (the author even watched the race live on television when it happened). Another sprinter representing the maple leaf earned himself a monumental place in sports history: Ben Johnson.

On September 24th, 1988, at the Seoul Summer Olympics the Jamaican-born, Ontario-trained runner shattered two things. First, the previous record time in the 100m competition. Johnson ran a stunning 9.79 seconds, beating his own record 9.83, easily earning the gold medal in the process. Second, he blew past his contemporary rival, American Carl Lewis. The two had been the greatest runners for a few seasons and the 1988 Seoul race felt like a culmination of their heated rivalry. It was a tremendous event for the runner, his trainer Charlie Francis (who ran himself a wonderful career), and Canadians from coast to coast to coast, as the expression goes.

What no one knew at that exact moment was that Johnson was about to shatter something else, possibly the most important of all. His reputation.

Shortly after the celebrations, Johnson, like all his fellow athletes, was asked to provide a urine sample. The Korean lab director received 100 anonymous samples later that day. Of them, one produced evidence of stanozolol and was quickly traced back to Ben Johnson. In laymen’s terms, stanozolol is a variety of steroids that can be consumed via tablets or via injection. As an anabolic steroid, it produces similar effects to testosterone and helps build muscle mass. As far as sportsmanship is concerned, its use is prohibited by the International Olympic Committee (IOC), as well as a great many other national and international sports organizations.

It didn’t take long for the IOC’s head of drug testing, Prince Alexander de Mérode, to communicate with Canada’s chef de mission, Carol Anne Letheren. She, in turn, had the unenviable but unavoidable task of taking Johnson’s shiny gold medal away. No win, no glory. The opposite, in fact.

Carl Lewis, the brash, despised rival, who had finished second in the race, was awarded first place. One may want to argue that the sports gods decided to throw salt into the wound, but the fact of the matter was that Ben, the beloved adopted Canuck, had not played by the rules. Nor, for that matter, had his coach Charlie Francis, who was adamant about his methods then and continued to defend himself and his athletes for years afterwards. Lest he is overlooked, there was also George (Jamie) Astaphan, the doctor who injected the performance-enhancing drug.

The shame and controversy were so significant the Prime Minister at the time, Brian Mulroney, called for Ontario’s chief justice Charles Dubin to launch an inquiry commission. This resulted in The Commission of Inquiry Into the Use of Drugs and Banned Practices Intended to Improve Athletic Performance, succinctly known as the Dubin Inquiry.

Revelations made during the Dubin Inquiry even led to revoking Johnson’s 1987 World Championship medal won in Rome. Dr. Astaphan boldly argued that the IOC’s drug testing report sported dubious details, most notably because he hadn’t supplied the sprinter with stanozolol. Because the drug is used primarily to build up muscle, it would have been consumed months prior to Seoul. Johnson’s preferred drug was furazabol. How reassuring. Equally embarrassing was that no fewer than 46 athletes admitted to steroid use during the inquiry.

Since then, Ben Johnson has been relatively quiet. He makes the occasional public appearance, sometimes for the worse, such as filming an advertisement in the 1990s for an energy drink, Cheetah. Oh dear.

On the 30th anniversary of the fateful event, the Toronto Star published a long-form article that investigated the finer details of the Olympic drug test report. Scribbles suggested tampering with the findings and possible alterations to the conclusions the lab team thought it best to draw. The article is behind a pay wall, but the website Running Magazine quotes many of the findings.

Regardless of how accurate and emphatic the Olympic drug testing team’s findings were (they certainly confirmed more than enough to justify the penalty), September 27th, 1988, lives on in infamy in Canadian sports. Ideally, professional athletes shouldn’t enhance their performances through such drugs. The reality is that most do. What made this chapter so devastating was that a good, Canadian kid was at the center of attention.

For a few glorious days, Ben Johnson was the fastest man alive.

The lustre faded just as quickly.