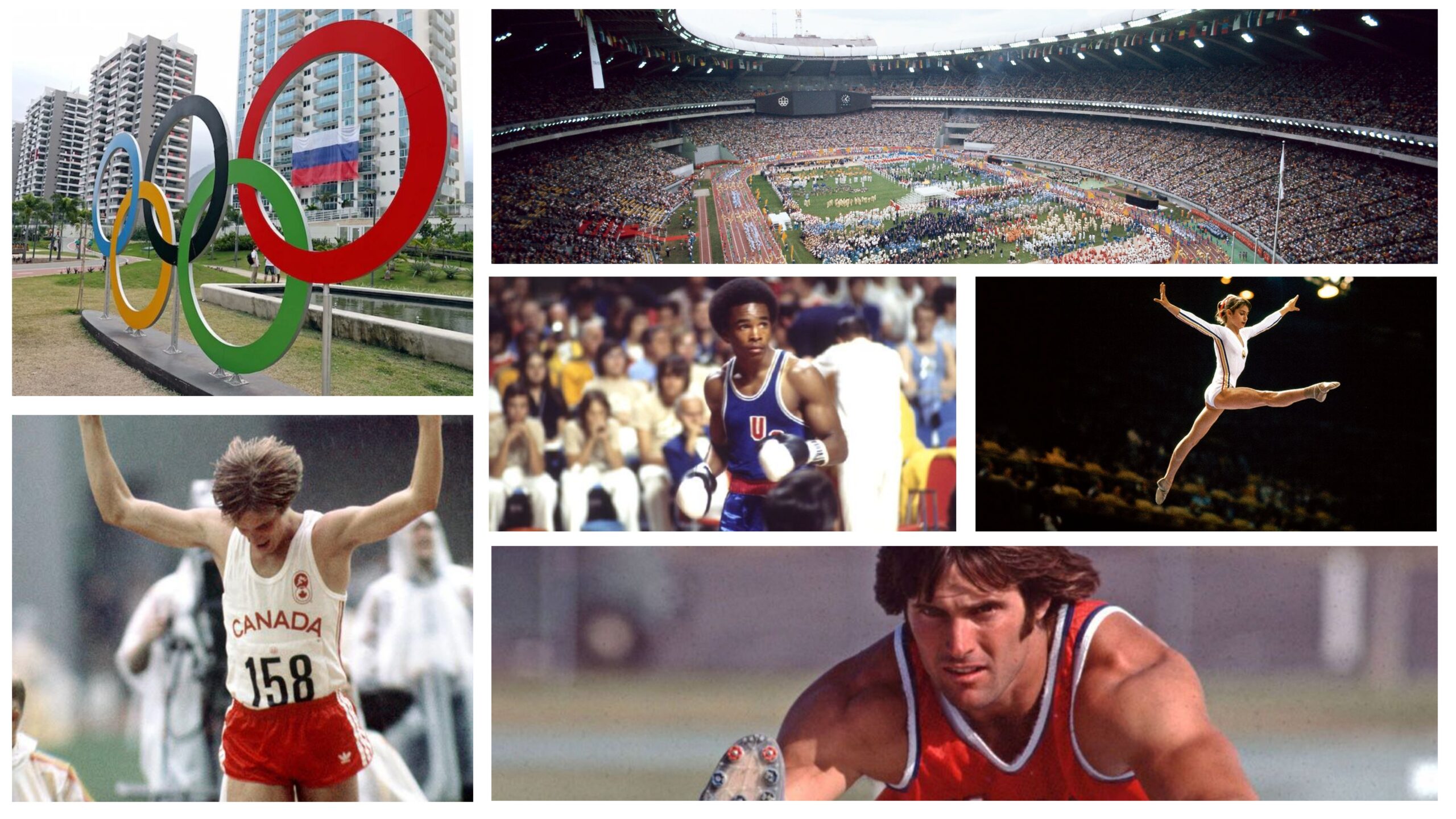 Relive the 1976 Summer Olympics in Montreal

It was on this day July 17, that the Montreal 1976 Summer Olympics (officially known as the Games of the XXI Olympiad) started. Montreal became the second French-speaking city to host the Summer Olympics after Paris, over the bids of Moscow and Los Angeles— and it was the first and so far, only Summer Olympic Games to be held in Canada. The event featured plenty of historic moments and thankfully the internet has enough footage to allow anyone to relive all the glory. Let’s take a trip to the past with these videos, images, and fun facts about the Montreal Summer Olympics.

Officially opened by Queen Elizabeth II, the Montreal Games marked the first time in Olympic history that a woman and a man carried the flame together. Montreal native, Stéphane Préfontaine (15 at the time) and Sandra Henderson, a 16-year-old from Ontario, lit the Olympic urn in front of a Big O crowd of 73,000.

Nadia Comaneci made history in 1976

Of course, Montreal 1976 is also remembered as the Olympic Games that saw the 14-year-old Romanian gymnast Nadia Comaneci become the first gymnast to score a perfect 10 on the uneven bars at the Forum, leaving the city as the indisputable Olympics darling.

Before the 1976 Olympics, a perfect score of 10 was believed to be impossible in gymnastics. In fact, the highest the scoreboard could go was 9.99. Nadia Comaneci changed that, and her perfect 10 was posted as 1.00.

The 4-foot-11, 86-pound teen would receive six more perfect scores before the Games were over and take home three gold medals for individual all-around, balance beam and uneven bars, along with a silver and a bronze. Comaneci earned the nickname Little Miss Perfect, made the covers of the world’s biggest magazine, and became a household name.

“I never felt they were perfect,” Comaneci told the Globe and Mail in 2012 about her scores of 10. “They were very good, but I still could have been better.”

The 1976 Montreal Games was also when Bruce Jenner became a household name. Jenner— who now identifies as a transgender woman and goes by Caitlyn— accomplished something hugely significant that year: He won the Olympic gold medal in the decathlon, becoming the unofficial “world’s greatest athlete” and inspiring a nation. Jenner’s victory was a defining moment of sports for his country, perhaps second in importance only to the 1980 U.S. men’s Olympic hockey team’s “Miracle on Ice” victory against the Soviet Union.

Apart from winning the gold, what happened afterward was, of even more long-term significance:

After crossing the finish line in the 1,500-meter finale, a fan rushed onto the track and handed him a U.S. flag. At first, Jenner didn’t know how to react, but it didn’t take long before he decided to wave the flag, making it a transcendent moment in sports. When you see Olympic champions waving their country flags after their victories, it is because of Jenner.

The 1976 Summer Olympics also marked the first time women competed in basketball, rowing and handball. Lasse Virén won the 5,000 and 10,000 metres Double Double, while Alberto Juantorema of Cuba became the first man to win both the 400 m and 800 m at the same Olympics. Teófilo Stevenson won his second boxing Olympic gold medal and Shun Fujimoto incredibly overcame pain and performed with a broken knee on the ring events for the Japanese gymnastics team.

“Although I was injured, I had to do it anyway — for me, for the team,” he would say later. He didn’t even tell his teammates: “I didn’t want to say anything to my team about my leg. I didn’t want to upset them.”

Despite excruciating pain, Fujimoto performed flawlessly on the rings, ending with a twisting triple somersault that had dislocated his knee and torn ligaments. At the time, he said, “the pain shot through me like a knife … it brought tears to my eyes.”

His courageous performance earned his team a gold medal and turned Fujimoto into an Olympic legend.

Meanwhile, Eleven boxers travelled from the United States to Montreal, all with dreams of capturing Olympic Gold. They called them the Dream Team and a few weeks later they returned as one of the greatest amateur boxing teams ever assembled winning five gold medals, a silver and a bronze. America’s squad was made up of Louis Curtis, Leo Randolph, Charles Mooney, Davey Lee Armstrong, Howard Davis, Clint Jackson, Charles Walker Jr, Michael Spinks, Leon Spinks, John Tate— and wait for it— “Sugar” Ray Leonard! The team would produce five future world champions, including three heavyweight champs and two Hall of Famers. Davis was the only one who wouldn’t go on to win a world title as a professional.

Despite not having reached the podium, a few athletes would still have a historical moment in Montreal 1976. Future IOC president Jacques Rogge made his third and final Olympic appearance as an athlete while future Japanese Prime Minister Taro Aso took part in the Shooting competition.

Canada, meanwhile, finished with five silver and six bronze medals but unfortunately became the first host nation to fail to win a gold medal on home soil, a feat made no less exceptional for being repeated at the Calgary Winter Olympics 12 years later. Oh, Canada.

Controversy, Boycotts and Doping at the 1976 Summer Olympics

Twenty-nine countries boycotted the Games due to the refusal of the IOC to ban New Zealand, after the New Zealand national rugby union team had toured South Africa earlier in 1976. Meanwhile, some of the athletes were tainted by accusations of doping, including Boris Onishchenko who was sent home to the Soviet Union after he was caught cheating during the fencing portion of the modern pentathlon— as well as legendary Finnish postman and distance runner Lasse Virén, who was suspected of transfusing his own blood.

Far more serious was the treatment of East German athletes, who dominated their events winning a total of 90 medals, in part because, the world later learned, they’d been fed performance-enhancing drugs for decades, sometimes without their knowledge, under a program known as State Plan 14.25. The well-being of the country’s youth was sacrificed in the name of glory and propaganda – and still, the scars are being healed. Many of the East German athletes went on to suffer psychological problems and had children with birth defects.

The British Royal Family at the 1967 Summer Olympics

There were 6,084 athletes who took part in the 1976 Olympic Games, and one of them just so happened to be Princess Anne, daughter of Queen Elizabeth, who became the first member of the British Royal family to compete in the Olympics when she rode The Queen’s horse, Goodwill, in the equestrian three-day event at the 1976 Montreal Olympic Games.

Queen Elizabeth II spent 10 days in the Belle Province during the event, arriving at St-Hubert airport on July 16 where she was met by Premier Robert Bourassa and Mayor Jean Drapeau. She of course also met Prime Minister Pierre Trudeau who spent a lot of time in Montreal during the Games and legend has it, he came across as a rock star, stealing the spotlight everywhere he went.

“Wearing an open-collared jersey and leather jacket (he) was in a mood reminiscent of his early political campaigning, as he kissed women team members and at one point began sparring with a member of the Olympic boxing team,” the Gazette reported.

With so many politicians, athletes, spectators, and members of the Royal Family, Montreal broke the mould in security. Following the terrorist tragedy at Munich four years earlier, Montreal and provincial police were joined by the RCMP and soldiers to deal with possible threats. The security bill ended up running $100m, not including the cost of the Canadian forces enlisted to help keep order. To this day, many claim the security was the tightest in the history of the Olympics.

By the time the event came to an end on August 1st, the reality of the financial toll began to kick in. The final tally of the cost for the Olympics was $1.6bn, including at least $1.1bn for the stadium alone. The Big O had officially become known as the Big Owe.

Of course, the federal government found a solution for the problem by introducing a nationwide lottery—a controversial idea since at the time, lotteries were seen as a form of gambling. The first of nine draws were held on April 15, 1974, and in the end, they raised millions for the Games, by selling tickets at a $10 a cost across the country.

The Olympic official YouTube channel has uploaded a five-part documentary series about the 1976 Games which we recommend. We also recommend this short two-and-a-half-minute highlight package.