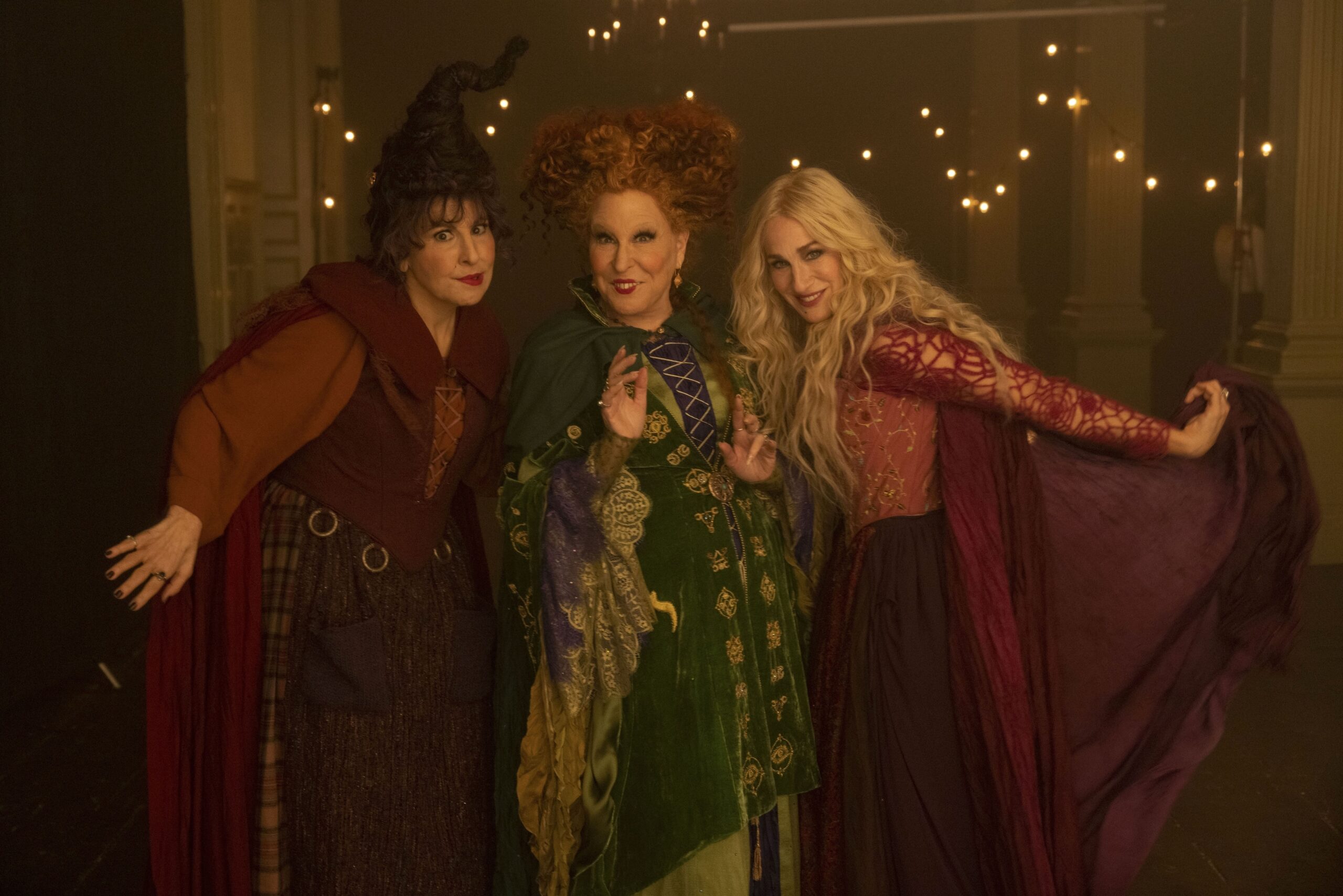 The Sanderson Sisters are back and iconic as ever! After 29 years, witches Winnie (Bette Midler), Mary (Kathy Najimy) and Sarah (Sarah Jessica Parker) return from the dead to once again wreak havoc on an unsuspecting Salem, Massachusetts in Hocus Pocus 2, the sequel to the classic 1993 film Hocus Pocus. Hocus Pocus 2 is a remarkable example of a sequel that understands and preserves exactly what made the original special while also keeping it fresh with new ideas and direction. It is an absolute delight that will undoubtedly be gracing countless screens every October for years to come.

The plot is very similar to the original Hocus Pocus. In 17th century Salem, the Sanderson Sisters are executed for witchcraft; however, before they die, they cast a spell ensuring their eventual resurrection. In modern day, a group of young people accidentally brings the Sanderson Sisters back to life; however, their return is only temporary, and they must cast a special spell by sunrise to make it permanent. Teenage friends Becca (Whitney Peak) and Izzy (Belissa Escobedo) must work to prevent the sisters from casting the spell, ensuring the witches’ return to the grave.

Seeing Parker, Najimy and Midler back together again is absolutely delightful. Even if the rest of the film had been absolutely terrible (luckily, it isn’t), it would have been worth it simply to see these three divas return to life. They are as charming, charismatic, campy, and confident as ever, and they know how to give fans exactly what they want. Unlike many contemporary reboots of classic series, there is nothing forced or affected in their delivery; the performers ease back into the roles with comfort, sincerity and grace.

The newcomers are also fantastic. Peak has the humor, relatability and charm needed to carry the protagonist side of the narrative, and Becca’s friendship with Izzy is believable and endearing. Peak and Escobedo make a great team, and they are a delight to watch. They also play off of Midler, Najimy and Parker very well, and the performances complement each other perfectly. The two are still emerging talent and this film is proof that people should be keeping an eye out for the future of the two promising young performers.

The writing is clever and funny, capturing the spirit of the first film perfectly without relying too heavily on direct references or recycled jokes. Any time there is a direct reference to a joke from the previous film, it is handled well; the film doesn’t linger too long or rely too heavily on referential nostalgic humor, and it always does something new or interesting with any references it does make. In a sequel to Hocus Pocus, it would be easy to lean heavily on an easy appeal to nostalgia, but this film avoids the easy route and instead makes a uniquely enjoyable movie that will be fun for younger viewers who have no connection to the original. It is impressive when a sequel can be filled with special treats for fans, while still keeping the door open for newcomers to enjoy it, and Hocus Pocus 2 navigates this balance perfectly.

Anne Fletcher’s direction is fantastic; the pacing is fast enough to keep things moving along but not so fast that it feels rushed. The comic timing is spot-on, and Fletcher constantly maintains the ideal tone for a live-action family-friendly Halloween film. The film is comfortable being ridiculous and silly, and it has enough dramatic flair to show off the diva talent of its leads; however, it also maintains a heart and an earnestness that keeps it grounded.

It’s also really exciting to see Sarah Jessica Parker show off a type of comedy that she doesn’t often get to showcase. One of the most enjoyable parts of the original film is seeing Parker embody the incoherent, absentminded, perpetually thirsty Sarah Sanderson. Full of random non-sequiturs, haphazard and uncanny acting choices, and quiet, offhand one-liners that are delivered subtly and barely registered by the other characters, Parker’s absurdist performance is one of the most uniquely compelling parts of both the first film and this sequel. Audiences are more likely to associate Parker with a grounded, realistic (if somewhat heightened) style of comic performance due to her Sex and the City fame, so it is nice to see her embrace a style of unhinged, bizarre humor that she is very good at but rarely does. While the chances of her saying yes to more roles like Sarah Sanderson are unlikely for the HBO star, it would be nice to see more of the sillier side of SJP.

In light of all of its shenanigans, Hocus Pocus 2 does also manage to sneak in a reasonable amount of effective commentary and some important life lessons. Considering a large part of its audience will be children, its ability to convey effective messages about friendship, communication, understanding and empathy is impressive. While its entertainment value and good-hearted fun would have been sufficient on its own, it is nice to see that Hocus Pocus 2 is also mindful about communicating some meaningful messages to its audiences.

It’s hard not to love Hocus Pocus 2. Long-time fans of the original will be delighted to see a faithful-yet-distinct sequel, and newcomers to the franchise will be won over quickly by a lovable protagonist and three of the most iconic fictional witches of the 20th century. Hocus Pocus 2 more than earns its place in the canon of Halloween classics, and will likely be enjoyed by countless families every October for years to come.

On This Day in Sports: Ben Johnson Lost his Seoul