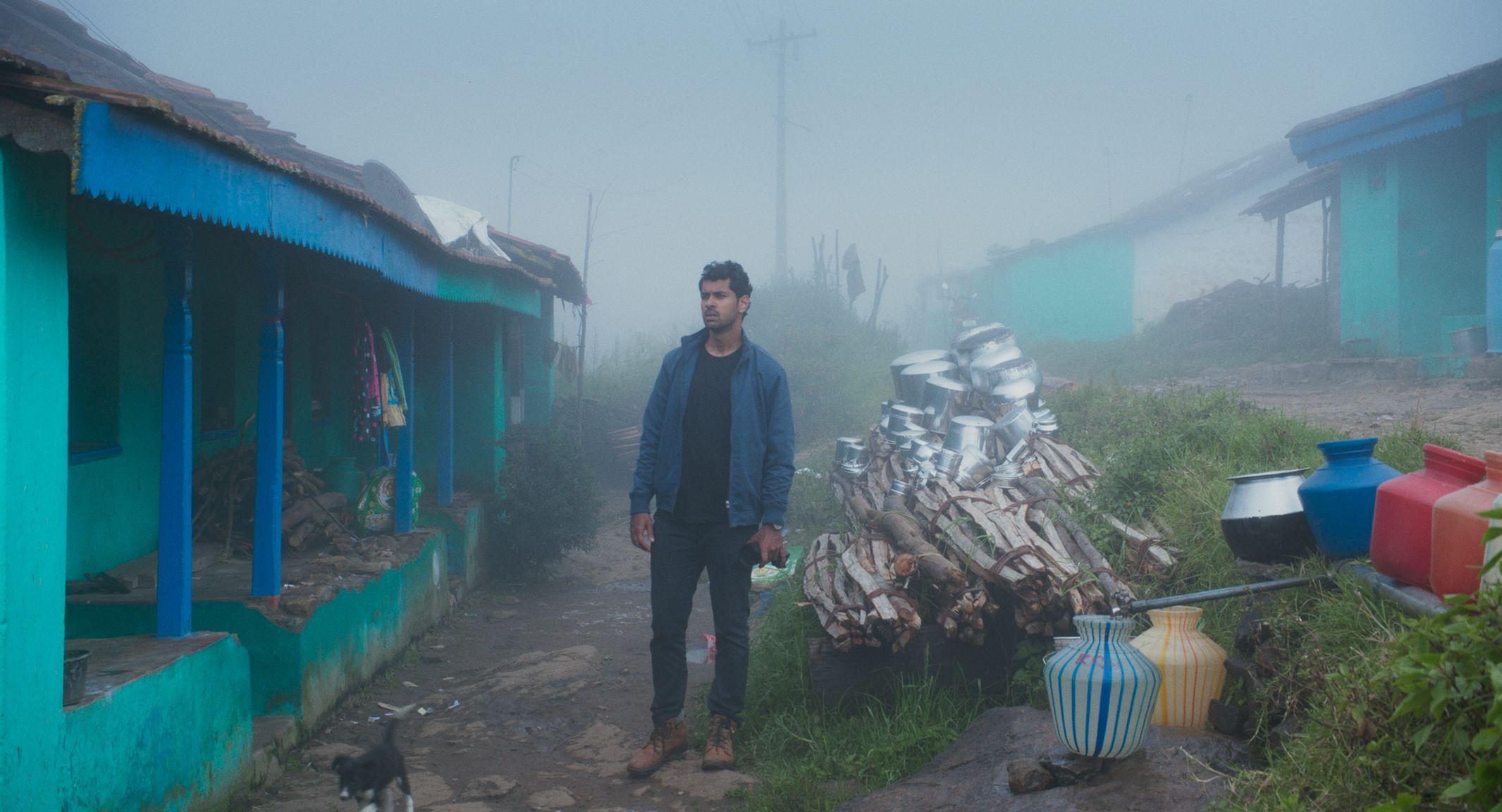 Following a journalist in his pursuit of coverage of a natural disaster, The Tremor provides an examination of sensationalism and “fake news”, and the mindset which can generate a dangerous headline. Balaji Vembu Chelli’s debut is a slowly-paced procedural that meanders until it eventually devolves into an absurdist comedy of errors. With rarely anything happening in the film and a protagonist that lacks self-awareness, the film’s only staying power is its focused gaze upon a world craving information – whether real or fake.

Early in The Tremor, there is a long, unbroken POV-shot of a journalist walking towards and through the aftermath of a large earthquake that has devastated a small village. Throughout that shot we see another journalist boasting about his promptness to get coverage of the disaster; a man looking for his family; another person being taken away on a stretcher; a worker on break, with another cleaning up fallen branches; and finally, a dead body. All during this scene is a haunting score by Maarten Visser that amplifies the melancholy and destruction. It’s a chilling encapsulation of the different ways people are involved in a tragedy of this scale.

That scene plays out after an amateur photojournalist (played by Rajeev Anand) gets a tip that an earthquake has hit the nearby village of Kookal. With just a tidbit of information, he puts all his plans on hold with the hope that this could be his big break. Traversing through the mountainous landscape (beautifully captured by Vedaraman Sankaran) with no real sense of where he’s going or how to get there, he is left to his own devices as he tails vehicles and questions locals in the hopes of finding the disaster site.

This is what makes up the majority of The Tremor as the director tries to convey the line between fact and fiction in a world increasingly consumed with the notion of “fake news”. As our protagonist runs into dead end after dead end, the movie slowly reveals its hand to uncover a satire hidden beneath the amateur sleuthing and self-seriousness.

Essentially divided into two tonally different halves, there is an admirable quality to how Balaji Vembu Chelli unwraps everything. Increasingly more irate as the day goes on, Anand’s performance as the photojournalist desperate for a great story ends up being the glue that holds The Tremor together. As the film fractures, much like the earthquake itself, there’s a reliance on the main character to find something to latch onto or his entire pursuit will have been for nothing. This is where the movie struggles most in trying to keep itself interesting. It’s a short film (running at 70 minutes) but once the movie starts emphasizing its main point – what information is real and what is not – the only thing left is for the film to explore the desire for something sensationalist. At which point it’s already kind of done that too.

However, even by this point, it becomes clear that the only message which both the director and main character seem interested in is the desire to create something out of nothing. With this in mind, The Tremor actually does have some interesting ways of using cinema to demonstrate how easy it is to make nothing feel substantial. The first half of the film consists of long shots of Anand’s character fixating on anything that stands out, much in the way that audiences do when watching horror films like Paranormal Activity where what matters is the small occurences within the frame. Layered on top of that is a score that emphasizes urgency and dramatizes every moment of pursuit, even when what’s being teased as the result is just a tiny bit of information.

When The Tremor ditches its dramatized presentation of the pursuit of facts, it also reveals the birth of fake news. It becomes a movie about desparation. Instead of maintaining the weight on the shoulders of the photojournalist, it pokes fun at his plight. Where the film could have explored its own ideas of tragedy being mined for selfish reasons – and it even offers more for the journalist to cover – it instead has a character with one goal trapped in a tunnel towards it. He will get his story whether it’s true or not. The only forward momentum ends up being the daylight disappearing, with ideas already presented and cemented into the audience well before the night arrives. The Tremor isn’t particularly engaging but it does offer a tantalizing look at how the truth can be bent and twisted into something radically false for one’s own benefit – even when all the facts stand in the way.

Nightstream: Detention Has Little to Offer Beyond Its Video Game Origins