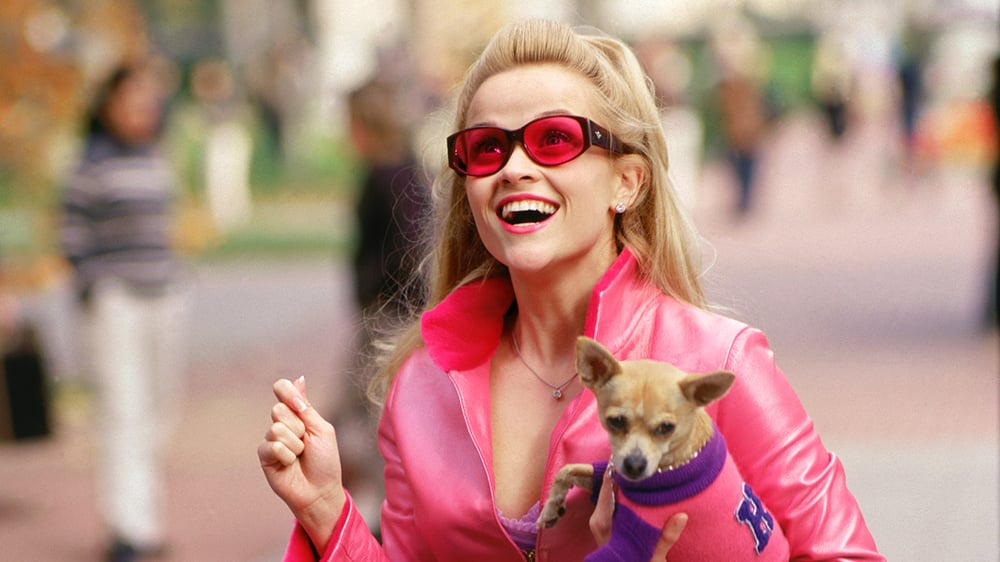 It’s fortuitous that on the 20th anniversary of Legally Blonde, Jennifer Coolidge is having a moment. Then there’s Reese – when is Reese Witherspoon not having a moment in the last few years? The movie even hit Netflix’s Top 10 when it arrived on the streaming service this past Spring. In a sea of movies from the early 2000s, most of which didn’t age well, Legally Blonde is an anomaly. It still resonates with women, not just Millennial and Gen X women because of nostalgia, but because many of the overarching themes; kindness, female friendships, tackling sexism in academia and the workplace, and imposter syndrome in a space that wasn’t created for you, hold weight to this day. Plus, it taught an entire generation what happens when you take a shower after getting a perm.

When Elle Woods (Witherspoon), a California sorority girl, gets dumped by Warner Huntington III (Matthew Davis), she decides to win him back by enrolling at the same elite law school as him and prove that she’s worthy of his love. It quickly becomes apparent that Warner is absolute trash, his new fiancée, Vivian Kensington (Selma Blair) is cruel, and Harvard Law School is a lot harder than Elle thought it would be. It broke out of the mold commonly seen at the time and instead of pitting woman against woman over a man, Elle and Vivian eventually realize Warner is the one not worthy and Elle and Vivian can be cordial, eventually becoming friends.

A well-used montage can be incredibly effective and Legally Blonde has two that are firmly baked into peoples’ psyche. Interposing Elle studying for the LSAT and getting help and encouragement from her friends with her Harvard Law School application video is a feast for the eyes. Not only do Elle’s friends come together to support her but she works her butt off to get the LSAT grade she needs for admission. It ends up being a great use of juxtaposition when the audience learns later that Warner didn’t have to work very hard to get into the same school. He was put on a waitlist, and his family had to make a phone call to secure his admission. The second montage also features Elle working hard. This time it’s to prove she does belong in law school and might even have an aptitude for it. When Joanna Pacitti’s “Watch Me Shine” plays over a montage of Elle buying an Apple laptop in 2001, the film dates itself with a fun hint of orange-toned nostalgia.

Fashion is successfully used to display Elle’s journey in trying to be a “serious” law student. She transitions from pink to teals to black until the final courtroom scene puts her back in her signature color. The bright sequin bikinis from the admissions video montage have inspired dozens of imitations over the years from clothing brands. It’s what Witherspoon wore when she posted on Twitter that Legally Blonde 3 is in the works. Embracing the femininity of pink, sparkles, and perfectly blow-dried big bouncy hair works well with the story’s reframing of how often people let beauty become someone’s defining characteristic, even when presented with dozens of other traits.

It would be wrong to not talk about how much heart and warmth the supporting characters exude. Just ask Ariana Grande; the inimitable Jennifer Coolidge brings nothing but joy to a viewer as soon as she graces the screen as Paulette. Emmett (Luke Wilson) is excellent boyfriend material, striking the right chord between supportive, encouraging, and charming. Holland Taylor is on screen for less than ten minutes and steals the show when she does a slow swivel in a salon chair.

It has some problems, particularly noticeable through a 2021 lens. For example, not all gay men know designers and listen to Cher. Certainly, many proudly do, but it’s an old-fashioned homophobic stereotype propped up by toxic masculinity that doesn’t need to be there. Almost all movies pre-2010 have some outdated jokes, references, and/or primarily white people in a space that usually has other people. Legally Blonde doesn’t have too many faux pas, but hopefully the third will have less and have more representation so that other aspiring female lawyers get to see themselves onscreen.

In hindsight, the movie was the beginning of an empowering journey for Witherspoon, now reportedly one of the most powerful women in Hollywood. It set her on a path to focusing on female-driven stories, producing, and ultimately leading to the creation of production company Hello Sunshine and Reese’s Book Club. With Legally Blonde, Witherspoon became a household name, a bonafide THEM, and went on to win an Oscar for her performance in Walk the Line. Even with an Oscar, Witherspoon was still getting offered sexist ‘girlfriend’ roles for years. Eventually, she took her fate into her own hands and started optioning books, working with people to tell real complex women-centered stories. With Legally Blonde 3 in the works and Witherspoon holding meetings with the first film’s writers, this next installment in Elle’s life will hopefully pay homage to the original and remind everybody that women belong in all spaces where decisions are made, including a courtroom.

Pig is the Nicolas Cage Revenge Movie You Never Expected