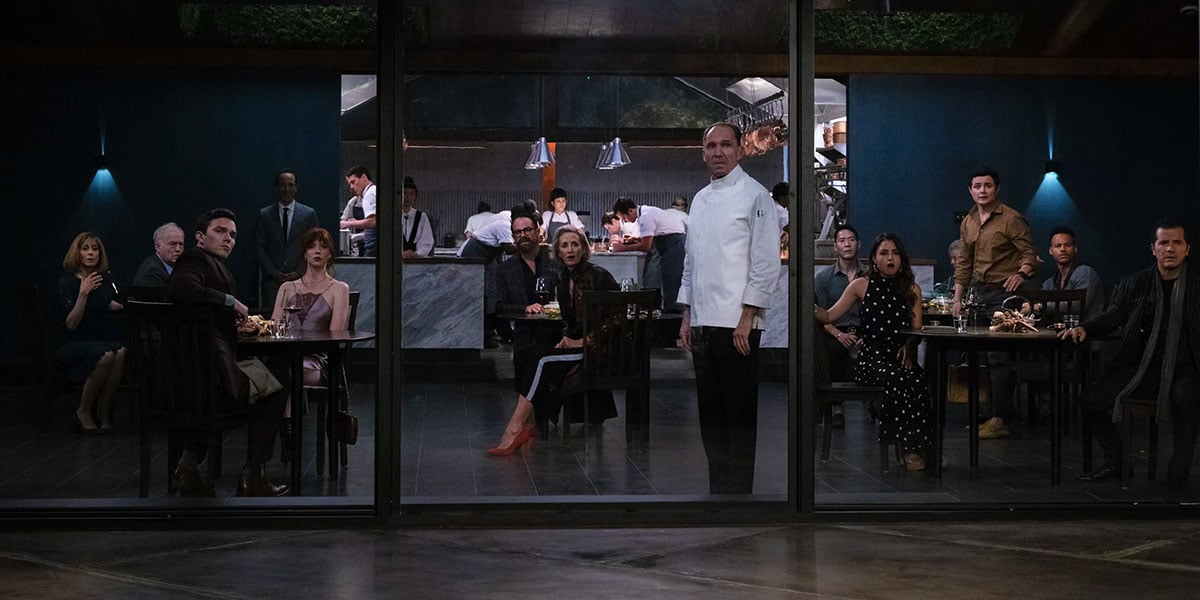 The culinary world has seen a marked rise in status and popularity with interesting and challenging cuisines becoming all the rage. In addition to the influx of picture-perfect, Instagram-able meals, the celebrity chef has infiltrated the celebrated halls of pop culture to a dizzying degree, with their eclectic personas gaining widespread traction with a growing audience of epicures and non-foodies alike. With the rise of haute cuisine, there is also a growing divide, as only the cream of society gets to partake and indulge in the best of what the culinary greats have on offer. Yet, the same privileged few who engorge themselves on this world-class food are often the ones who take it for granted, not giving the artistry on display its proper due.

Mark Mylod’s The Menu perfectly and sharply captures the milieu of this fine dining world with a scathing takedown of the condescension and pretension that fuels it. Its critique of the bumbling elite who soullessly partake in these exclusive meals is not only visually decadent but utterly observant and pointedly accurate — especially when it waxes philosophical and serves up the cringe comedy.

Set almost exclusively on the self-sufficient Hawthorne Island, its eponymous restaurant represents the zenith of exclusive victuals, serving celebrities and billionaires at $1,250 a head. The outliers amidst the evening’s auspicious clientele are Tyler (Nicolas Hoult), a reverent gastronome, and his date, Margo (Anya Taylor-Joy), a layperson tagging along for a free meal. Among the guests are a triumvirate of corporate shills, an esteemed restaurant critic (Janet McTeer), and a washed-up actor (John Leguizamo).

Welcomed by the lauded head chef (Ralph Fiennes), they are met with ethereal, psychological monologues before each course. As the tasting menu progresses, it slowly morphs into a culinary hell, as each dish forces Hawthorne’s patrons to violently confront their status and unadulterated greed.

What could have been a half-baked satire, is devilishly bolstered by a sharp, piercing lens that is only further emboldened by its slicing, cacophonous sound design, which delectably jars and unsettles in equal measure. The ominous and enveloping score only serves to heighten this effect. Mylod’s gliding camerawork cements the restaurant’s open-concept kitchen as an opulent prison, eloquently traversing each table’s hilarious and sardonic conversations before it makes its way through the kitchen’s pressure-cooker gauntlet of insecurities and unchecked pride.

In addition to the bold and deftly crafted visuals, The Menu is bursting at the seams with provocative and stirring hilarity, firing a consistent volley of inventive jabs and clever running gags that all coalesce and build off one another in a strikingly memorable way. This is unabashedly an experience that will not lose any staying power with repeated viewings, as the film’s awkward edge makes for a deliciously deranged and utterly enjoyable undertaking.

The film is at its most memorable and enjoyable when its humour leans into its central concept, wickedly playing with the names and descriptions of its dishes to a gut-bustlingly funny effect. This is dark comedy done right, as it wholly understands the full potential of the medium, preying on every sense to confidently deliver its comedic insights.

Yet, The Menu wouldn’t be half the marvelous experience it is without Ralph Fiennes commanding performance. He towers over the ensemble cast with an unsettling bravura that is utterly enthralling and captivating. It becomes a herculean task to take your eyes off his stoic, and unnerving visage. With each one of his thunderous claps commencing the next brutally violent course, it becomes immediately clear that he is the glue holding this experience together.

Anya Taylor Joy and Nicolas Hoult are also a delight to behold, as their tensely playful demeanour works well off Fiennes daunting and inimitable presence. John Leguizamo is also a highlight, as his character’s ardent blundering and inflated ego make for some of the greatest comedic sequences in the film.

While there are instances of face-palm-inducing character decisions, they are few and far between, as the film’s sizzling farcical edge is never taken off the burner. The Menu is a wonderfully twisted dark comedy that is not only deserving of a five-star Yelp review but also a Michelin Star.

The Swimmers, While Powerful, Gets in its Own Way