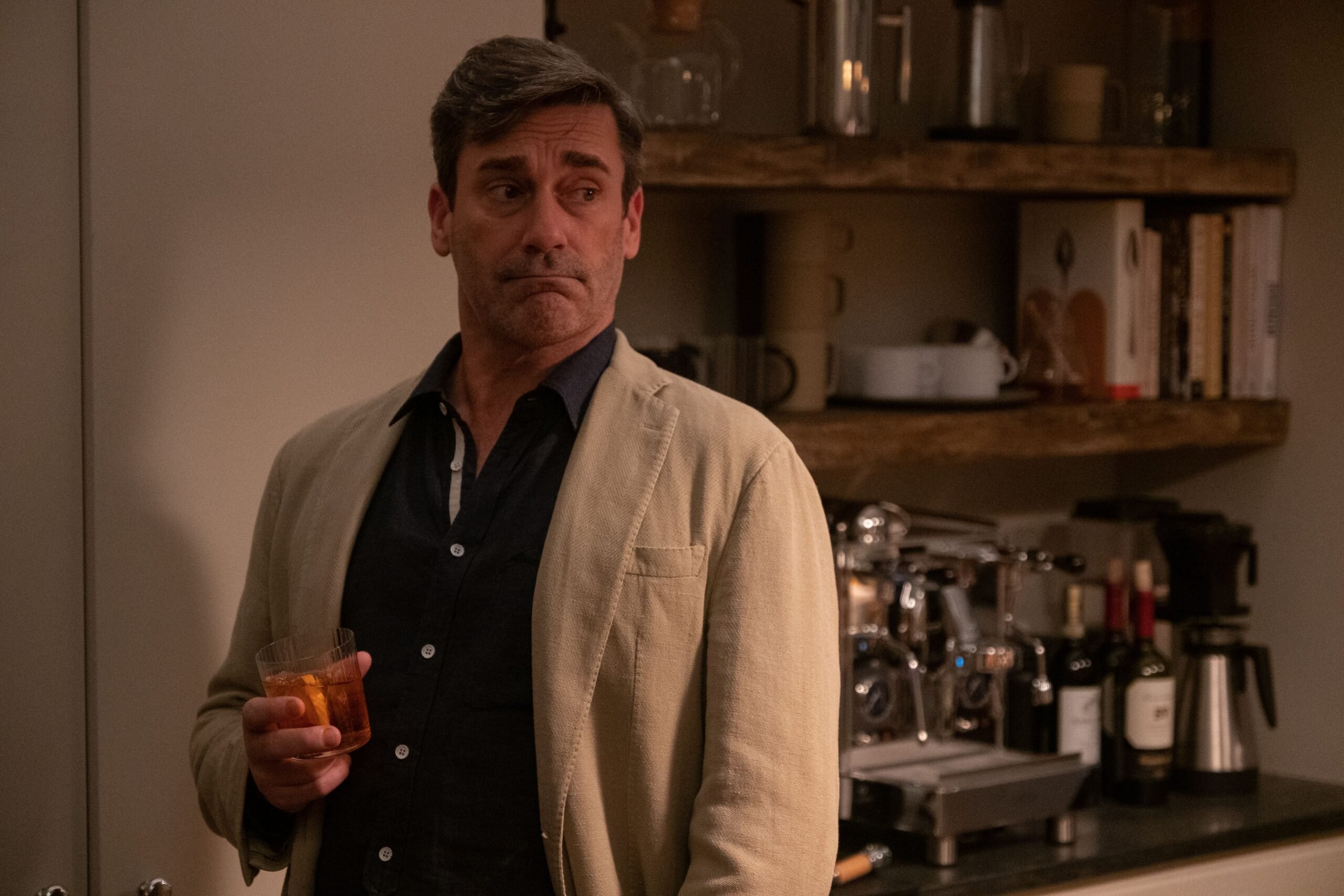 I’ve been wanting Jon Hamm to emerge as a movie star for about 15 years, ever since he first emerged with an all-time dramatic performance on Mad Men, and frequently hilarious appearances on Saturday Night Live and 30 Rock. I always thought Hamm was another George Clooney- an actor who first got famous on a TV show in his late 30s, and then emerged as a movie leading man.

But it hasn’t really worked out that way. His first big starring role, in the Disney inspirational sports film Million Dollar Arm, tanked, and while he’s had a few starring roles in stuff like Beirut, most of his memorable film work has come in supporting roles in the likes of Baby Driver, Bridesmaids, and Top Gun: Maverick. Movies in which he’s been really fantastic, like Marjorie Prime, have been seen by almost no one.

But now, at last, the 51-year-old Hamm has his great movie star role- the one that used to be Chevy Chase’s.

The movie is Confess, Fletch, and it represents a revival of the character Chase played in two 1980s movies, Fletch and Fletch Lives. Based on the work of novelist Gregory McDonald, Irwin Fletcher is something of an unconventional character: Nominally a journalist, he’s a wise-cracking troublemaker who solves mysteries, often by using colorful aliases.

There have been numerous efforts over the years to make a new Fletch movie, but now it’s finally here, and it’s fantastic. And Hamm is a natural in the role, throwing around his considerable charisma as the sort of guy who would spend weeks wearing a Lakers hat around Boston.

The director is Superbad and Adventureland‘s Greg Mottola, who knows his way around comedy, and Mottola has co-written the script with Zev Borow, directly adapting a specific McDonald novel, of the same name.

The plot of the new movie has more in common with the sequel, Fletch Lives, than with the first film. which was also about Fletch being framed for murder; the Fletch Lives movie was not based on any particular Fletch book.

Full of great lines, it’s one of the year’s best comedy scripts, although I confess I never quite cared much about the Picasso theft plot.

Confess, Fletch has also assembled a fantastic cast, and in keeping up with the tradition of the Chase movies, the majority of scenes have the Fletch character riffing with one other person.

The film is set in the present day and follows Fletch in Boston. Retired as a journalist and having just gotten together with a gorgeous Italian woman (Lorenza Izzo), Fletch is investigating some intrigue involving stolen Picassos. In the Back Bay brownstone that he’s renting, Fletch discovers a woman’s dead body and becomes convinced that he’s being framed for murder.

He’s being investigated by a pair of cops (Roy Wood Jr. and Ayden Mayeri) who are skeptical of them, but Fletch decides to investigate the crime himself. And this puts him across the table with various fantastic actors, and the chemistry in these scenes provides most of the movie’s magic.

Kyle MacLachlan has a winning turn as an eccentric art dealer; I was hoping Twin Peaks: The Return would bring him a movie acting resurgence of his own, but that hasn’t really happened either. Marcia Gay Harden plays a seductive countess, and there’s even a Mad Men reunion, with Hamm once again drinking next to John Slattery, who plays a foul-mouthed newspaper reporter.

But the best scene in the movie has Fletch with Annie Mumolo, from Barb and Star Go to Vista Del Mar, as a stoned neighbor who throughout the sequence grows more and more oblivious to the chaos going on in her kitchen, from fires to bloody cuts.

This is a comedy that absolutely deserves to find an audience, although due to its unconventional release plan, I’m not sure it will. Made by the current incarnation of Miramax and distributed by Paramount, Confess, Fletch is getting a brief theatrical release, along with a VOD bow, on September 16, before landing on Showtime in October. But however, you see it, Confess, Fletch is worth the watch, to finally see Jon Hamm shining in a leading man role.