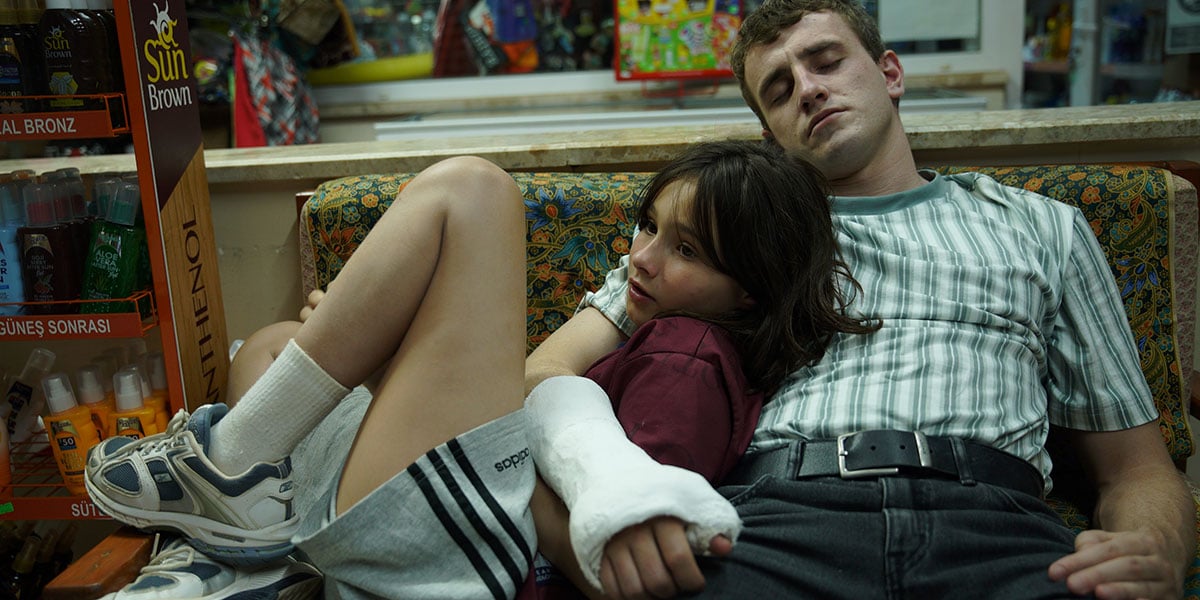 Charlotte Well’s Aftersun is a debut for the ages. Committed to both subjectivity and bracing honesty, it seamlessly settles into an equilibrium that brings forward a type of sincerity that is rarely, if ever, matched, seeping into the subconscious and probing its viewers into making their own profound reflections. With every carefully curated frame enveloping the senses, it’s not difficult to find yourself drifting into its serene, melancholic current as you come to terms with the fleeting memories you have of your own loved ones.

Opening with a cacophony of distorted digital images and piercing strobe lights, Wells visually constructs a mindscape that powerfully epitomizes the process of recalling a rush of distant, fading memories—which are difficult to piece together into an intelligible portrait.

Though on the surface, Aftersun follows the fading reminiscences of a woman recalling a childhood vacation to Turkey with her father, she is seldom seen, only briefly flickering onto the screen within her dreamlike recollections. Instead, Wells points her brush towards singular moments during the trip, warmly bringing these cherished memories to life with the gentlest of touches.

Set in the mid-90s, thirty-year-old Callum (Paul Mescal) and his eleven-year-old daughter, Sophie (Frankie Corio) are often mistaken for siblings, not only due to Callum’s boyish looks, but also his playful demeanor. It’s clear from the get-go that the pair gets along well. Divorced from Sophie’s mom, Callum hopes to make the best of their time together as they take in the lavish weather, glistening pools, and enchanting markets of the seaside resort— all with their MiniDV camera in hand.

With so much to explore and latch onto Wells chooses to defy convention, underpinning her approach to sound and image with a surreal fervor that feels wholly intimate and detailed despite us never truly learning about the inner lives of these characters.

Wells is not afraid to linger on objects both tangible and immaterial, as her floating camera work washes over its audience, immersing them in the lives of these endearing, enigmatic characters. Fortified with dynamic elliptical editing, Aftersun’s cinematic design fixates on reflections and shadows, visually evoking the refractional, murky, and obscured lens with which we recall our youths and loved ones. This is unequivocally one of the most gorgeous films of the year, with some shots leaving an indelible mark, staying with you indefinitely— much like the same memories Sophie is attempting to parse out in her adulthood.

With such visual mastery on display, it’s easy to find yourself submersed in its sweeping tides of genuine, heartfelt emotion, vicariously attaching your own experiences and recollections onto the canvas Wells paints of their lives.

Moreover, Paul Mescal’s magnetic performance brings to life one of the greatest depictions of flawed fatherhood in recent memory, as he brims with both an ineffaceable warmth and an endearing ruggedness. Mescal’s Callum is far from the perfect dad but as he battles with his demons, we are drawn into his concerted effort to not only be a great parent but a best friend to his daughter. Corio’s Sophie radiates with an innate curiosity, as her expressive, yet understated performance perfectly captures the sheer multitude of what this trip means to her—and the profound impact it will have on her as she ages. Simply put, it’s one of the strongest child performances in recent years.

Aftersun excels off its two dynamic performances, taut direction, and lush cinematography. It’s no surprise that it all beautifully coalesces in a cathartic swell of emotions that crash down on its audience with immense power, unearthing all the faint and fleeting images we have of the people who mean the most to us. It truly is an astonishing achievement.

Causeway Offers Strong Performances, Good Intentions, and Not Much Else