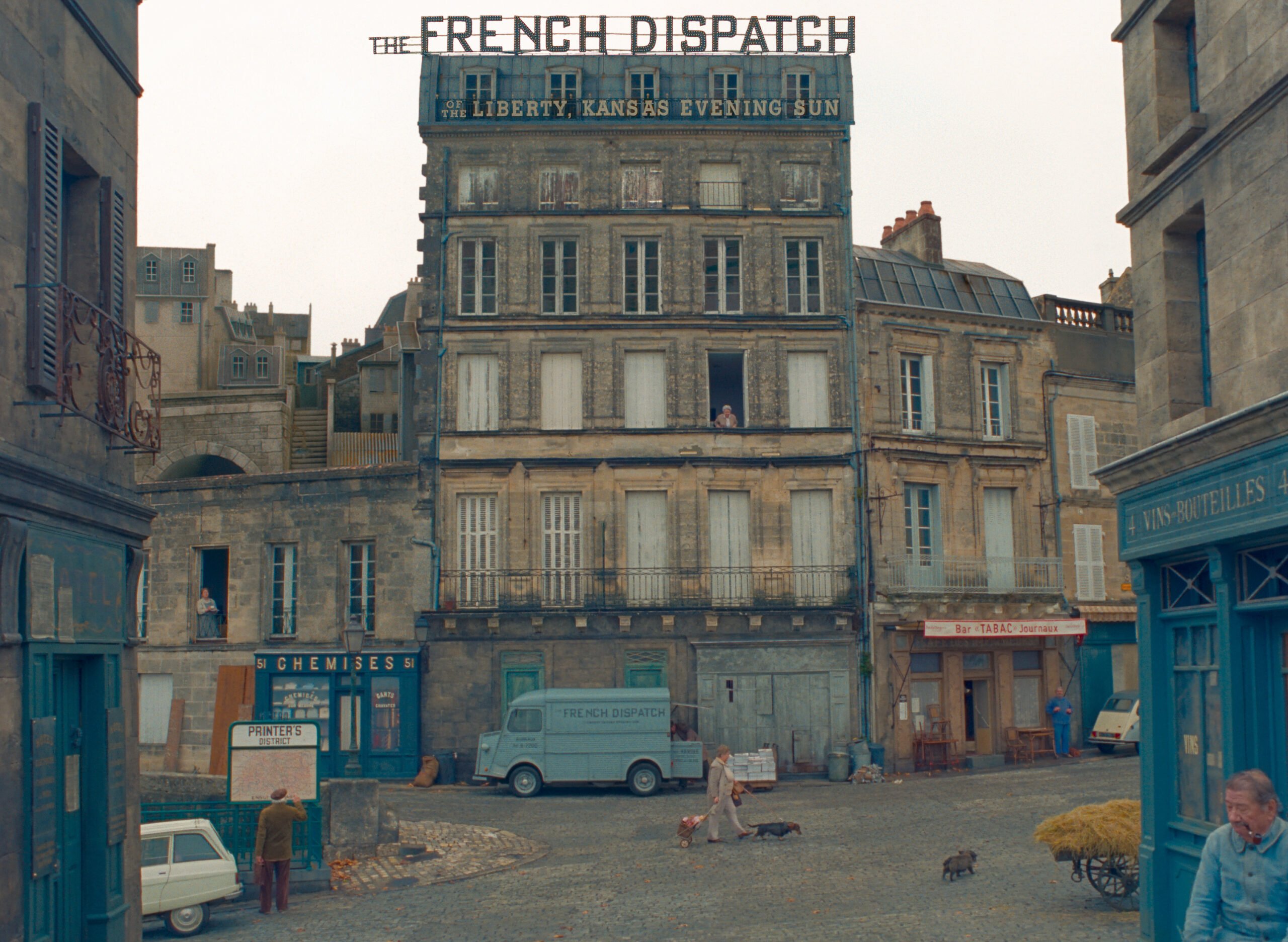 What is it about Wes Anderson’s films? They’re stylish, playful, and poignant. They attract big-name stars that mix with relative unknowns who all get to embody quirky and caricatured roles. His visuals are as articulate as his scripts and give movies like The Royal Tenenbaums, The Life Aquatic with Steve Zissou, and The Grand Budapest Hotel their eloquent flavor. Anderson’s latest film, The French Dispatch, is presented as a tantalizing anthology of stories that give you more tediously designed bang for your buck.

Anderson makes live-action neo-baroque cartoons. He creates heightened worlds with exaggerated societies in which he immerses his characters that all belong to an aesthetic he’s honed for decades. Naturalism is employed like saffron; accentuating his screenplays’ dramatic moments. Think of The French Dispatch as a Saturday morning cartoon block. A fizzy mix of Wes Anderson tales that you’ll want to watch for hours longer than the runtime allows. Along with the wonderfully conducive format, Anderson appropriately champions the value of auteurship using a nesting doll of artistic parables.

Anderson’s latest film blended two ideas he’d been wanting to pursue. The first is an ode to the famed highbrow magazine The New Yorker. The second is a story about American ex-pats abroad in Europe. Together, they form the film’s framing device: a fictional publication called The French Dispatch based in the also fictional locale of Ennui-sur-Blasé, France. It’s perfect fodder for the writer/director’s brand of elbow patch comedy.

The film follows the outlet’s founder and editor, Arthur Howitzer Jr. (Bill Murray), as he assembles the next issue of The French Dispatch. Each segment of the film is dedicated to a different section of the magazine with pieces by the bicycling reporter Herbsaint Sazerac (Owen Wilson), art critic J.K.L. Berensen (Tilda Swinton), essayist Lucinda Krementz (Frances McDormand), and feature writer Roebuck Wright (Jeffrey Wright).

True to journalistic culture, each writer mounts varying degrees of defense for their work against Howitzer Jr’s notes. What’s uncharacteristic is how much Howitzer Jr. acquiesces to his writers’ arguments. The editor has a deep appreciation for the style and personality of his writing staff and goes to bat for them when others express critiques. This is a perspective in which Anderson has a personal stake. He’s a filmmaker with a style that has blossomed with the increasing amounts of leeway and resources he’s received. It’s a trust he’s earned and the basis for his comment that studios need to grant the same to their filmmakers in the age of top-down controlled franchise IP cinema.

Anderson’s favorite themes to explore are also present. The family unit, particularly found families like Zissou’s team in The Life Aquatic and the staff at The Grand Budapest Hotel is represented in the Dispatch’s employees. His interest in patriarchal figures like Royal Tenenbaum and M. Gustave lives on in Howitzer Jr. The discordant tone of class conflict in Rushmore, The Life Aquatic, and many of his other films bursts into literal class warfare in the Politics & Poetry section, which follows a general strike by the disenchanted youth of Ennui lead by the impassioned Zeffirelli (Timothée Chalamet) and Juliette (Lyna Khoudri).

What’s clear is Anderson’s particular predilection for stage plays. It manifests in how he elaborates his practical set design and is embodied by one of his early protagonists, the playwright Max Fischer from Rushmore. He often establishes scenes with neatly blocked players, posing as if they were part of a still life painting; the same way a scene will begin on stage. In The French Dispatch’s Arts & Artists segment, which focuses on a genius incarcerated painter (Benicio Del Toro), Anderson expertly crafts action-packed motionless tableaus that depict a calamitous prison fight scene in intricate detail.

Part of the magic that Anderson imbues in his films comes from another stage trick—the reveal. On stage, sets are built to depict a smaller setting that then opens up to show a much larger scene. Previously, Anderson employed this while presenting the cross-section of Steve Zissou’s boat the Belafonte in The Life Aquatic. He utilizes this technique in the Politics & Poetry section during a breathless bar sequence that creates a stunning unmasking of the set that provides a sensation typically confined to a Broadway theater.

As a cinematic artist, he often uses the camera to surprise with “but wait, there’s more!” He’ll push the camera sideways or zoom out to show what else is going on in the scene, often as a punchline to the initial frame. Much of the film is in black and white, a format you’d think would be counterproductive to an artist who so relishes their rich color palettes but Anderson brilliantly utilizes this for a cinematic reveal. In the Tastes & Smells segment, a shot that circles around a dinner table snap into color in mid-rotation. Anderson’s palette is reintroduced as well as unexpected surprises such as an elderly woman’s hair which reads as simply gray in the monochrome format are revealed to be a bright purple.

The French Dispatch proves it was worth the wait. It was delayed a year because of the COVID pandemic and as it hits theaters this October, Anderson is already in production for his next film “Asteroid City.” The filmmaker is at the peak of his game and it will be interesting to see how he will further explore or subvert his unique voice.