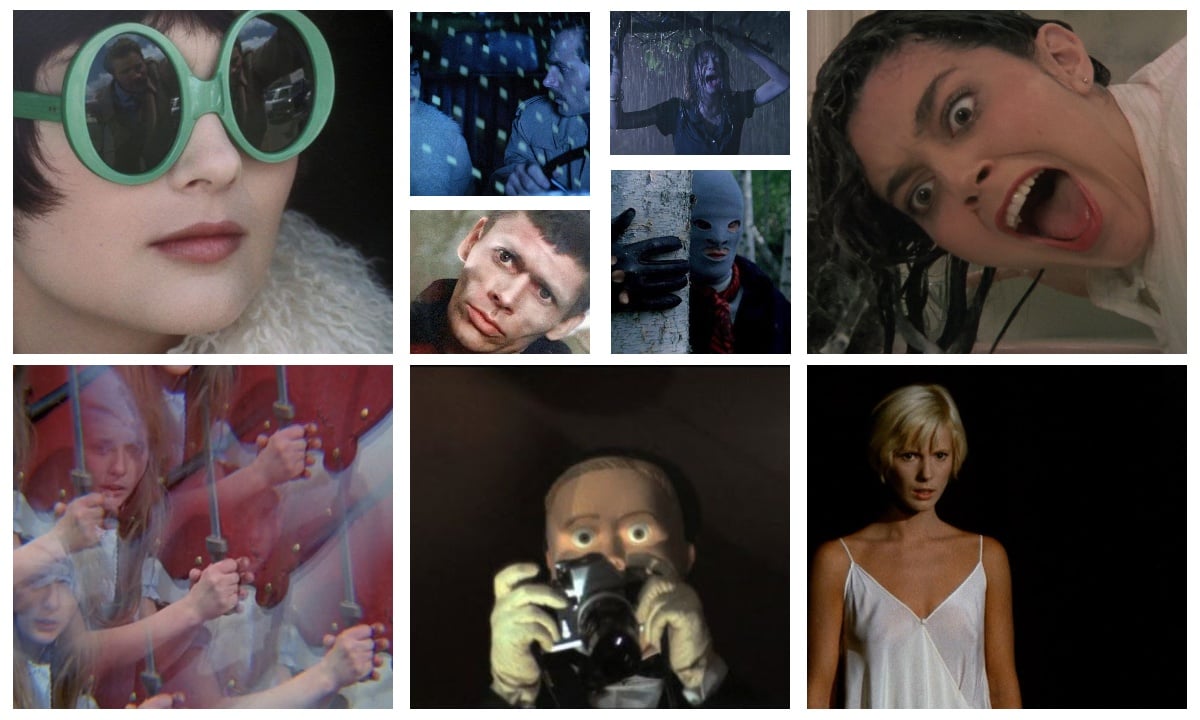 What are the Best Giallo Films to Stream?

The term “Giallo” initially referred to cheap yellow paperbacks (printed American mysteries from writers such as Agatha Christie), that were distributed in post-fascist Italy. Applied to cinema, the genre is comprised of equal parts early pulp thrillers, mystery novels, with a willingness to gleefully explore onscreen sex and violence in provocative, innovative ways. Giallos are strikingly different from American crime films: they value style and plot over characterization and tend towards unapologetic displays of violence, sexual content, and taboo exploration. The genre is known for stylistic excess, characterized by unnatural yet intriguing lighting techniques, convoluted plots, red herrings, extended murder sequences, excessive bloodletting, stylish camerawork, and unusual musical arrangements. Amidst the killer set-pieces are thematic undercurrents along with a whodunit element, usually some sort of twist ending. Here is a list of the best Giallo films – made strictly by Italian directors, so don’t expect Black Swan, Amer, Perfect Blue, or even Dressed to Kill to make an appearance on this list.

Prolific Italian genre filmmaker Sergio Martino started his career as an assistant director for filmmakers such as Mario Bava and Brunello Rondi before moving into directing himself, with the 1969 documentary Mondo Sex. Over the next three decades, Martino was responsible for some of the more exploitative films in a number of genres, moving from spaghetti Westerns to Giallos to gritty crime films, sex comedies, jungle adventures, and apocalyptic science fiction. He is one of the most overlooked genre filmmakers from Europe, and certainly one of my all-time favourites. Torso (I corpi presentano tracce di violenza carnale) pales next to director Martino’s more inventive Giallos (see below), but there is still a lot to love about the film. The movie definitely improves in the second half, when it switches focus from being a broad murder mystery to more of a suspense thriller. The plot of the killer terrorizing Rome’s college students is hardly new (even for the time) but the murder sequences are artfully staged and strangely beautiful to watch: most notable is the one in which the killer stalks his victim through a muddy field. Torso is overloaded with red herrings and doesn’t feature the most complicated of whodunits, but Martino has his fun getting to the conclusion and so will you.

A Blade In The Dark (La casa con la scala nel buio) comes from the director of Demons, and is written by the scribes of Lucio Fulci’s The Beyond and Mario Bava’s Bay of Blood. There are a few reasons why this film stands apart from most generic Giallo films. First, the movie co-stars Michele Soavi, who would go on to direct Cemetery Man and Stage Fright. Secondly, the film may have clearly inspired Wes Craven’s Scream 3, another horror movie about the making of a horror movie. Finally, it features a memorable kill scene, which does for washing your hair in the sink what Hitchcock’s Psycho did for taking a shower. That said, the ending is a bit predictable, there isn’t much of a mystery, and it’s a brutal, nihilistic bit of filmmaking that some could easily interpret as an exercise in misogynistic sadism, so see it at your own risk.

Asia Argento stars in Trauma, Dario Argento’s first production on American soil and although it doesn’t quite match the mastery of his previous work, Trauma is stuffed full of wild bursts of imagination. On American turf, Argento’s distinctly European sensibility is missed, but Trauma does feature some bizarre plot twists, a strange séance, and a dozen or so ways to creatively decapitate a human being. Lizards appear throughout the film, intercut with the killings as a motif, and much like The Bird with the Crystal Plumage, Trauma toys with perception and the idea of how our eyes can play tricks on us. Trauma showcase Argento’s funny bone more so than any of his other films as evidenced in the strange closing credits, with Asia Argento dancing around a Reggae band and a few talking decapitated heads.

Director Luigi Bazzoni’s beautifully crafted, nuanced contribution to the endless Giallo cycle is perfectly summed up as “style over substance.” That said, The Fifth Cord (Giornata nera per l’ariete) is also highlighted by Franco Nero, starring in his one and only entry in the genre. The Fifth Cord can be difficult to get immersed in, but the cinematography and the score by the legendary Ennio Morricone are brilliant, and the film features quite a few memorable moments – specifically in the suspenseful climax through the endless corridors.

Four Flies on Grey Velvet (4 mosche di velluto grigio) is the final film in Dario Argento’s infamous (but in no way structurally connected) “animal trilogy.” Four Flies literalizes the eye as a photographic camera, toying with the theory that a dead person’s retina retains the last image he or she sees before they die. This especially homoerotic entry into Argento’s canon borrows heavily from Peeping Tom and injects one of Hitchcock’s favorite subjects into the script: the innocent man, wrongly accused. Ennio Morricone’s expressive score provides moments of beauty and quiet despair, and Argento’s use of light and shadow heightens the terror. Four Flies on Grey Velvet shows Argento experimenting more with filmmaking techniques— a technical wonder for its time of release, Four Flies proudly boasts the first use of a slow-motion bullet effect in film, pre-dating The Matrix and many action films to come.

This candy-colored, feverish, mind-twisting nightmare is one of the strangest Giallos ever. In the Folds of the Flesh (Nelle pieghe della carne) packs more bizarre ideas and offbeat elements into its brief 87 minutes than any other film featured on this list. All the usual genre trappings are present and accounted for: femme fatales, clouded flashbacks, gruesome killings and so on. Fusing together the mainstays of the subgenre, director Sergio Berzonzelli (who directed a number of entries into the Italian cult film scene) also finds time for incest, child killers, caged flesh-eating birds, golden beetles, a cyanide bath to eliminate dead bodies, and Nazi war camp sequences. In the Fold of the Flesh consists solely of a series of shocking scenes strung together with virtually no cohesive narrative, yet somehow it is a rewarding watch. It’s almost pointless to attempt to describe the madness that unfolds. None of the characters are mentally stable, and they are all haunted by some past traumatic experience in the form of the film’s opening decapitation (a recurring theme), The film looks gorgeous, with its lavish decorations, lurid set design, a palette bursting with primary colours and Bergonzelli’s fondness for unorthodox camera angles and still photography. Jesús Villa Rojo provides an eclectic score ranging from contemporary jazz to classical compositions and inter-titles appear from time to time (with a few spelling errors). There is even a narrator who attempts to explain the origin of the film’s title with a Freud quotation: “…what has been remaining imbedded in the brain nestled in the folds of the flesh distorted its conditions and subconsciously impels…”

Director Luigi Cozzi crafted a suspenseful thriller with The Killer Must Kill Again ((L’assassino è costretto ad uccidere ancora). Indebted to Alfred Hitchcock (like most Giallos), The Killer Must Kill Again plays like a twisted hybrid of Strangers on a Train (two protagonists who swap murders along with a vital cigarette lighter which plays a key role in the conclusion) and Dial M for Murder (with the cunning rich man who arranges his wife’s murder). Most notable about the film is the music, an early Italian progressive jazz score by Nando De Luca, and the uniformly strong cast which includes the beautiful Christina Galbo and George Hilton who plays the shady rich guy perfectly. The film is visually striking, mostly shot at night, punctuated with vivid bursts of colour, and benefits from a satisfying climax.

Share
Tweet
Reddit
Share
Email
WhatsApp
Pin
More
In this article:31 Days of Horror, A Blade in the Dark, Four Flies on Grey Velvet, Giallo, Horror, In The Folds Of The Flesh, The Fifth Cord, The Killer Must Kill Again, Torso, Trauma
Up Next:

Knives Out: The 27 Best Giallo Films