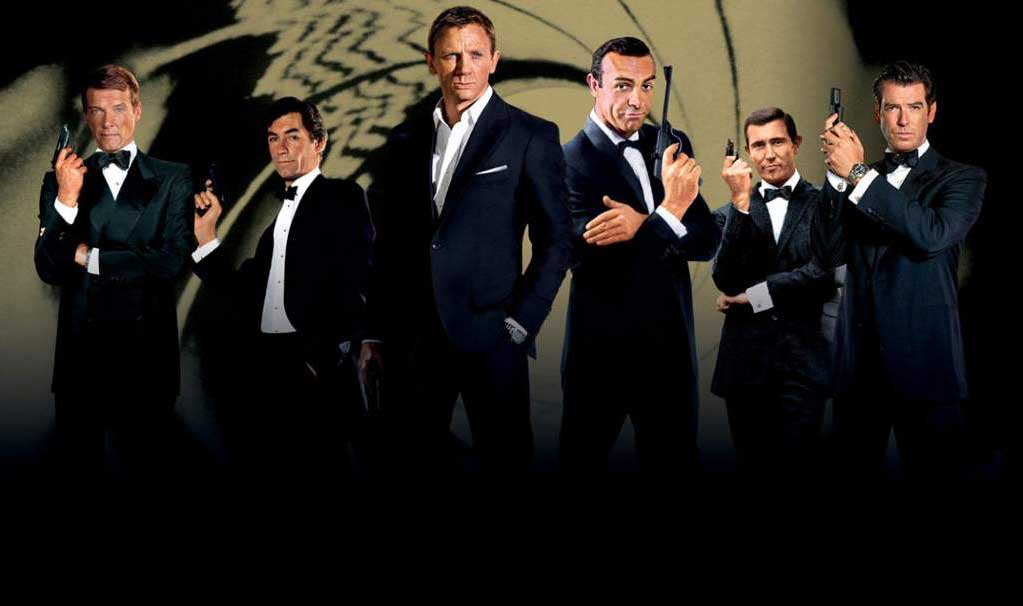 Back in 2012, my colleagues and I decided to group together and come up with a list of the best films in the 007, James Bond franchise. With No Time To Die rolling out this month, we decided to republish the article. Let us know which is your favourite James Bond movie in the comments below.

#1: From Russia With Love

50 years later, and with twenty-three “official” entries, From Russia With Love represents the very best of the Bond franchise. Skyfall is the closest to be considered, at best – almost equal to what was achieved in ’64 – but From Russia With Love is still unparalleled. Although it is the second in the series, and although it feels like no Bond film that followed, it is the film that solidifies all the Bond elements into a formula – a template that carries on, even today.

SPECTRE’s Persian-stroking nemesis/mastermind Ernest Blofeld makes his first appearance and so does Desmond Llewelyn’s gadget-friendly Q (starting a run that continued until his death in 1999). Screenwriters Richard Maibaum and Johanna Harwood return, as do director and editor Terence Young and Peter Hunt. John Barry supplies the fine score by utilizing Monte Norman’s theme, and Sean Connery stars in his second of six 007 films. These elements and contributors all push the movie closer to the recognizable “Bond formula”, more so than its predecessor, Dr. No. (Ricky D)

Time and time again the legendary James Bond film franchise has learned to adapt and survive. Survival of the fittest, if you will. Whether the reasons for concern were changes in the actor playing the part, the loss of a producer, turbulent waters for the studio’s finances, changes in screenwriters, or the lack of anymore Ian Fleming material upon which new adventures can be penned, the series has always quickly learned to get back on its feet to thrill and amuse audiences the world over. Even within the films themselves, the plots have almost always reflected new geopolitical paradigms, as well as cultural morays and trends in pop culture. James Bond is always recognizable, and yet he can adapt if need be. 50 years after the release of the first official film, Dr. No, Skyfall was unleashed unto the world, a film that simultaneously pays tribute to the franchise, the character of Bond, creates a bold, original story and helps remind audiences that there is always a place for 007 at the theater. (Edgar Chaput)

I suppose one of the best aspects of Casino Royale is how it toes the line between reality and overwrought silliness, maintaining that balance throughout. The way Campbell and screenwriters Neal Purvis and Robert Wade (who have been around the series since GoldenEye, surprisingly) & Paul Haggis build tension is exemplary for a simple reason: we all know James Bond is going to survive. Hell, in the ads for Skyfall, we see 007 being shot and apparently killed, but no one among us actually thinks he’s dead for good. He’s James Bond, for God’s sake. James Bond doesn’t die. With that knowledge always present, any tension is a welcome breath of fresh air, because how can you create suspense surrounding a character who will make it through any situation he’s presented with? Campbell, Purvis, Wade, and Haggis get it right because it’s not about if Bond will make it out alive, it’s how. How can he revive himself with only seconds to spare after he’s given a drink laced with poison? Through the system installed in his brand-new car, of course! …Except the wires aren’t hooked up correctly, so down goes Bond. He’s saved by his love interest, Vesper Lynd, quickly enough; still, Casino Royale pushes Bond to his breaking point often, raising the stakes each time. (Josh Spiegel)

What makes Goldeneye really stand out though is the motivations of its villain and double agent Alec Trevelyan. His goals reach beyond the machinations of your stock Bond villain bent on world or territorial domination or consumption- when it comes down to it, all Trevelyan really cares about is getting his pound of flesh from Bond and England. The fact that he hijacks a Russian nuclear satellite to send the U.K. back into the Dark Ages by firing off an EMP feels like an afterthought when compared to a blood feud he wants to settle going back to atrocities committed against his family by Britain at the outset of the Cold War. The fact that the story brings in this sense of world history and bookends the Cold War in this grisly way helps keep the plot moving along nicely and brings an emotional complexity and entanglement to all the major players involved. Indeed, Goldeneye is not only a terrific exercise in blockbuster filmmaking including some incredible action sequences and performances which even inspired and spawned a classic blockbuster multiplayer gaming experience on the Nintendo 64 but stood as a testament to the fact that sometimes you can really teach a new dog new tricks. (Gregory Ashman)

Author Ian Fleming had been seeking out a movie deal for nearly a decade until the rights for his novels were finally bought by producers Harry Saltzman and Albert R. Broccoli. Little did they know they would change the landscape of spy-action cinema forever with the release of Dr. No.

Dr. No was the first James Bond novel turned into a film, though it was the sixth novel in the book series The film was adapted by Wolf Mankowitz (who went uncredited by request, fearing the film would bomb), Johanna Harwood (the first and only women screenwriter of the franchise), Berkeley Mather, and long time contributor Richard Maibaum. Arguably Dr. No is one of the closest cinematic interpretations of any Bond novel in tone and plot. The changes they made were mostly cosmetic save for some minor plot details such as the filmmakers’ decision to eliminate the Cold War elements of the books by making the titular villain a fictional terrorist and the head of an organization called SPECTRE.

Dr. No is fairly stripped down compared to all future entries; a surprisingly modest spy yarn, notable mainly for its cold nature. Bond comes across more like a detective than he does in any other entry. While the film includes a killer tarantula, one underwhelming car chase, some flame throwers, a few gumshoes and plenty of mayhem and drivel, Dr. No features very little action. And for what was supposed to be an action film, Terence Young (who would go on to helm three entries in total) directs with a tongue-in-cheek style, an approach that set the groundwork for the future of the franchise. (Ricky D)

Being a relative novice to the James Bond canon, I have never grown accustomed to the many  colorful details that have leaked from the Bond films into popular culture. Thunderball, as I discovered, is the home to many of the Bond clichés, as they’ve more or less become. It is, from what I can understand, the mold that which every Bond film is created.

There are the clever puns delivered with a wink, daring escapes using proto-gadgets that bend the boundaries of belief, the beautiful women, seemingly hypnotized by the smooth debonair Bond, and of course, the cartoonish villain and his cartoonish plot to conquer, or destroy the world.

These are all earmarks of every Bond film, past, present, and future. And though there were films that used these ideas before and even Bond films that used the same formula, Thunderball feels like the first Bond film that was completely aware of this precedent, and relished every moment. (James Merolla)

Even if you had never seen this film, just as with Ursula Andress rising from the waves like a bikini-clad version of Botticelli’s Venus in Dr. No, you’d recognize the iconic image. The girl, the bed, the gold paint. The sight of gilded Shirley Eaton spread out on the sheets is so evocative that – like Ursula – it was subjected to an ironic nod in a later Bond film. If Halle Berry wore the updated bikini in Die Another Day, instead of gold Gemma Arterton did sheet-duty wearing nothing but a coat of oil for Quantum of Solace.

Gold was the symbol of wealth in 1964, but in today’s world of global warming and fuel station queues, hydrocarbons have taken their place in the cultural lexicon. And Goldfinger is a very old fashioned film – right from the overblown title song (Shirley Bassey chewing the vocals like only a Cardiff girl can), through to Oddjob with his killer bowler and Pussy Galore in skintight leather – the third Bond film is as dated as a High School cheerleader.

Old fashioned? Yes. A classic? Also yes. Goldfinger is one of the few Bond films with a 24-carat quality that warrants repeated viewing. (Cath Murphy)

#8: On Her Majesty’s Secret Service

Seen as an outlier by most due to Lazenby’s stiff, one-and-done portrayal of the world’s most famous secret agent, On Her Majesty’s Secret Service reveals itself as one of the greatest of Bond films upon a second look. One can only hope its reputation grows as the more realistic, character-driven modern series of Daniel Craig portrayals becomes increasingly popular. To seek out OHMSS is to experience a challenging, invigorating and romantic piece of action filmmaking that deserves a higher place of honor in the world’s best-known film series. (Gabriel Bucsko)

Even with the flaws, License to Kill remains in the top tier of Bond movies. One of the main reasons is Robert Davi, who makes Sanchez a charismatic yet believable villain. He doesn’t have a problem getting his hands dirty and is a formidable adversary. Character actors like Anthony Zerbe, Everett McGill, and a very young Benicio Del Toro round out the cast nicely. There’s even a Wayne Newton appearance as a slimy evangelist who’s the perfect front for the criminal organization. Although it wasn’t a huge financial success in U.S., there are understandable reasons for the weaker box office. The summer of 1989 included massive hits like Batman, Lethal Weapon 2, and Indiana Jones and the Last Crusade to steal Bond’s thunder. Dalton was ready to return for a third movie, but legal troubles with the studio dragged too long for his liking. The spin for Goldeneye was a return to a “fun Bond”, but that unfairly diminishes Dalton’s accomplishments. He deserves tremendous credit for crafting a different character that set the stage for Craig to take him to the next level 17 years later. (Dan Heaton)

Kenneth Lonergan’s Margaret is a Near-Masterpiece