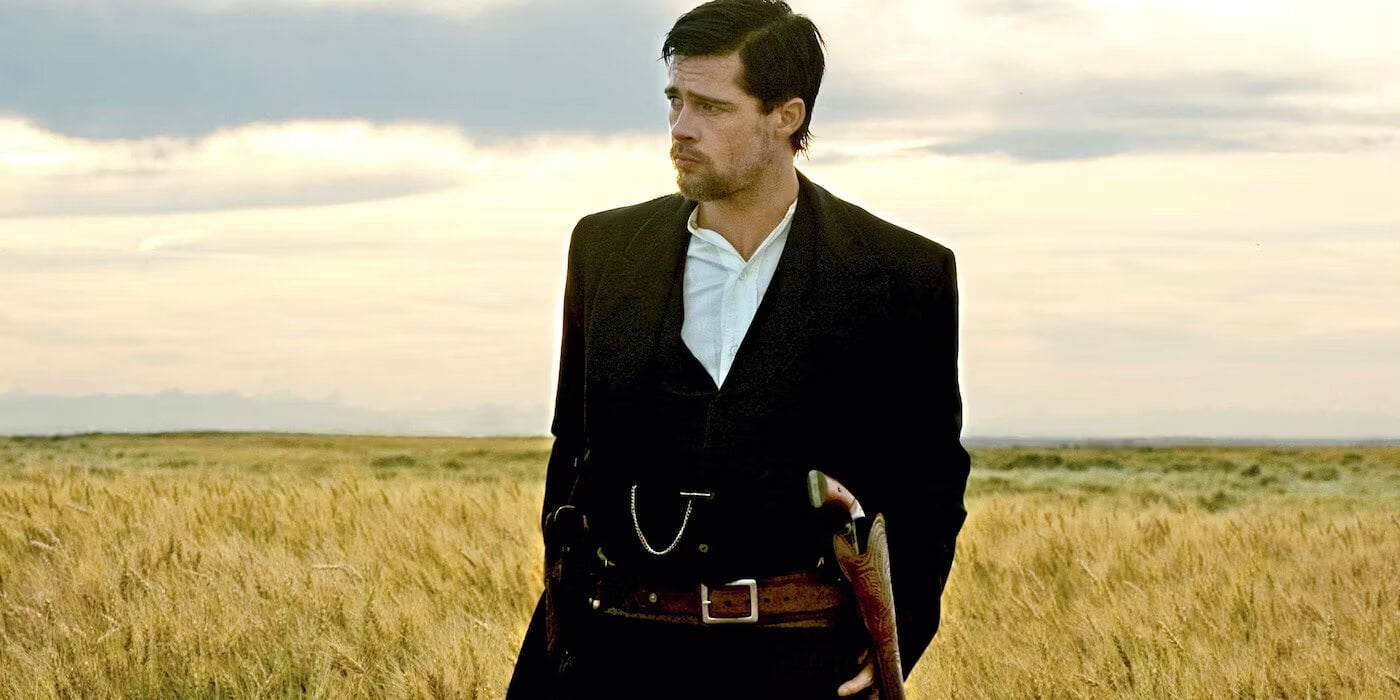 The Assassination of Jesse James by the Coward Robert Ford, much like its unwieldy and long-winded title, is a lengthy, slow-burn of an epic western that glides across its dreamlike 160-minute runtime, unearthing arguably the greatest examination of the mythos of the old west — all wrapped up in one of the best-looking experiences of all time.

However, upon its release in 2007 —15 years ago this month — it was a bonafide flop for Warner Brothers, as it grossed just $4 million domestically against a $30 million production budget. Its worldwide total of $15 million only served to cement it as a box-office failure.

In the years since, Jesse James has rightly emerged as one of the definitive works of the 21st Century, and of the western genre itself. Roger Deakins’ now-legendary cinematography, Nick Cave and Warren Ellis’ hypnotic, elegiac score, and Brad Pitt’s deeply vulnerable performance all seamlessly work in unison to peel back the layers and reveal a raw humanity that is oft-forgotten in our most mythic of figures.

Writer-director Andrew Dominik opts not to peer into the annals of history, but its more fabricated parallels, addressing the penchant for turning human beings into deities. He transforms cold facts into warm, awe-inspiring fiction that often evokes greater truths than the records that first solidified the legend. By superseding the harsh, objective permanence of history, Dominik finds greater, biting realities in his picturization of the man behind the inescapable name—Jesse James.

Melding a realistic approach with a dreamlike fervor, Dominik doesn’t limit his scope to depicting how the legend came to be but also points his brush on the deeply flawed individual underneath the guise — who is far more pathetic and deranged than his famed visage makes him out to be.

Brad Pitt wonderfully taps into this portrait, as his performance is not of a cunning and vicious gunslinger, but of a neurotic, self-obsessed man who often bumbles his way to a feared reputation. Pitt revels in his abrupt mood swings, spurts of peculiarity, and innate melancholy, giving force to a wild personality that conjures traits associated with mental illnesses such as bipolar disorder. Without ways to remedy such an affliction in the 19th century, Pitt’s understated evocation of such harsh realities instills a subtle tragedy onto the enigmatic tapestry of Jesse James —whose violent paranoia evades the law but not the demons enveloping his mind.

Yet, Pitt’s poignant and restrained realization of these disorders never comes across as shameless and exploitative, simply because Dominik refuses to render James a paradigm. It makes for a wildly unpredictable character, who one second espouses genuine compassion and an unhinged murderous quality the next. Dominik and Pitt not only create an intriguing, intimidating character but also a complete person.

It’s clear to see why Dominik chose Pitt for the part, as the role offered him the perfect opportunity to break down the superstar persona that has shrouded the better part of his career, much like the outlaw legend he portrays. It’s an all-too poetic parallel that further cement the dreamy excellence of this western epic.

Casey Affleck also shines just as bright as Pitt, as he powerfully personifies the feelings of living in the shadow of a legend.  His juvenile gestures and mannerisms beautifully capture the anxiety and depression underpinning the film, as his legacy as a cowardly assassin is brought to life with his nearly impenetrable look of resentment. His performance is perhaps even more enigmatic than the central, looming figure of James, as we attempt to decipher his longing stares and ultimate reckoning with a fame void of admiration.

Even so, Jesse James’ crowning achievement comes at the hands of Roger Deakins. His breathtaking cinematography marks the zenith of his career (a statement he notably agrees with).  His sweeping lens takes full advantage of the period setting and its untapped natural world, finding a mesmerizing equilibrium between profound subtlety and sheer maximalism, creating specific shots, frames, and compositions that will stand the test of time. Many scenes are filtered through a slightly muddled, ethereal lens that renders the American frontier a waking memory, a distant dreamscape that houses the deities and legends that have come to capture our collective imaginations, ultimately weaving themselves into the cultural fabric of a nation.

It all coalesces in the hauntingly beautiful “Train Robbery” sequence. Deakins’ mastery of lighting and shadows is on full display as he creates stunning silhouettes of bandanaed outlaws that evoke the cinematic origins of the genre. At once, the visuals both bask in the glorious iconography it creates and the farcical robbery that soon follows. Couple this with Nick Cave and Warren Ellis’ dark, dreamlike cacophony of strings and percussion, and a truly cinematic wonder is born.

The Assassination of Jesse James by the Coward Robert Ford is not only a great treatise on the fading myth of the west and the legends it birthed but also a definitive addition to the western canon, as its revisionism has had an immense impact on the genre’s ultimate trajectory. Its vestiges can distinctly be felt in certain pop culture phenomena like Red Dead Redemption II, whose wistful narrative and illusory time lapses are rooted in the same visual and thematic language of Dominik’s masterpiece.

With the release of Blonde this month, Dominik trains his eye on yet another misunderstood icon in Marilyn Monroe, cementing himself as an artist who is not only fascinated with the idols who define the American zeitgeist but the very nature of deification.