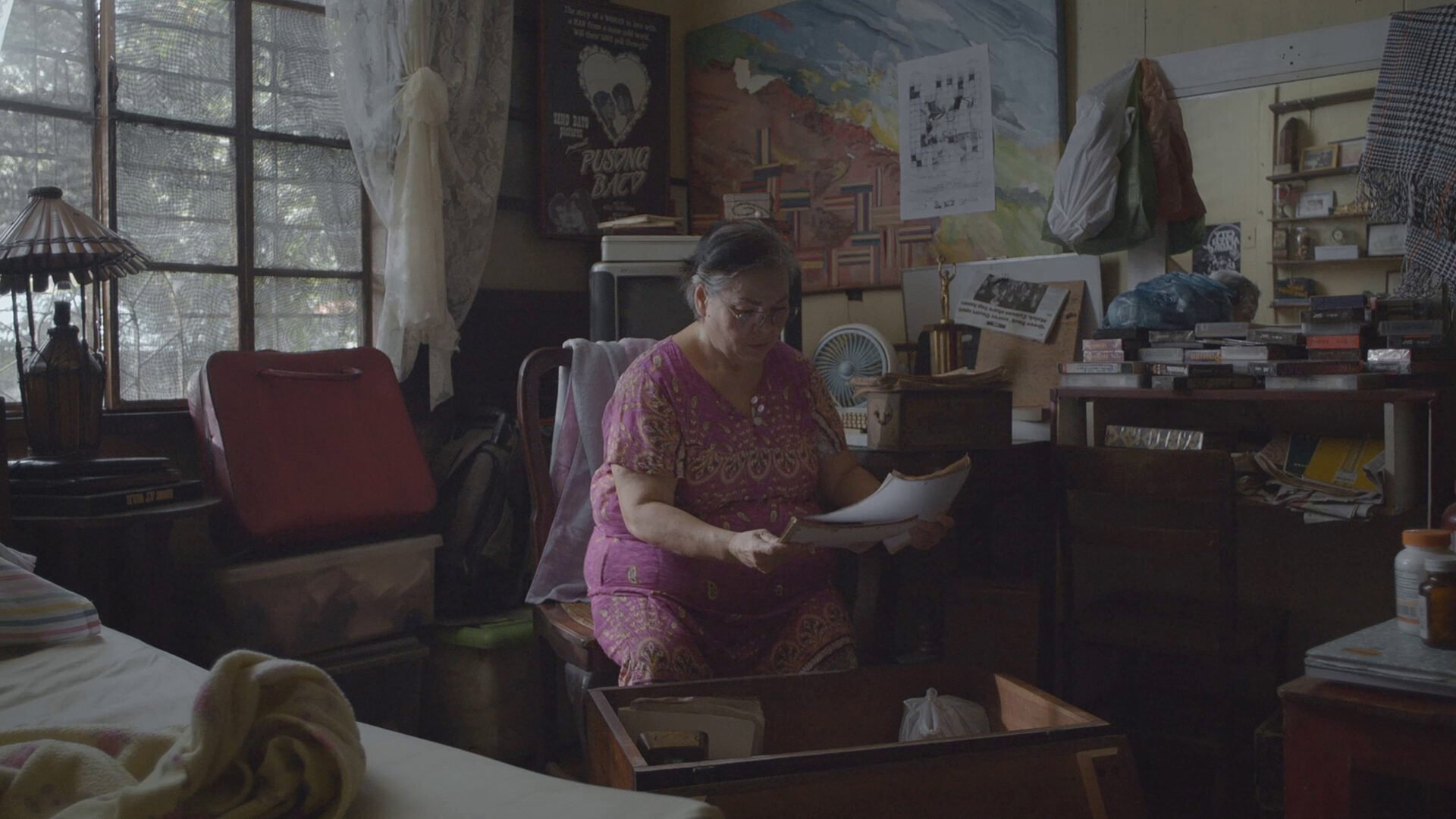 Using cinema to put her own spin on the events of her life, Leonor Reyes (Sheila Francisco) is very much alive. Martika Ramirez Escobar’s ode to cinema – specifically Filipino action films of the 80s – is a delightful debut feature that plays with its storytelling without sacrificing any of its emotion. Even when it feels like it’s running out of steam, Leonor Will Never Die remains endearing while celebrating the support systems that keep passion and creativity alive.

At the heart of Ramirez Escobar’s film is its lead performance from Francisco. While her character begins the film as passive and ready to unburden her son, Rudie (Bong Cabrera), with the responsibility of taking care of her, Leonor’s presence becomes more palpable as she takes agency over her life. It begins with an unfinished screenplay for a film she stopped writing after retiring from writing and directing action films. When money becomes so tight that her electricity is threatened to be turned off, Leonor dusts off the screenplay and tries to finish the story of a young man named Ronwaldo (played by Rocky Salumbides) and his quest to avenge his brother’s murder.

It’s when the film moves from imagination to active participant that Leonor Will Never Die finds its unique charms. After an accident puts her into a coma, Leonor finds herself within her unfinished screenplay and must now aid Ronwaldo and find a way out. Meanwhile, Rudie is trying to get the screenplay sold so Leonor doesn’t have to struggle. Despite the ease with which Leonor and the film could get lost within the incomplete action movie that’s literally writing and rewriting itself, Ramirez Escobar wisely keeps checking back in with reality. On the one hand, the film within the film is far more entertaining, but the screenplay seems well aware of that and frequently draws parallels between Leonor’s life and the screenplay she’s written.

Occasionally redundant, Leonor Will Never Die’s only real fault is that when Leonor isn’t on screen, the film feels like it’s on autopilot. Frequent spectral appearances by Rudie’s brother, Ronwaldo (played outside of the film-within-a-film by Anthony Falcon), who recently passed from an accident tries to tie Leonor and Rudie closer together through their shared grief. There’s an earnest attempt to make Rudie a more interesting character, but he pales in comparison and Cabrera simply lacks the presence necessary. It’s somewhat narratively justified, though every cut back to Leonor’s experiences within her film only accentuates the power that cinema holds over real life.

Leonor Will Never Die is constantly toying with its form, exploring a fascination with action films and trying to reason why they’re so entertaining. It’s the heightened, but reflective nature of cinema that Ramirez Escobar seems most fascinated with throughout. Leonor draws upon her own life experiences when writing characters, but when placed in the film itself she tries to stay in the background. It’s the characters around her that bolster her confidence and push her to become a more active participant in her own movie.

Another parallel that fits neatly is the act of making a film itself – surrounded by other creative types all seeking a similar goal and pushing each other to the finish line. Leonor Will Never Die begins focused on a woman trying to finish a project on her own and expands out into a community trying to help Leonor awake from her coma. All the while it’s having a conversation about the art of filmmaking and exploring what has driven a wedge between Leonor and her son Rudie.

Despite any shortcomings it may have, Leonor Will Never Die rarely loses focus. Every creative decision feels calculated, from the aspect ratio and visual quality shift when we enter Leonor’s film to the meta-narrative that encompasses everything, the passion of the filmmaking is felt in every beat. The fun nature of the premise and Francisco’s charming performance makes Leonor Will Never Die a heartfelt viewing experience that fans of action cinema will easily find themselves enamored by as well.

Speak No Evil is an Unpleasant Family Getaway