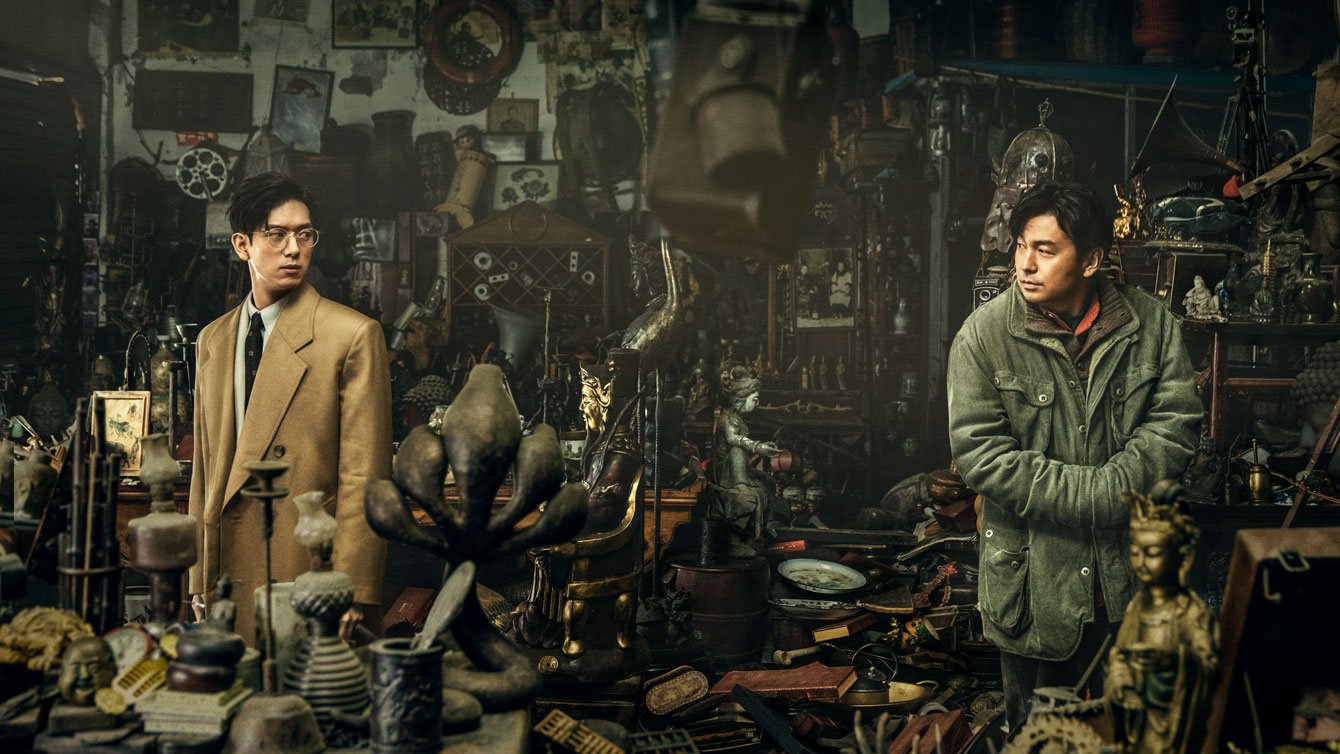 Brimming with the DNA of National Treasure by way of Antiques Roadshow, Schemes in Antiques is initially a lot of fun. It moves at a nice pace, injects a good amount of humor, style, and action into its runtime, and sets up an intriguing rivalry between families, positioned around an ancient Buddha head. Unfortunately, Derek Kwok’s latest film fails to ever find a solid footing, nor does its bumbling-yet-genius protagonist give the film any emotional drive to carry on. Instead, it’s Kwok’s ability to create spectacle out of even the most mundane premise that helps Schemes in Antiques barely sustain its otherwise predictable plotting.

A curse has seemingly loomed over Xu Yuan’s (Lei Jiayin) family since the removal of the Buddha head statue of Wu Zetian stoked the rivalry between Japan and China. His grandfather was executed, his father abandoned him, and now Yuan does little with his life besides soaking up alcohol and fixing electronics. However, he is still tremendously gifted with being able to suss out fake artifacts from the real ones and when he finds a chance to reclaim his family’s honor by finding the real Wu Zetian head statue, he snaps up the opportunity.

What should be a single-person effort to solve the mystery of the real statue becomes a race as Yao Bu Ran (Li Xian) attempts to recover the head before Yuan can do so. It’s never quite clear who is actually in the lead and that results in Schemes in Antiques always feeling more tense than it probably should be. It’s two people really good at appraising antiques that are following clues left behind by Yuan’s father that takes them to different parts of the world in search of the Buddha head.

Schemes in Antiques is actually far more interesting when it halts the stylish tendencies and tries to be a journey through China’s history and Yuan’s own personal lineage. He’s hardly an interesting character, but the impact of one action by one of his descendants has left an impact on the family name as well as China’s history itself. Unfortunately, Kwok keeps things too light so that when the exposition dumps and darker moments arrive, they never quite leave a mark. Instead, it’s a constant push and pull between maintaining momentum and actually diving into the history that is the soul of the film.

Where Schemes in Antiques hangs its hat is on the desire to be a fun adventure. It doesn’t really travel the globe too much, instead keeping things in its own backyard for large portions of the film, but it eventually steps outside of everyone’s comfort zone and tries to lean even more heavily on both comedy and adventure. Unfortunately again, it’s not adept at any of those things and relies too heavily on the assumption that Yuan is interesting enough to carry the film. Even with a charismatic performance from Lei Jiayin, it just never amounts to much.

There are far worse ways to spend your day and many of the bigger moments of Schemes in Antiques actually do maintain a sense of urgency that helps make the film feel snappier than it is. In reality, it’s a treasure hunt that spends a bit too much time on its rivalry without actually making either rival interesting enough to root for. A stylish but ultimately middling effort, Schemes in Antiques never quite realizes its potential and instead squanders it on a pedestrian screenplay that hints at further secrets buried beneath the surface.

Mars One Paints a Sincere Portrait of a Brazilian Family

The Tragedy of Macbeth is a Dreamlike Shakespeare Adaptation